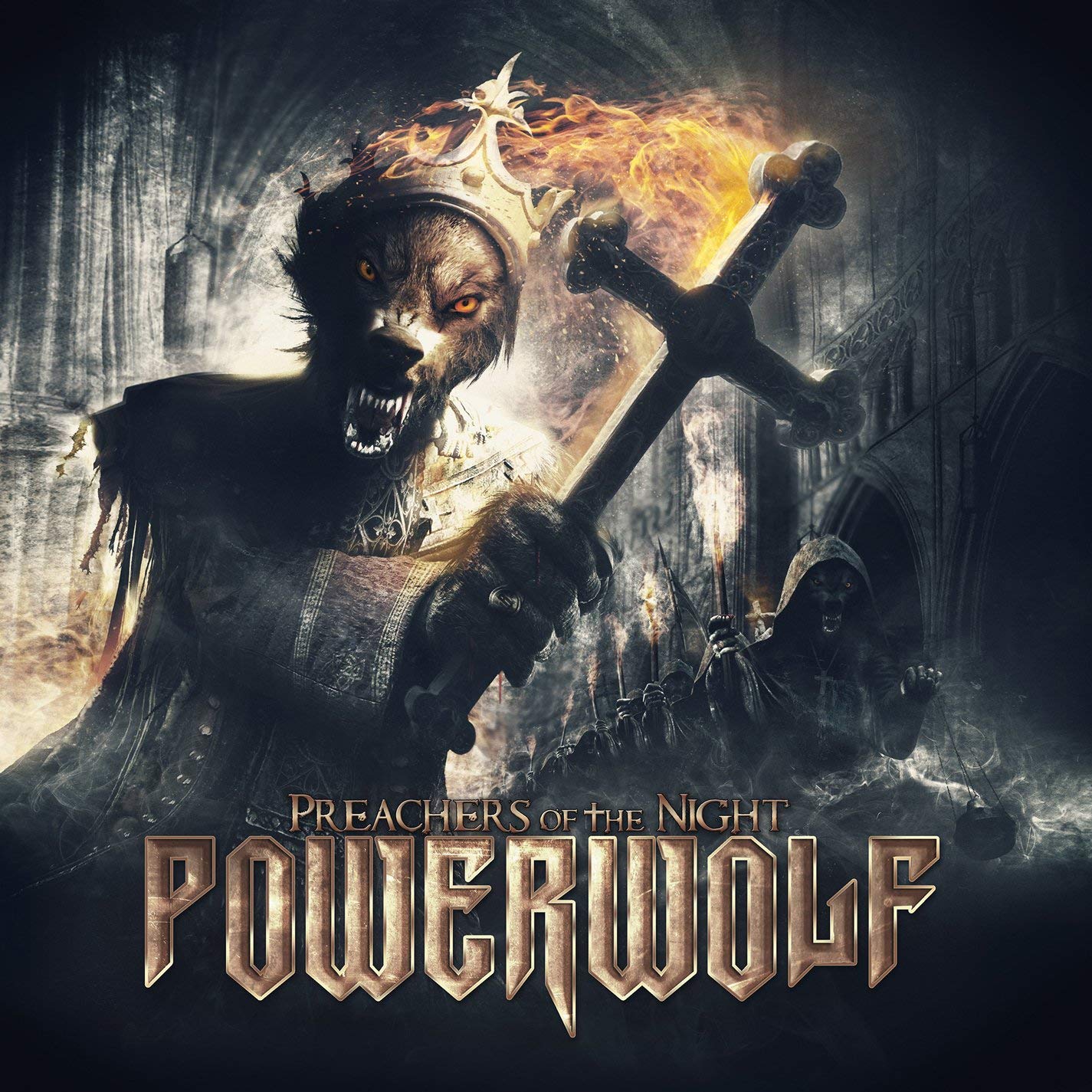 Powerwolf reveals Secrets from the Sacristy

“Raise Your Fist, Evangelist”, “Werewolves of Armenia”, “We Drink Your Blood” and “Resurrection By Erection” are just some of the song titles of this Germany-based power metal assault known as Powerwolf. Since 2003 album after album they have raised their own bar of creating catchy, yet unique songs with a visual image that would make even the beast from “The Howling” to crap in his pants (if he had any). Behind the visual image is bands co-founder, guitarist and professional graphic designer Matthew Greywolf. Heavy Music Artwork stepped into bands Sacristy and asked Mr Greywolf about music, design and staying in cellars.

HMA: Your singer Attila was found via coincidence but I believe you couldn’t find anyone better for the job?

Matthew Greywolf (Powerwolf): I think so too. It just clicked and we immediately had a common vision of what to achieve. We never wanted to have a singer sounding like those typical melodic metal singers, but one with a remarkable, heavy voice. By coincidence, we ended up finding such a singer, who also had this operatic style to offer.

HMA: You’re latest album ‘Preachers of the Night’ has been well received. How does it stand in Powerwolf musical evolution?

MG: I can´t judge this from my perspective as I´m too close to the project. I think we have managed to unite all our trademarks and strengths on this album and I love every single tone on it. But I don´t want to use phrases like ‘our best album’ or such, as this is in the listener’s point of view. What I can say for sure is that it is our heaviest and fastest one to date, haha.

HMA: What is your secret formula. I have many friends who have converted to PW fans after a few seconds of listening. Including my whole family.

MG: Good songs and an original sound, as simple as that. Our songs all have catchy melodies and hooks as well as this typical Powerwolf atmosphere. I don´t know any other band sounding like this. And even though I would definitely categorize Powerwolf a heavy metal band, we can attract a lot of non-metal listeners, which we take as a compliment. On our shows, we have fan ranging from 12 years to 70 years, and we´re proud of that.

MG: Hard to say since the crowds are crazy anywhere. But if I had to pick one country, then it would quite likely be Russia. People are totally crazy during the shows and overwhelmingly friendly and nice wherever we meet them in front of the Hotels or Airports.

HMA: You are one of those bands who has worked hard for their success. What are your thoughts on TV competitions like Idols or other talent shows, which gives a different image of how musicians work?

MG: I don´t even want to go as far as comparing this. It´s like comparing watching Science Fiction movies and actually flying to the moon, haha…. honestly: I don´t see a point in that entire ‘I-wanna-be-a-star’ thing. Wanting to be a star has nothing to do with the heartfelt desire to write and perform music. If you start making music with the goal to become a star… just don’t. If you feel like: ‘I will be playing music all my life even if nobody ever cares…’ then go for it.

HMA: PW album covers and packaging are extremely well designed mostly by yourself. How does the process go?

MG: When writing songs I imagine scenes belonging to the music. You might say I have movie-scenes in my head to any song we write. At the point when we finish the mix of the album I pick a few of these scenes, which I associate with the music and start visualizing them. For us it´s a great freedom to be able to realize all the packaging, the merch, the stage decorations and stuff ourselves, as this guarantees us to be able to realize exactly the vision we have, without any compromise.

HMA: Are you an educated graphic designer or self-learned?

MG: I´m an educated graphic designer and I love this job, even though I hardly work as a graphic designer nowadays since Powerwolf is taking all my energy and time. And as much as Powerwolf is the most incredible journey of my life, I miss the direct creation of creating graphics. One more reason why I enjoy doing the graphics job in Powerwolf at least.

HMA: Werewolves, vampires etc. Are you fans of horror and does horror movies play the part of your music and visual appearance?

MG: Not really to be honest. We all love some of the genre´s classics, but we hardly watch any new movies.

HMA: How important is a physical product in today’s more digitalized music world? What do you think will happen to CD’s and LP’s and DVD’s in future?

MG: They will stay, at least in Rock and metal music. I recently was pleased to see the LP returning even to the big stores.

HMA: What musical ambitions you still have? Where is Powerwolf in ten years?

MG: We have already achieved so much more than we ever dreamed of, like playing all over the world, even being on #1 in the German charts and all of that, there´s nothing left to wish for. All I wish for is to be able to continue doing this for quite a while. After all, being in a band is not about success or things you want to achieve. It´s about being out on the road with good friends.

HMA: Finally, what is your message to young wolfsters out there trying to rice from the cellars?

MG: Stay where you are, it´s cozy in the cellar and you avoid sunburn. Honestly, I love cellars.