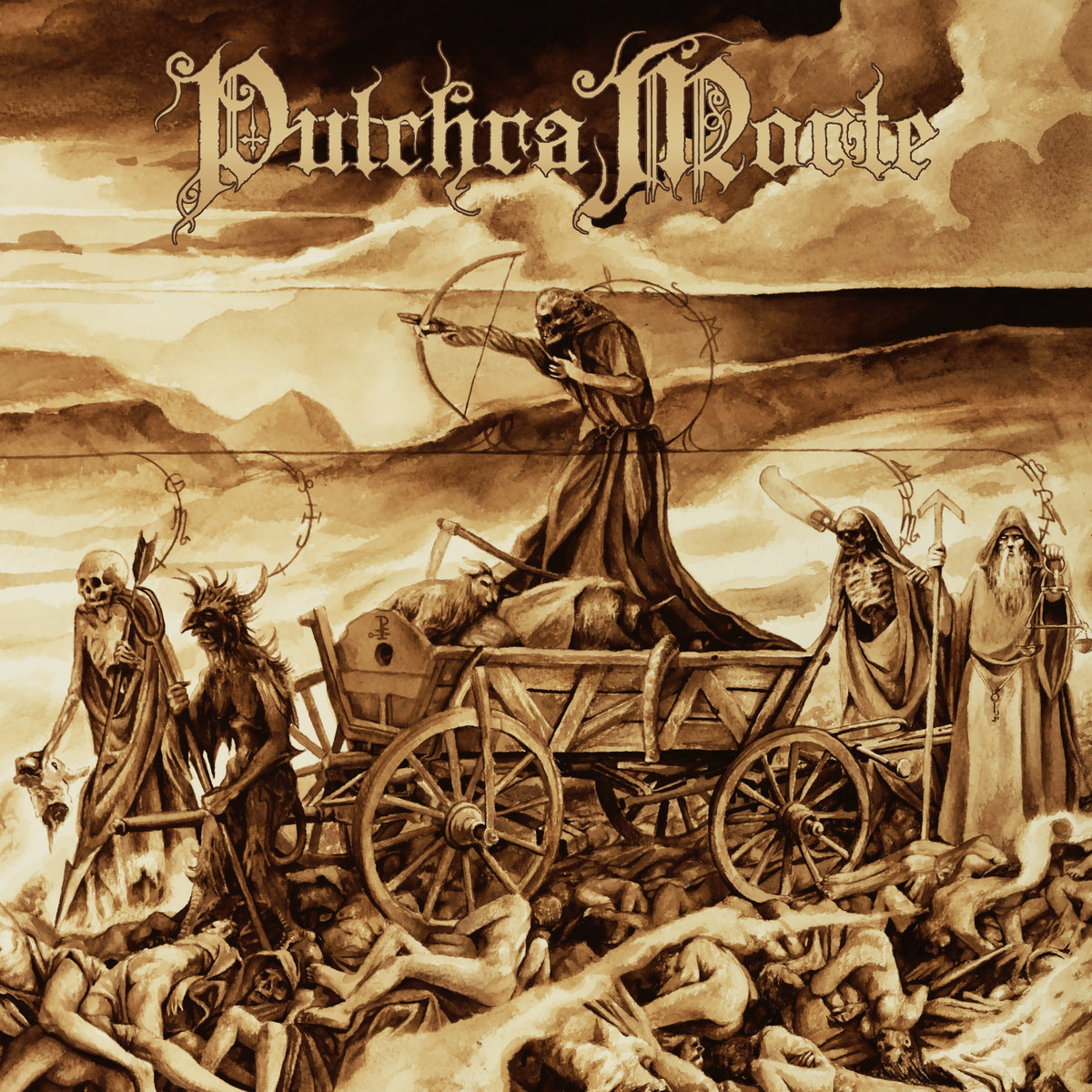 Pulchra Morte (ˈpul.kʰra / ˈmɔr.te) began with the idea to re-capture a feeling that has become increasingly scarce in the dense landscape of extreme music today, formation of songs containing weight, atmosphere and feeling. Started by Clayton Gore and Jason Barron (formerly of St. Louis staple Harkonin) with Jeffrey Breden in 2017, the trio began writing songs with the intention of recapturing the purpose of greats from the late-‘8os through early-‘9os doom-laden death metal scene, a point where feeling superseded technicality. During this process, Clayton reached out to a long-time friend and co-creator, producer/engineer Jarrett Pritchard (1349, Goatwhore, Wolvhammer, Gruesome, Exhumed, etc.), the two of them enjoying a 30-year friendship and collaboration from the days of the seminal death metal band Eulogy (Tampa, FL). Joining forces, the band completed the recording of their debut album at Pritchard’s New Constellation Studios in Orlando, Florida, with Pritchard taking on bass and auxiliary guitar duties as well as producing and engineering the album. It also features the vocal talents of Heather Dykstra, who was another Eulogy co-conspira­tor (her backing vocals featured on the band’s now legendary The Essence EP), as well as cellist Naarah Strokosch.

The album includes backing vocals by Tor Stavenes, better known as Seidemann of 1349 and Svart Lotus. Upon completion of the album, the band immediately released a lyric video for a rough mix of the song “Soulstench” while the rest was being mixed by Pritchard between tours. Full rehearsals took place in Chicago over the summer of 2018, with Dylan Kilgore of Withered being recruited to play bass while Pritchard moved to full-time guitar. Band intact, the rehearsals yielded excellent results, and from these sessions a proper video for the first single “Soulstench” was produced. In its wake, while dealing with the business of releasing the full-length, it was decided that a limited edition 7″ would be issued of “Soulstench” with a beautiful tribute to the mighty Paradise Lost, covering the classic song ”The Painless” from the band’s Gothic LP, as an exclusive B-side. The band wrapped up a deal for the full-length’s release in early 2019 and is booking select dates while already hard at work on the follow-up album.

The idea remains the same – feeling, atmosphere, songwriting, and weight with unabashed creativity above all else. We are in an excellent spot. We have the ability to create and record as often as we like, and will do exactly that. The debut album, entitled ‘Divina Autem Et Aniles’, carries the listener back to an era where heaviness and darkness were king. “The thing is, the world is a dark place,” says Pritchard. “There is no shortage of such topics to reflect on all around us. The media strobe light that is moving blindingly fast to sculpt every decision in daily life – there is darkness even when it wears a happy face. There is a constant journey through the darkness, but there is a choice to take the universe into your own hands and to dictate your own place and existence. A lot of that philosophy has to do with determining what is without looking for validation. I think that is the key to life and plays a part in all of this. Don’t get me wrong – of course I want people to enjoy the music and to come to see us, but this whole thing is satisfying to us first. Having played for as long as we all have, collectively – we are creating music we want to listen to.”

HMA: Can you tell us about the musical backgrounds and how you got involved in a band?

Jarrett Pritchard: I think all of our musical backgrounds vary. Primarily obviously we are all into death and black metal and have been for a long time. I personally have more of a punk rock background than the rest of the guys. Jason and Clayton and Jeffrey had started the band and asked me to do some bass on the demos at which time I decided that I like the music enough to get involved permanently and record and produce our albums.

Clayton Gore: I’ve always loved music. As a child, I took piano lessons for several years and enjoyed playing that. But as I got older, I was drawn to harder rock music, which didn’t feature a piano or keyboards. From there it went to metal, and around the age of 11 or 12, I wanted to be in a band. I originally wanted to play guitar. My cousin, who was in a band already, told me that there are already too many guitarists but not enough good drummers or bass players. I didn’t know anything about the bass, so I picked drums. I spent the next couple years taking lessons and practicing, then got into school concert band, marching band, and orchestra. I did have various friends I played with, who played guitar or bass, over those years. Eventually I had my first real band. I was 16 I think. It was more of a punk/hardcore/grind band called Dain Bramage. Had no clue at that time about the Dave Grohl band with the same name halfway across the country, around the same time. We had a few gigs, played with AOD one time. Were supposed to play with Life Sentence, but they got stranded in a snow storm and had to cancel. After high school, I moved to Florida. Within an hour of being in Tampa, I met David Vincent, and my path was before me. I met Jarrett and the other Eulogy guys around a year later.

HMA: Tell us about the journey?

JP: I produce and engineer records as my primary job (I’ve done albums for 1349, Goatwhore, Gruesome, Exhumed, Brutality, Wolvhammer, Nocturnus, etc.) so the production was the natural result of my involvement. I got the pre-production demos in February and had the bass written and ready for the guys to come in about a month later. We recorded the basic tracks in a pretty short amount of time at my studio in Orlando. For about the next 6 months I did overdubs and had other musicians in to guest on the record and mixed it in between tours. We were talking to some labels and due to lack of communication or just complete bullshit offers we decided to release it ourselves in a partnership with Scott Reigel’s Ceremonial Records. While we were getting it all worked out, we pressed and released the 7” single with “Soulstench” and a cover of Paradise Lost’s “The Painless”.

HMA: How did you get into metal?

JP: You know when I was first getting into metal there were so many categories. I honestly think it’s kind of limiting and stupid to need to categorize everything. Think about how vast the differences in rock music were in the ’70’s, but no one was calling Led Zeppelin “hobbit rock”. In reference to Pulchra Morte and why we play this style — simple. Fast and technical has been done to death. We didn’t feel that the slower, melodic, heavy, darker version of death metal had been fully explored – largely I think because some of those bands went looking for commercial success. So with the goal to simply play what we wanted to hear in mind, we picked up where some of those influences left off.

CG: Yeah, I really don’t like all the “sub-genres”. When I file and tag records, “Metal” is metal. Period. Lots of different things make up that idea, not just speed or vocal style, etc. Metal is an idea, an intention. I also think some people don’t really understand what some things are, and that you can’t just throw an adjective in front of something without understanding the root. Describing what a particular band sounds like to someone doesn’t make that description a new genre. Labeling what we do in Pulchra Morte is for someone else to say.

HMA: How do you describe your music?

JP: If my life was in danger I would probably be too busy trying to kill whatever was trying to kill me to tell you about our band. However… Dark, heavy, melodic journeys. “In the presence of Death everything slows to a crawl”.

CG: Anti-trend, unconstrained, focused in intent are also ways I would describe what we do.