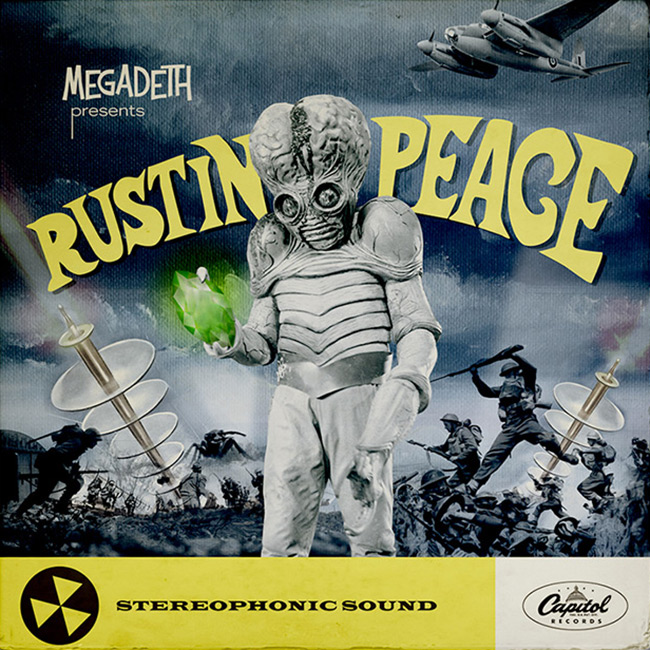 Rafa Melandi is a Creative Director of an Advertising Agency in the city of Sao Paulo – Brazil. He is a former art director and graphic designer.

HMA: What possessed you to defame these works of art? Just kidding, how did you get the idea?

Rafa Melandi: I love metal music and the metal aesthetics, but once I wondered what if Metallica or Slayer were bands from another period in time? Could their art covers have the same impact that they had on me in the 80’s? Would their legendary art covers be so powerful in early aesthetics? That was the inspiration. And I think that the tenacity, strength and minimalism of the Jazz-era from the late 50’s and early 60’s was a perfect style to redesign this time machine experiment. A new and an alternative perspective.

HMA: What makes a great metal cover art in contrast to something like Jazz apart from the obvious?

Rafa Melandi: Metal art cover is a manifest not an art decoration. Metal art has more than just the intention of being scary and make parents dislike it. It’s an inspirational message of power and the art takes you into a new world, a secret place that you can escape from monotonous reality and the common sense. It makes you feel part of a secret entourage and it’s a language that only metal heads can understand.

HMA: I believe you received very good response despite the devotion and admiration for the bands and artwork. Was it an astute marketing plan to raise some creative hell?

Rafa Melandi: Graphic design is not only about selling things and commercial interest, it’s a way of communicate and express oneself, like music, like art and poetry. Design makes people reflect about the world we see, and show things through new perspectives. As a designer, this project was the best way for me to make a tribute to the metal genre. It’s a personal project and a fan tribute. And all this records were selected not only because they were classics, but because they meant a lot to me. The whole premise was to respect the original art covers concept and objective, I just took them into a time machine, and most of the people got it and enjoyed.

Rafa Melandi: There were a few haters, people who didn’t see this project as an homage and just as a design experiment, they consider this a violation of something sacred (a behavior very common to radicals and people who are not open minded) and there were some people who despite jazz and don’t give a f* about design and illustration. But it’s democratic, when you put something on the web, you have to accept that it’s an ambience of divergence.

HMA: To me they all do the part, I have always been attracted to ‘Slayer – Rain in Blood’. The one you have made somehow reminds me of the hippie/satanic covens often associated with Anton LaVey celebrity covens. Are there any cross reference to films, music or even book covers from far gone decades?

Rafa Melandi: Most definitely. Reid Miles was a huge influence to this project, he was the master of the jazz aesthetics. But also all the jazzy mid-century techniques style, from Saul Bass movie posters and animations (especially Anatomy of A Murder from 59), S. Neil Fujita illustrations for book covers (The Rain In Blood redesign was inspired by his work), all the B Sci-Fi movie posters, the Bossa Nova Art, Antonioni and all the italian neorealism immaginario.

HMA: Was the set made to promote something specific?