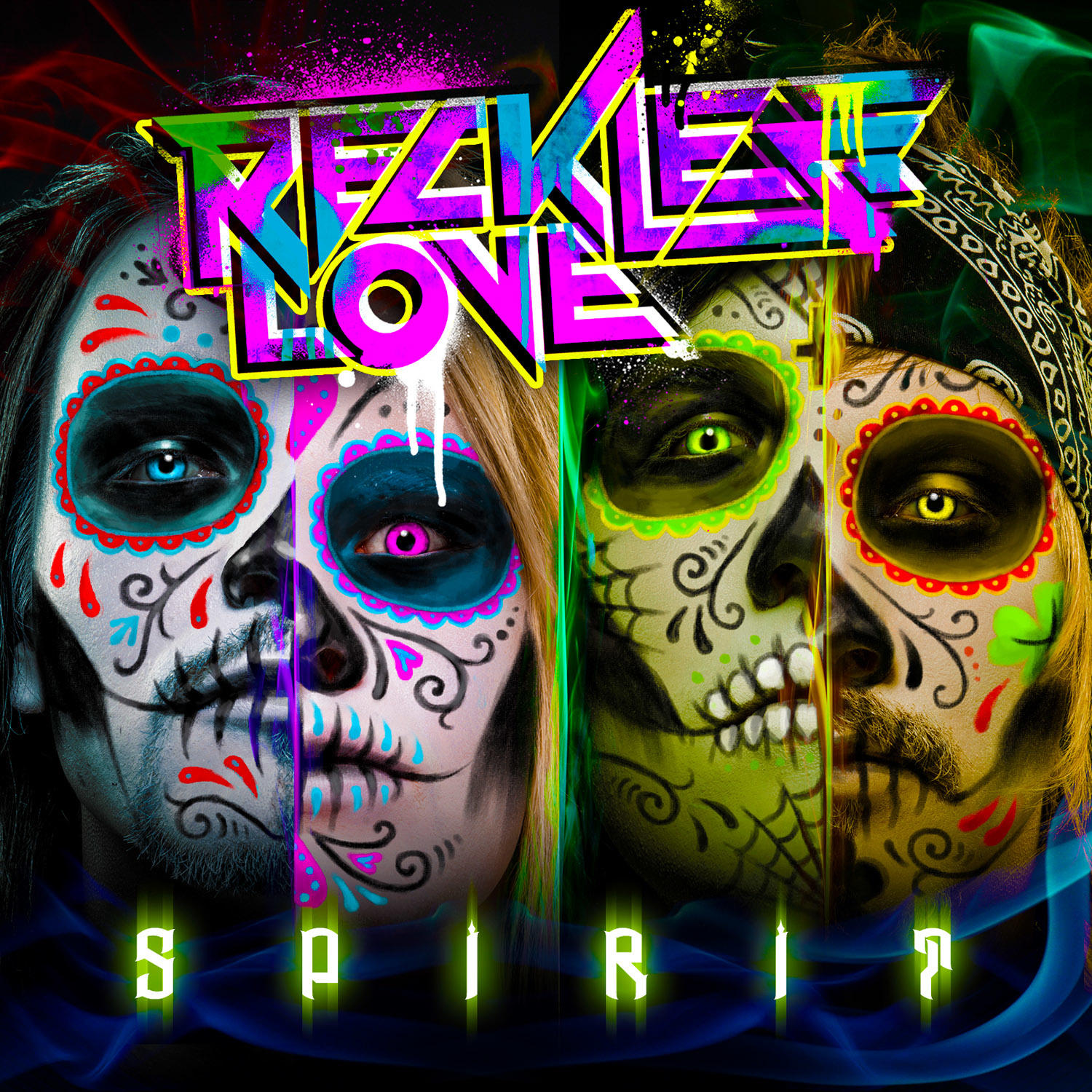 What’s up all you bizarre decadents and lovers of high-energy rock’n’roll? If you’re into hair metal then you probably know Reckless Love by now. They are one of Finland’s many fine contributions to rock music. Their first two albums Reckless Love (2010) and Animal Attraction (2011) were successes that (true to hair metal tradition) stirred the pot amongst glam enthusiasts worldwide. They recently released their 3rd studio album: Spirit. Those who have seen them play know they are flashy, spirited and command the adoration of a large fan base.

I will be the first to admit that when Olli left Crashdïet in 2008 after recording The Unattractive Revolution with them, I was unsure about Reckless Love. It has however since become apparent to me that Reckless Love is where Olli was always meant to be. The latest trend in lyrical content and band image amongst formerly colorful glam/sleaze bands seems to be to go dark a la modernist death rock. Reckless Love have definitely stuck out as minstrels of ‘merry metal’ and have made their colorful image and positivism a trademark of the band.

I spoke to Olli (vocals), Pepe (guitar) and Jalle (bass) on the day of their London show. Hessu Maxx (drums) was doing sound check and couldn’t join us but sent his regards to all of Heavy Music Artwork’s readers.

Andy (HMA): So Reckless Love in the UK yet again. How’s the tour been treating you so far?

Olli: Awesomely. If that’s a word even. I think it is. We’ve been touring pretty much the same places as we did a year ago and reception has been awesome. Every venue has been pretty much full.
Pepe: Yeah except for tonight, we’re playing here, O2 Islington….
Olli: Yeah, it’s not like sold out but anyway….
Pepe: Almost sold out.
Olli: Yeah, almost.

Andy (HMA): In my experience bands usually have one city in the UK which they absolutely love. For you what city would that be?

Olli: There are two cities that we really enjoy. Well we enjoy every city but Nottingham seems to be a hot spot for Reckless Love for some reason. We played at Nottingham Rock City for what? The fourth time was it?
Jalle: Fourth, yeah.
Olli: Yeah they actually paid a tribute to us. They took a picture from the show and they hung it up on the backstage wall. Of course London has a special meaning for us because last year we did several shows at the Barfly Camden, and of course London is London. [Laugher]

Andy (HMA): Anything particularly fun or ridiculous happen yet?

Olli: It’s all pretty much been one big comedy piece. I don’t know where to start.

Andy (HMA): So ‘Animal Attraction’ and now ‘Spirit’. Congratulations. How do the two albums compare to one another?

Jalle: Thank you.
Olli: Thanks. If ‘Animal Attraction’ was a step towards pop music from what we did on the first album I think this is a step back from pop music towards hair metal or whatever. The pop is still there pretty much but not very strongly. This time around we just set out to do a hair metal record with an exclamation mark and that’s what it is. It’s the spirit of Reckless Love.

Andy (HMA): So why ‘Spirit’? What’s the significance behind the name?

Olli: Well for me at least – I mean everyone can find the meaning behind the word for themselves – but for me it’s the spirit and fire of Reckless Love because that’s how we started. We started out as a hair metal band and then we looked up to our idols: bands like KISS, Def Lepard, Van Halen…. That’s just like the common ground for everybody in the band. That’s the whole essence of Reckless Love, that’s the spirit, it’s what we always go back to even though we listen to different types of music, or we do songs that are influenced by pop music. We’re still a hair metal band.

Andy (HMA): Was it a challenging labor composing and recording it?

Olli: Uh it’s always a challenge, I mean it’s not like it’s difficult. It’s a process that we enjoy doing but of course it’s a shitload of work.
Pepe: This time we took time off touring to record the album. That made it easier than ‘Animal Attraction’ which we recorded during the tour. So this album was easier to record definitely.
Olli: Yeah during ‘Animal Attraction’ I think we had fifty shows in Finland and we ended up being on the road during the weekends, and during the weekdays we were in the studio.

Andy (HMA): Tell me about the album cover? Visually very different from your other albums – how did it come to be?

Olli: A little over a year ago I had this obsession…. [Laughter] An idea that became an obsession – I just wanted to incorporate a skull into our imagery because pretty much every hair metal band has always used a skull in some form. It’s like a heavy metal couch, everybody’s got one. At the same time we’re a merry metal band so the typical skull wouldn’t suit us, y’know? It would be too dark and so we started brainstorming how to make a merry metal skull. So obviously we wanted it to have colors so that led us to Mexican sugar skulls, so that’s how the whole idea started. We started developing that way and when we introduced it to the artist who did the record cover and the director who did the video ‘Night On Fire’ they gave their own input and that’s how we ended up with the record cover and the videos.

Andy (HMA): You kind of actually answered my next question which was about how much you were influenced by the Mexican Day of the Dead?

Olli: Yeah, I mean not exactly. I don’t see the album cover like that but I think the whole idea of celebrating the dead and celebrating the life they had, I think that suits the idea of Reckless Love very well. At the same time pretty much every song, the lyrics mention death and it’s all just twisted around. It’s not about death, it’s about life. I mean, not like dying to live…. Just personally, I mean, I’m petrified, I’m afraid to die. [Laughter] I want to live.

Andy (HMA): I really like ‘So Happy I Could Die’. It’s also my favorite music video of yours. Is that what the song is about – life despite the reality of death?

Olli: Yeah it’s just the heat of the moment and being in it.

Andy (HMA): You guys have mostly songs about happy things: love, sex, partying and taking it easy. Is that how you see life?

Olli: Well that’s what inspires us at least. [Laughter] We’re not inspired by dark or gloomy things. I mean we get depressed just everyone else but that kind of stuff just doesn’t inspire us. It’s not the thing that we cherish. We like to party. [Laughter] We like to have a good time.

Andy (HMA): Tell me about lyrical content. What inspires you? Any books, movies or current events?

Olli: Pretty much everything. I see my life through some kind of weird merry metal goggles. [Laughter] I do see the positive side and I focus on that. Although there are negative sides of life you have to overcome. In the end we want to stick with the positive side of things.

Andy (HMA): Do you have a favorite instrument when recording and playing?

Pepe: For my part it’s basically the same live as it is in the studio. The same Marshall with a Superstrat guitar, that works live and in the studio. Don’t know about Jalle….
Jalle: Same for me. [Laughter] I have one favorite instrument. That’s the bass!
Olli: We’re pretty much simple types of human beings. Simple guys with simple tastes so…. [Laughter]

Andy (HMA): What do you think about the new generation of glam / sleaze bands popping up across Europe and the States? Anyone you like?

Olli: [Laughter] Us…. Ourselves. [Laughter] Yeah but I mean there’s plenty of potential in the whole genre but I think the world hasn’t seen the best of hair metal yet. It’s still to come. Any band can do it and it all comes down to songs and how good the song is because basically right now hair metal is still missing the mainstream hits.

Andy (HMA): Olli, as a married guy how much trouble are you allowed to get into?

Andy (HMA): You’re very energetic on stage, very flexible. Have you ever done any sports or is it just the gym?

Olli: I did some boxing when I was in my teens but I mean, that doesn’t really add to your flexibility. [Laughter] Usually nowadays I exercise when I can. Right now we’ve been on tour for ten days and I haven’t seen a gym in ten days.

Andy (HMA): What’s next for you guys?

Olli: Well plenty of touring. I mean we’re flying to Finland to finish the tour just before December starts. Next spring…. Well we don’t know ourselves because it’s all over the place. There are plenty of plans. We just put our record out in Japan; it’s coming out in German-speaking countries, so hopefully we’ll be doing some more touring. The next record is like a ghost in the back of our heads already. We’re brainstorming about it but we don’t have any finished songs yet, just ideas of it. Hopefully we’ll get to go to Download and do plenty of festival shows in Finland. Next fall…. Way too far away! I don’t even know what I’m doing next week. [Laughter]

Andy (HMA): Last one, what do you love most about music?

Olli: [Laughter] That’s a question I don’t think I can answer simply. I think it would take a lifetime to answer that question.

Andy (HMA): Thank you very much for talking to Heavy Music Artwork. Kiitos!