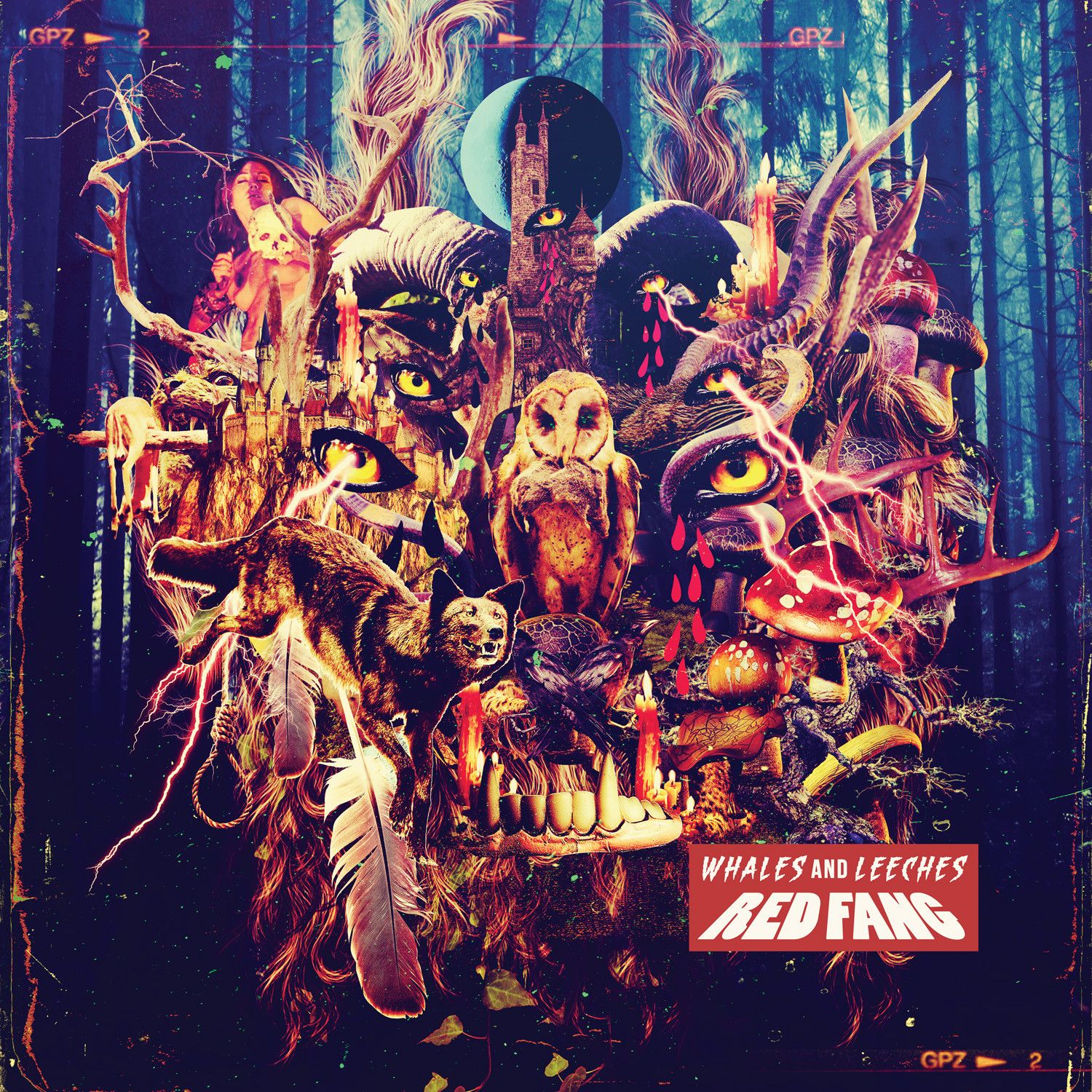 In conversation with David and Aaron of Red Fang

“The record sounds very excellent and professional, you can tell that they’ve been practising their instruments. Their songs sound more thought-out and trippier. Bryan and Aaron sound like they’ve gotten better at singing. Every song has a riff you like. Mike Scheidt from YOB sings on a song, so you’re gonna like that. It sounds more mature, like good cheese or your Aunt Sharon. Do you want me to keep rubbing your ear crotch? Sorry, I’m kind of a tease! You’re just going to have to take a few minutes to listen and let Red Fang’s filthy hands take the wheel, then come up with your own adjectives and opinions. I think it’s a great record and they’re going to make folks proud. I hope they don’t get all famous and stuck up and then the VH1 special and, oh Christ.”

Aaron: Hi, this is David and Aaron from Red Fang and we are at the Electric Ballroom in London, England.

David: Yeah! He just dropped us off with all our gear and then gave a push to do a sound check. And now they’ve trapped us in the green room and I think we are supposed to do some music later.

Aaron: Yeah. We are here to play our third headlining show, in London, and each show we do gets a little bit bigger and it’s kind of crazy and pretty exciting.

Aaron: Yes it’s amazing! Every show we’ve played here has been better than the last.

Aaron: Yeah, I won’t say that I’m lying in bed awake at home thinking about; I need to get back to London. Every time we go on a tour in Europe like London it’s definitely a highlight.

HMA: Tell me about yourselves, where are you from?

David: All the members of the band, we live in Portland, Oregon, now but none of us actually grew up there. I was born in California, basically San Francisco, Daily City, which is right outside of San Francisco, but I grew up on the East Coast in North Carolina. I moved out to Portland in 1996, so how many, you do the math on that, however many years that is, from Portland basically.

Aaron: David, John and I got together in Portland we were just kind of playing instrumental music in the basement and then we recruited Brian to move back from San Diego and he had a bunch of songs he had already written and that’s basically what happened.

David: It’s a little more complicated than that because me and John actually played music together back in North Carolina before either one of had moved to Portland years ago.

Aaron: There was also the band called Party Time, the band that David and John and Brian were in together. They had broken up. Brian moved to San Diego. My band had broken up. None of us had any projects going so John called me up and said do you want to jam? I don’t have anything else to do, and he’s an amazing drummer that I ever played with. Actually, that’s a lie I had played with him before. We called David and said we have to get you over here to play with us because this sounds weird with just two people. Let’s play with these other musicians, we respected each other and appreciated where we were all coming from musically and personality wise so it just made sense.

HMA: Right, where are you coming from, musically?

Aaron: I don’t know. I think that early on, the only common thing that we all really agreed on was Soundgarden.

Aaron: We all have a mutual appreciation for a bunch of stuff like Melvin’s.

Aaron: Jesus Lizard, Yob was one that we really bonded on really tightly in the beginning. I don’t know how you feel about Hot Snakes.

Aaron: I feel like Hot Snakes is another common theme for the band.

David: I think when people hear Red Fang they might not realize how varied our musical interest is. I like bluegrass, I like Bar Talk, I like all kinds of music. It seems like those are the core bands that really like all four of us really were kind of bonding over and we definitely all agreed upon early on and then we like tons of stuff, but that’s more informative to the type of music we actually play in a band. We all like Neil Young but there is not much of a Neil Young influence in what we are doing.

Aaron: I mean there is but it’s much more. It’s not as direct.

HMA: On your videos, there seems to be a lot of beer. Can you tell us more about that?

David: Sure, it’s our buddy, Whitey. He writes them and he directs them, and they are all his ideas. We might have tiny things to offer but the real answer is that he is the brains behind it, and it’s hard for us to really answer questions about the ideas or creativity.

HMA: Does he come in after you finish the album?

Aaron: Yeah, our songs are usually done. Although, maybe he has just some ideas floating around and then we’ll match it to a song.

David: That’s the impression I get you to see he has lots of ideas all the time.

Aaron: I think part of it is that he’s friends with us and he knows our sense of humour. He knows us as people and he sort of exaggerates on who we are to these larger than life… sort of fantastical things that happen in the video. They are based on us and our sense of humour, and one thing I really enjoy about it is most hard rock metal bands are all like macho and tough, and I like that we are serious about our music.

The musical side of it is serious and even sometimes pretty dark in tone or whatever, lyrically and musically, but I like that the videos have a sense of humour because we are not tough guys. We are not like that. We get out our sort of the darker side of things, the angst, in the music, and then we, I don’t know. I just like that you can have both. You can have humour and the seriousness in the music.

HMA: At least it tells you are human because obviously, every human has got to have that, right?

Aaron: It wouldn’t really seem real. That’s obvious characters too but there are extensions, as Dave was saying, of who we actually are, whereas a lot of those, everything is really like that all the time just seems kind of like really? That’s why it’s one of the things we appreciate about ghosts is that this is completely fake. They don’t even pretend that they believe it.

David: Or do they? [laugh out loud]

HMA: How did you feel when you get up on stage? What is the feeling like?

Aaron: It depends on what I had to eat that day or how much exercise and how much sleep I got. That’s the facetious answer but it really does depend on my mood for that day and what the club is like and if we got treated well or poorly. Generally, I don’t get nervous anymore. There are shows like today; you can kind of feel the pressure.

It’s a bigger show or like really big festivals can be a little bit daunting but we have been doing this thing, generally, the same show where we have been playing together for eight years now. We are really comfortable with each other. I played with other bands a few times in the last couple of months and it’s just like one song I get terrified, and I’m super nervous and I am totally shaking and I can’t play the guitar right anymore, but it’s like we’re pretty comfortable together now.

David: Well one thing, I do agree that like the things that have happened in the day and just what you ate and all those things, but also once I start playing all that kind of goes away. I probably should focus more on projecting myself to the people listening, but I am really listening to these guys. I’m listening to everyone else in the band and myself and focusing on playing the music. In a way all those things are definitely factors but once we actually start that goes away and I’m just playing the music.

HMA: Do you make music so you can go out and play?

Aaron: That’s part of the point. We are playing in a band that we make a point of booking shows before we had a booking agent or anything. It’s part of the joy is playing for people and having them receive it and respond to it, but it is also something that we have to do because it’s a way of expressing whatever we can’t express verbally. It’s just something that has to happen.

HMA: If you could tell us any information in regards to your artwork because it’s really amazing.

HMA:  Does it come up together with music afterwards or beforehand?

David: The last two, our newest, “Whales and Leeches” and “Murder the Mountains”, both of those were done by Orion Landau, and the music was done and he took inspiration from the recordings. Although he had some ideas and he is another person like our video director friend who knows us and knows what we like. We talked with him and I was realizing how kind of similar both the last two are just piles of stuff. It’s just tons of things going on, animals and well the first one is even more…

Aaron: Yeah, he painted that first one actually, I’m pretty sure. The same as the “Lord Dying” album cover. He approached us and said he wanted to do more of a photo collage thing and the original idea was like motorcycles in the desert. We were like that’s not really… like biker culture or biker chick sort of didn’t really work for us. Orion Landau, he’s the in-house guy at Relapse. He’s amazing. He just brings it to us and we just say that’s awesome.

David: When he showed us some stuff and initially he had an idea for it to be a 3D pop-up style. He would unfold the gatefold and it would actually be a pop-up book style and then at some point he was like that’s going to be too complicated or too expensive. Then he was like well I’m going to do this with 3D lenticular print and we were like Yes! That is awesome! I love how it turned out. It really stoked that Relapse was willing to invest in doing that style cover because I think it is really cool.

HMA: Is he going to do your next one as well?

Aaron: I don’t see why not.

David: We don’t know but yeah probably. We love his work so yeah.