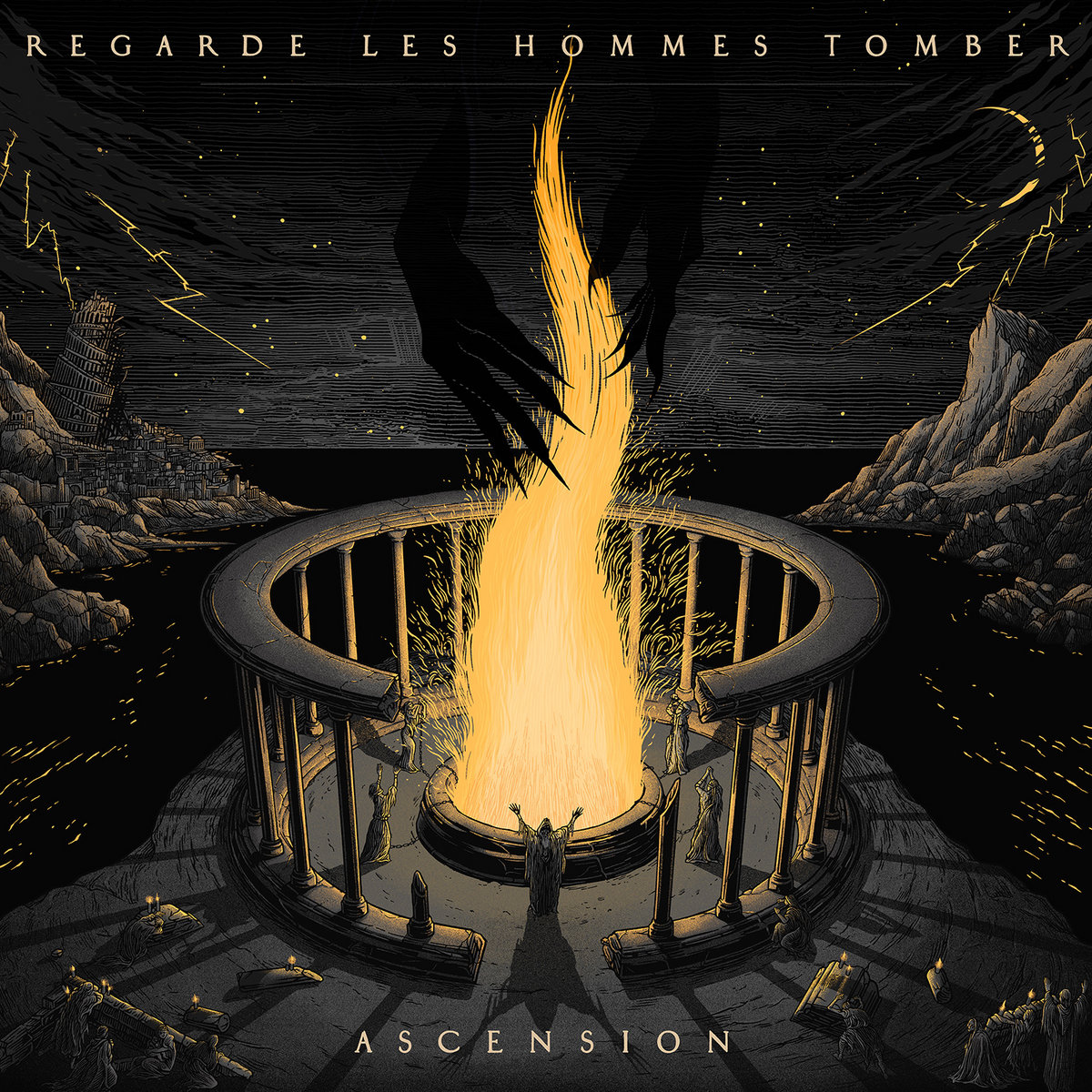 French filmmaker Jacques Audiard got the idea for us years ago, but we couldn’t really speak of a direct link with the film he made. The name has not been chosen, but regarding the deep sense that this sentence contains. You can translate ‘Regarde Les Hommes Tomber’ by “Watch the men falling, “ which is the band’s general concept. Empirical observation of humanity’s condition, a study of his decline and his inner fights through the religious prism.

This title ‘’Ascension is directly linked to the concept of this album. But watching artwork, reading the texts and listening to the music will make it much more clearly than a long speech. We get our guiding principle in the music we play, but there is a lot of evolution between our first album and ‘Ascension’ regarding the past. Many bands tend to soothe their aims and compose cooler music, we did the exact opposite, putting more and more epicness and violence in our songs. You could find a lot of doom sludge part in our first album… Whereas ‘Ascension’ can be described as a very brutal record. Anyway, we couldn’t release the same album.

Regarde Les Hommes Tomber is composed of friends with different tastes, which is, I think, a true force. Some of us come from pure black metal, others are great fans of doom, even gothic rock. We don’t consider that a musician shall listen to only one genre, that’s why our music is a mixture of various influences. We trust the power of this diversity to build our sound. We don’t have “direct” influences, but listening can sometimes evoke bands like Drudkh, Amenra, Sargeist, Mgla, Dead Congregation, Forteresse, etc. Bands who are different. We build our music without thinking of a model; we just look for the best way to deal with our concepts.When we compose, we don’t want to be limited by boundaries that could stop us; we just want to make something intense and spontaneous.

All of our lyrics are linked to biblical mythology. Henoch, a friend of us, write all our lyrics. The two first albums focused on the main point: The fall of the men, who are rejected and tortured by God despite their devotion and love for the divine. They pictured both this fall and the birth of a consciousness that leads men to reject the Lord and all the adoration principles during the exile. To become their gods finally and “sit on this throne”, as the last song of “Exile” says. “Ascension” ends the trilogy, but on an extraordinary way: the lyrics of the two first album were extremely close to “classical theology”. It’s a bit different for ‘Ascension’ this is an original creation, a new tale, a new myth. The prism of biblical stories is so huge that everything can be imagined; this is so great. Henoch did it on his way, writing a passionate, a deeply philosophical tale, helped by ancient myths. But I don’t want to spoil anything! Anyway, lyrics are essential for us, and there is no ideological message in our music, we only creatively deal with these themes. Those symbols are intense and sum up the concepts we want to show in our music, that’s why we use them. We’re atheists who tell stories, not proselytes. None of us is religious, but we’re all fascinated by the three monotheist religions. This is a neverending source of inspiration for us, just because myths don’t describe some lost and ancient times, but the world we live in now. That’s why they are so enthralling. These ancestral stories must be red like it; the analogy gives them all their strength. They have been written in the past to describe the reality of today and predict the future.

About the dark arts? Maybe a kind of art that needs time to be settled. Our music has been build step by step, year after year, album after album. We trust the time to generate creativity, simply because art can not be ordered. Unfortunately, we are not a band who can write on the road. We would love to, but we can’t: we play atmospheric music, so we need a real working context to compose—an entire rehearsal room, not a backstage sofa. We don’t get muses; we just need calm to write songs, feel in harmony with ourselves, and feel introspection, like monks in their monastery. That’s why it takes so many time; we cannot do both things at once. Concerning the writing method itself, it wasn’t easy for this new album: To get the ability to create new music without repeating outlines is every artist’s challenge. We had to exit the comfort zone to write Ascension. Finally, that was a thrilling experience, and we are very proud of the result. We put our guts on this record.