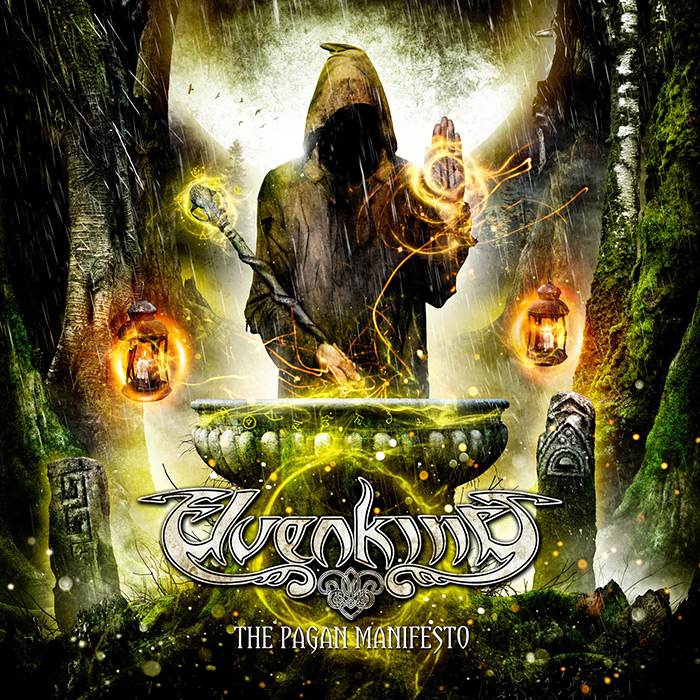 Elvenking are an Italian folk/power metal on the AFM Records label. ‘The Pagan Manifesto’ is their eighth full length album. Artwork and design for the album comes courtesy of Rhett Podersoo of Machine Room Design. “This album is not just a collection of songs, it’s a piece of life – our fan’s and ours. It unites music, lyrics and spirit. It is our manifesto, and I never felt like this about one of our albums before” – Damna

Rhett was approached by the band to create the artwork for ‘The Pagan Manifesto ‘ – a thematic album about Paganism and everything central to the bands beliefs.

The band request was for cover artwork that celebrated folklore and Paganism in all its glory – druids, runes, nature, magic rituals, standing stones etc, with the booklet to be designed to resemble an ancient magical manuscript. The artwork was to include two symbols close to the band’s heart – ‘The Rune’, as found tattooed onto the druids raised hand on the cover artwork and the ‘Tree icon’ which is found upon a page of the booklet manuscript.

Rhett – “Upon hearing their music and talking to the band members, you are instantly aware of how passionate they are about their sound and everything it and they represent”. It can sometimes be a daunting task for an artist to capture all these sounds and emotions and produce an image or images that will do them justice. Rhett – “Elvenking’s songs on this album are very thematic…full of rich lyrical imagery embracing subjects such as folklore, witchcraft, magic rituals, nature and dark fairy tales. With such a wealth of lyrical inspiration it was a pleasure to work up the visual artwork. The Pagan Druid – Sorcerer  is a figure that we felt defined the album. Central to Druidic belief is a love of nature. So it was from those two fundation ideas that the cover artwork developed”.

Rhett’s artwork is based upon his photography. Working from his home studio in London, he creates highly detailed composite digital images built up from sometimes a hundred or more separate photographic elements. Components for the artwork are often custom shot for each project as needed. On top of this he has amassed a large library of personal stock photography and props from which to work. Out of camera, the bulk of this creative process is carried out using image editing software such as Adobe Photoshop. The results, like ‘The Pagan Manifesto’ cover artwork are visionary – complex, atmospheric pieces that capture the spirit of the music.

For the Elvenking cover project, the focal figure of the Druid was photographed in the studio in various poses. A few of these images were then combined together for the final figure. The cloak was then digitally altered to appear more aged and textured giving it the required earthy appearance. The other props like the staff – made from a found animal skull and a twisted hazel wand (bought in an actual witchcraft shop) and the floating lanterns were also shot in the studio. The rest of the image was constructed from various elements Rhett had previously photographed. The Runic symbols and ‘magical flares’ had been requested earlier on in the artworks development by the band – so these were introduced in the final stages – along with the rain, mist and other atmospheric details to complete the cover artwork.

The album booklet was designed to resemble the worn pages of an arcane manuscript, emblazoned with Runes and mystical symbolism – its organic feel perfectly complements the cover artwork. Portraits of the band members were provided, which Rhett edited and incorporated seamlessly into the booklet alongside the lyrics.

The back inlay artwork concludes the ritual started on the front cover – the band’s logo rising from the Druid’s cauldron.

Rhett -“This was a really enjoyable project to work on. I had a very good working relationship with the band. I was given a considerable amount of creative freedom and trust by the band – they were kept involved along the way –  overall they had a relaxed and open minded approach to the artworks development.  A great bunch of guys to work with – I wish them all the best for the future”.

The final formats for ‘The Pagan Manifesto’ consisted of a standard Jewel case followed by a Digipack release  embellished  with a varnish overlay of the bands Runic symbol.