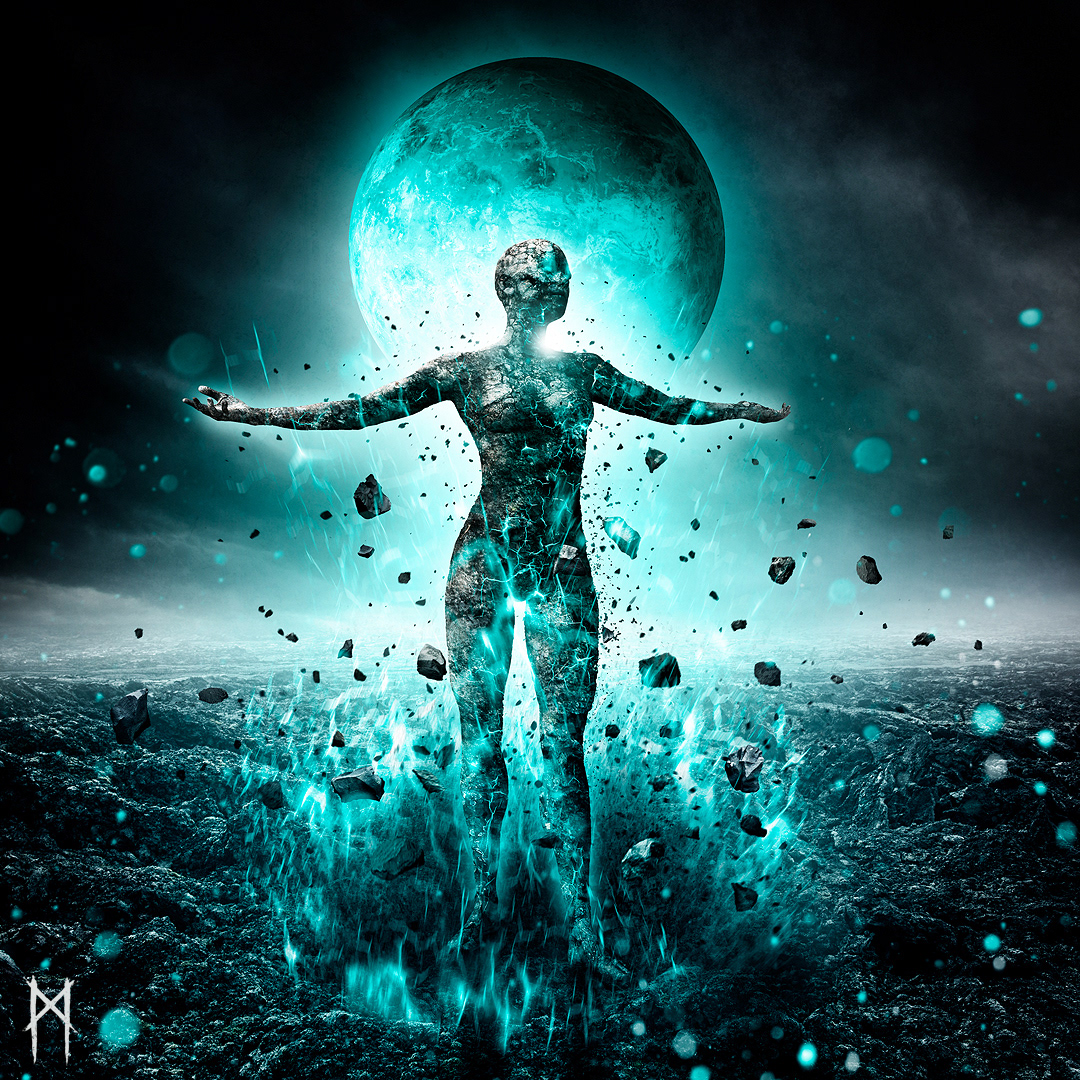 My father is a keen photographer and I used to help him out in our home darkroom. I loved the hands-on creative process of working with film equipment. The whole thing was like some sort of alchemy. After finishing school I went on to get a Diploma in Photography. It was a highly recognised 3-year course but it attempted to mould the students into commercial photographers. I wasn’t into that. I was more into shooting on expired film and transparency and experimenting with cross-processing in incorrect developing solutions. The results gave the edgier, gritty atmospheric look I was after. I was always heavily into post-production – manipulating the image to achieve the look that excited me. When I started working with photo-editing software such as Photoshop and high resolution digital photography, it enabled me to push the boundaries of this process further.

I think probably my first real break into metal band art was when Aaron Stainthorpe of My Dying Bride contacted me after he saw the artwork I had produced for another band and asked me if I was interested in working on the 2009 album, ‘For Lies I Sire’. Of course I jumped at the opportunity. It was a great experience working closely with a band I had listened to for so long. I learnt a lot, and made a few mistakes, but importantly it set me up with the knowledge of the album packaging process involved in a big project – from the artwork and design to creating the print ready files.

I am foremost a photographer so my artwork is based upon that. My aim is to create highly detailed composite images. A more complex cover image may be composed of a hundred or more separate photographic elements, many of which are custom shot for that particular project. Thus whether I am abroad on holiday or just walking around London, I am always taking photographs and have an ever growing library of images to work from. I have a particular fascination with architectural decay, junk and bleak landscapes. There is an often missed beauty in decay and ruin. I find such places as corroding factories, prisons, scrap yards or abandoned mental asylums and manor houses endlessly inspiring. I make an effort to seek out these places and photograph them before they are gone. So elements from these places appear in my work on a regular basis in some form or other.

I work from my home-based studio in London. Images are planned out and then composited and manipulated in Photoshop. It can sometimes be a lengthy process with a fair bit of trial and error to arrive at the final result. The beauty of creation is that the final image can often be far removed from the original idea. I also make use of the rest of the Adobe Suite – especially In-Design and to a lesser extent Illustrator – for logos and merchandise designs. I have a pretty decent camera kit and some studio equipment and have also built up a nice collection of props over the years.

It can be tough working as a creative person because when it comes to more commercial projects there are often tighter restraints idea-wise, so being able to work in the field of music artwork is great as it allows me much more creative freedom. Projects generally start with the band presenting a rough idea of what they would like. I am given the album title and  lyrics, and I listen to a few tracks and try to get a feel for the music. If I am unfamiliar with the band, I do a little more research. Once I feel I know what the client want, I get back to them with my ideas, and possibly a sketch or a quick mock-up and then we build from there. The amount of input from the band varies from project to project. Most bands are happy for me to expand on their general concept or work up my own ideas, while some have a firm idea of what they would like and I try not to stray from that. Either way I try to work as closely as possible with the band, keeping them updated along the way to ensure that the end result is something they are happy with.

I don’t think there is another music genre where the artwork produced is viewed with almost the same importance as the music, and the cover artwork can often be the first introduction someone has to the band. In my opinion, the metal section is visually the most exciting section to browse in a music store. Metal band artwork is also often looked to for inspiration by other creatives. I have had some interesting new work opportunities come about in recent years due to my involvement with the metal scene. It has resulted in me becoming more involved with book cover art and design, and working with established veterans such as Stephen King and exciting upcoming authors such as Daniel Polansky, for who’s cover I was recently nominated for best fantasy novel cover artwork at the Gemmell Awards.

My artwork definitely leans more towards the darker side of things. Futuristic ruin, space, death, and elements of war, are common themes in my artwork. I also find various religions and the occult fascinating, thus iconology and symbolic imagery is often referenced – sometimes at the bands request, but other times it just works its own way in. When working on book covers and projects outside of the metal scene, I am occasionally asked to produce work that isn’t as dark or bleak and I am comfortable with that. It is always fun to experiment and adapt your style to different situations. In terms of influences, in my student days I was really into the photography of Diane Arbus, Nick Knight, Annie Leibovitz, and early David Bailey, as well as war and documentary photographers such as Donald McCullin. As my style developed, artists like Dave McKean and Joel-Peter Witkin became more of an influence. I am also a big fan of old Daguerreotype photography and the sculpture of Joachim Luetke. At the moment I am really interested in machinery and I am watching a lot of Science Fiction type films like Tetsuo and Richard Stanley’s Hardware, and listening to bands like Sunn O))) for inspiration. These days I tend to find inspiration in the locations I shoot. Being out of the studio on a regular basis on photo shoots also allows me to keep creatively stimulated. That one amazing location, landscape or even a small found detail can spark new artwork ideas or help evolve current ones.

I get asked to create apocalyptic visions on a fairly regular basis, but while I really enjoy doing those I think the cover artwork that most sums up my style and the process by which my artwork is created, would be My Dying Bride’s ‘A Map of All Our Failures’. Most of the photography for this album’s artwork was shot in an abandoned mental asylum and I think being there and walking through the derelict rooms and corridors really helped me recreate the atmosphere needed in the artwork. For this cover I worked very closely with the lyrics of the title track. It’s about someone who is completely alone – the character has absolutely nothing at all left and is in utter silence, only just sensing their last dying breaths. It’s a very miserable image. I love it… especially the moths.

Thanks for your interest in my work and inviting me to be part of Heavy Music Artwork.