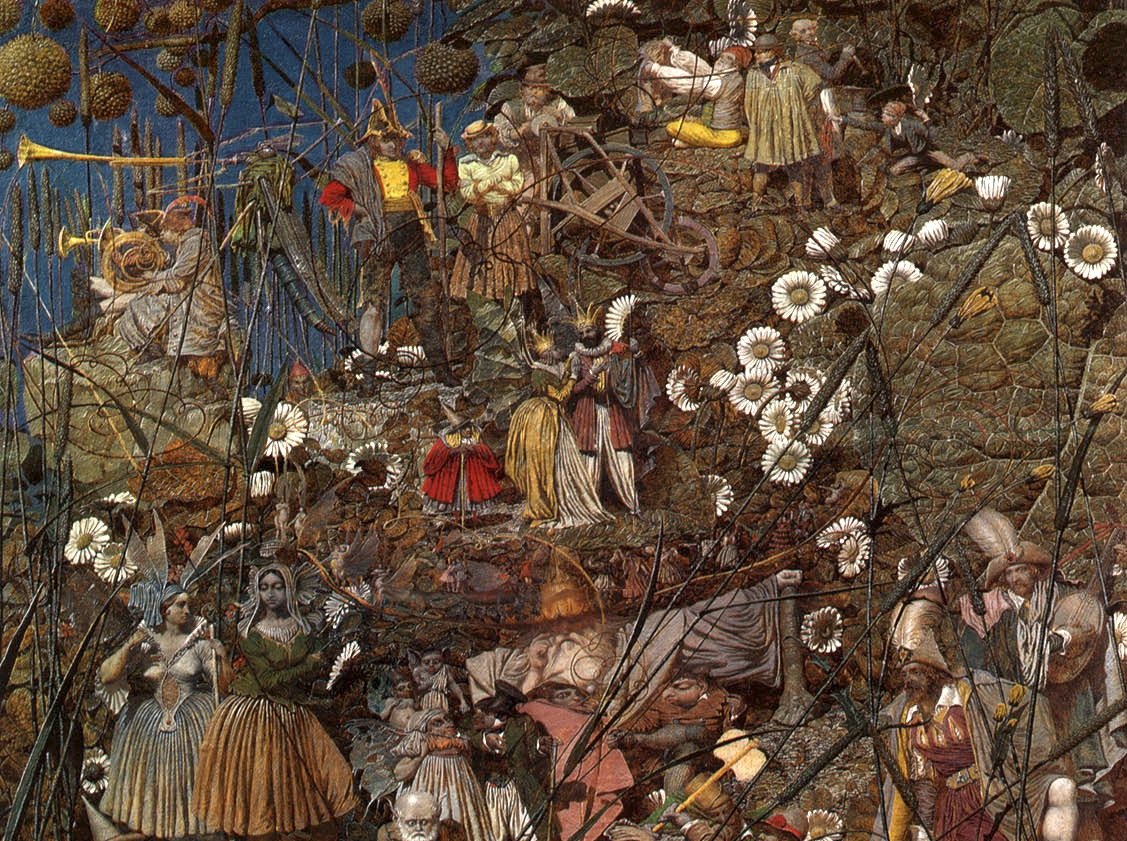 Dadd was born at Chatham, Kent, England, the son of a chemist. His aptitude for drawing was evident at an early age, leading to his admission to the Royal Academy of Arts at the age of 20. He was awarded the medal for life drawing in 1840. With William Powell Frith, Augustus Egg, Henry O’Neil and others, he founded The Clique, of which he was generally considered the leading talent. He was also trained at William Dadson’s Academy of Art. Among his best-known early works are the illustrations he produced for The Book of British Ballads (1842), and a frontispiece he designed for The Kentish Coronal (1840). In July 1842, Sir Thomas Phillips, the former mayor of Newport, chose Dadd to accompany him as his draftsman on an expedition through Europe to Greece, Turkey, Southern Syria and finally Egypt. In November of that year they spent a gruelling two weeks in Southern Syria, passing from Jerusalem to Jordan and returning across the Engaddi wilderness. Toward the end of December, while travelling up the Nile by boat, Dadd underwent a dramatic personality change, becoming delusional and increasingly violent, and believing himself to be under the influence of the Egyptian god Osiris. His condition was initially thought to be sunstroke.

On his return in the spring of 1843, he was diagnosed to be of unsound mind and was taken by his family to recuperate in the countryside village of Cobham, Kent. In August of that year, having become convinced that his father was the Devil in disguise, Dadd killed him with a knife and fled for France. En route to Paris Dadd attempted to kill another tourist with a razor, but was overpowered and was arrested by the police. Dadd confessed to the killing of his father and was returned to England, where he was committed to the criminal department of Bethlem psychiatric hospital (also known as Bedlam). Here and subsequently at the newly created Broadmoor Hospital, Dadd was cared for (and encouraged to continue painting) by the likes of Drs William Wood and Sir W. Charles Hood, in an enlightened manner. Dadd probably suffered from a form of paranoid schizophrenia. He appears to have been genetically predisposed to mental illness; two of his siblings were similarly afflicted, while a third had “a private attendant” for unknown reasons. In the hospital he was allowed to continue to paint and it was here that many of his masterpieces were created, including his most celebrated painting, The Fairy Feller’s Master-Stroke, which he worked on between 1855 and 1864. Also dating from the 1850s are the thirty-three watercolour drawings titled Sketches to Illustrate the Passions, which include Grief or Sorrow, Love, and Jealousy, as well as Agony-Raving Madness and Murder. Like most of his works these are executed on a small scale and feature protagonists whose eyes are fixed in a peculiar, unfocused stare. Dadd also produced many shipping scenes and landscapes during his incarceration, such as the ethereal 1861 watercolour Port Stragglin. These are executed with a miniaturist’s eye for detail which belie the fact that they are products of imagination and memory. After 20 years at Bethlem, Dadd was moved to the criminal lunatic asylum at Broadmoor, outside London. Here he remained, painting constantly and receiving infrequent visitors until 7 January 1886, when he died, “from an extensive disease of the lungs”.