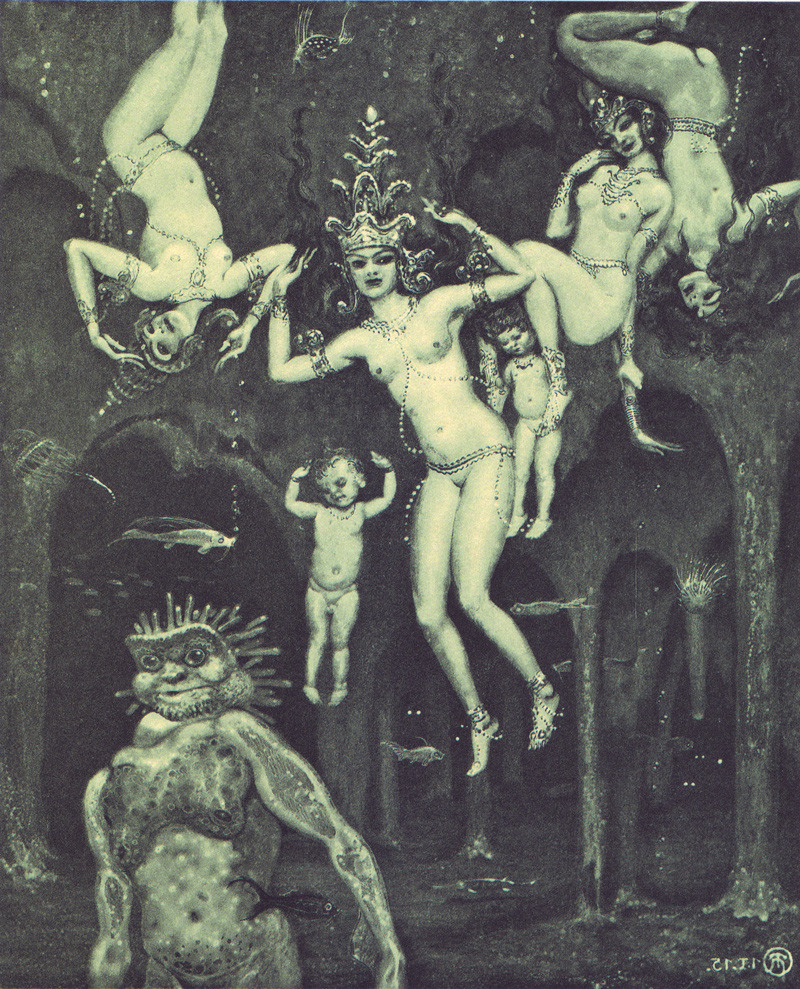 Richard Teschner (March 21 or 22 March 1879 in Karlsbad , Austria-Hungary , 4 July 1948 in Vienna) was an artist of the Vienna Art Nouveau and puppeteer , the art of Javanese myths theater on the European rendered world. The son of a printer grew Leitmeritz and studied from 1896 to 1899 at the Academy of Fine Arts in Prague, and in 1900 at the Vienna School of Applied Arts , 1909 before he finally moved to Vienna. In 1908 he participated in the art show part in Vienna from 1909 to 1912 and was an employee of the Wiener Werkstätte . In 1911 he married Emma Bacher-Paulik . A year later, he first worked with stick puppets in his puppet theater , the Golden Shrine , the artist Max Domenig had carved together with various figures. 1919/20 took place in the Museum of Art and Industry in Vienna, an exhibition titled “Richard Teschner” instead. 1925 saw the first public performance in Teschner studio.

As a painter, printmaker, sculptor and puppeteer he created in the thirties the figure mirror , since the death of his widow in 1953 in the Austrian Theatre Museum in the Palais Lobkowitz is preserved. The conventional proscenium stage was here in favor of a round, glass-protected panoramas, a kind of concave mirror with lighting effects, abandoned. Teschner, who is still on the Javanese rod puppets (Wayang -Golek figures was inspired), created not only the puppets and stage equipment for its pantomimic pieces themselves, but also composed the accompanying music – mostly, but not exclusively, using a Polyphons – and worked out the action of the pieces. So he took the lead of the Asian art stick figure game productions for European content, with his collection of old Javanese figures here and there certainly was not used. The tradition was maintained by Teschner’s death and despite the adoption of the character level of the museum by his staff until 1965 and later revived as part of a museum project. In spring 2006, the pieces were “Carnival” from 1930 and “The Basilisk” in 1937 on the board.

Teschner created the figure mirror addition, paintings, sculptures, bookplates , craft items, etc. A bronze draft was “grotesque on skis” from around 1920 March 2006 at Dorotheum for auction, a pitcher with beakers to Teschner’s design is the Austrian Theater Museum look. Teschner also created book illustrations, for example, published the 1921 “Visions of the East” / Villiers de l’Isle-Adam in the transmission of Erwin Rieger or, in cooperation with Thomas Oswald , for the published immediately after the war in 1945 “Atlas of the Constellations”. 1927 in cooperation with developed Carl Hoffman , the film The mysterious mirror. In 1956 in Vienna Währing (18th District), the Teschnergasse named after him.