RIVERS OF NIHIL song concepts for “The Conscious Seed of Light” 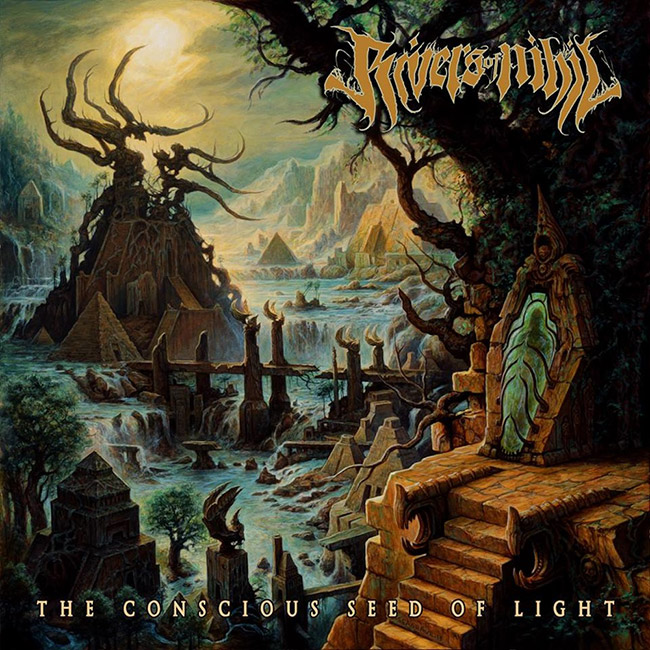 Rivers of Nihil’s debut album, “The Conscious Seed of Light,” will be released on October 14th in the UK. The album was recorded in March of 2013 at Mana Recording Studios in Florida with famed metal producer/musician Erik Rutan. While The Conscious Seed of Light is not necessarily a concept album traditionally speaking, Rivers of Nihil began this project with the idea that they would release four separate albums tied together with one common theme: each reflecting a particular season of a year. Bassist Adam Biggs elaborates; “The Conscious Seed of Light is intended to be representative of Spring and explores various themes concerning new beginnings, growth, and an attachment to the natural world in a post-human Earth. Unlike some concept records however, we wanted to allow each song to work on its own terms. Rather than have the songs rely on each other to move a specific story structure forward; they work within their own separate narratives, but ultimately serve the album’s broader concept.

“The Conscious Seed of Light”
Track by Track Rundown

1. Terrestria I: Thaw
As some of you may or may not know by now, “The Conscious Seed of Light” is something of a concept record. Now, does that mean that the record is one solid connected piece of music with a definite plot structure and easily identifiable characters? No. No it does not. What it does mean is that each individual song serves, to some end, a similar thematic purpose. That being said; this record is the first of four, each representing a different season, “The Conscious Seed of Light” is our “spring” album. We figured this would be an appropriate place to begin seeing that spring is often associated with new life, and new beginnings, not unlike the new beginning given to us with our first major release. Now, all of that aside, we have “Terrestria I: Thaw,” our introductory track. It starts with an unassuming buildup that leads into a fun 8th note feeling that we don’t use a whole hell of a lot, and it blends very well into next track. When I presented the idea of this song to Brody I really didn’t give him much to go on, but I think he really knocked it out of the park.

2. Rain Eater
This was the first track we wrote for the album, before Metal Blade so graciously entered the picture, before we actually knew we were writing a full-length release. This song went through a ton of changes, in particular, we kept adding onto the beginning of the track (I think it originally started at about the one minute mark). But this sort of thing happens a lot when we write as a group, and this is one of very few songs written for the record that were done in this way. I think you can hear a lot of us using what had worked in our older material within the confines of this song in a structural sense, and it really comes together in a gratifying way.

Lyrically, this song is probably some of my most personal work. I did it very quickly and naturally, and like a lot of the lyrics I write I didn’t really understand what it was about until way after it was finished. It’s about a man who achieves a deep connection with the planet by repenting for his human sins and planting himself in the ground and beginning new life as a tree. I have a feeling this song will be synonymous with our band for quite some time.

3. Birth of the Omnisavior
This song is an old favorite from our second ep that we decided just NEEDED the Rutan touch. There are a ton of small details to be gleaned off of each instrumental performance within this song because we’ve all had so much time to tweak everything just the way we wanted it, in that way it definitely has the benefit of age. “Birth” is something of an outlier on this record; it has an ultra-progressive/untraditional song structure and no real defined chorus section. This song has been a part of our live set list for a long time now and I doubt it’s going away any time soon, we all just have so much fun playing it.

4. Soil & Seed
One of the biggest stylistic departures on the record, Soil & Seed is a real beast of a track. Riff wise, it’s super easy to play when you consider some of the fret board gymnastics on the rest of the album, but there’s nothing quite like seeing the eager, mosh-happy faces of a crowd when we go into that stomp riff in the middle section. Even though the track features a vocal section of my very own, the lyrics are actually completely Jake Dieffenbach’s doing, and they’re some of my favorite we’ve ever had. There’s a sense of quiet malice behind a lot of these zen-centric lines and I just love that sort of duality in death metal.

5. Central Antheneum
This song was probably my favorite throughout the entire writing process, it’s a real sleeper if you ask me. The song has a half-time feel all the way through which is something we almost never toy with, it makes good use of our stupidly low tuning, there’s a cool hook and a really fun middle section. My favorite part of this song though has to be Brody’s use of melodic lead lines placed sporadically in the song to give the riffs the right texture, that sort of thing always takes a song to the next level. Oh and it’s really heavy.

6. Mechanical Trees
This song was sort of the first of a kind for us. It was the product of Brody and I assembling the basic song structure in Cubase and making a working demo of the song before we’d even attempted playing it together as a band, which is something that we’d never done up to that point. A lot of the riffs have a really open-ended, spacey feel too which is a departure from our usual claustrophobic riffing style. The lyrics paint a bleak picture of humanity’s future, wherein the environment has become so damaged that we are forced to rely on machines to create breathable oxygen for most living creatures. Eventually, this way of life becomes too much for Earth’s dwindling human population, so the powers that be lace the machines with hallucinogenic substances to ease the pain of death.

7. Place of Serpents
This song is equal parts shred and feeling…well maybe it tips slightly more toward shred, but there’s still plenty of feeling to be had here. In demo form this song was sort of an exercise in minimalism. There were very few harmonies, the bass and drums were super simple and there wasn’t much layer work going on. The version heard on the record is pretty much the polar opposite of that however; it’s a very dense song with a lot going on. There’s even a pretty large section that puts Brody and Jon’s post-rock leanings on display. Combine all of that with lyrics about tribal religious ceremonies and you have a song that you pick something new from in each listen.

8. Human Adaptation
Another one we pulled out of the vault. This song was part of our first ep and was actually the first song we ever put out for people to hear back in 2009. We sort of felt an obligation to this song’s history which was a big reason for its inclusion on our Metal Blade debut, but also it’s just a fierce bastard of a tune. This one is what really laid the groundwork for what this band would end up being; fast, complex, heavy and with an emphasis on hook-driven song structures.

9. A Fertile Altar
Musically, this song is a bit of a nod to all of our old-school death metal influences. It’s kind of a more straight-forward head banger with a bridge part perfect for fist pumping and all-round pit brutality. The lyrics were inspired by the disgusting cult actions of Warren Jeffs and his FLDS church in the early 2000’s. Jeffs gained notoriety for controlling the lives of families involved with his sect and preying on their children. However, I always envisioned this song to be spoken from the point of view of a wolf. Again, I really enjoy adding a layer of dualism within these songs.

10. Airless
Brody put this song together pretty much start to finish after we thought the writing process was pretty much over for this record. When we all heard the song it went without saying that this was going to be the album ender. It lacks a definite, rigid song structure in favor of acting as a sort of dark and ominous soundscape. There’s a little bit of odd-timing instrumentation here, a good bit of open space and Mr. Uttley leaves us with some really emotional guitar work.

The lyrics are reflective of that mood, there’s a lot here that deals with change and the uncertainty of life. It serves as a way to move into the summer album. The basic message is that you can cling to a feeling, an idea, a season, a way of life for so long but ultimately everything comes to an end.