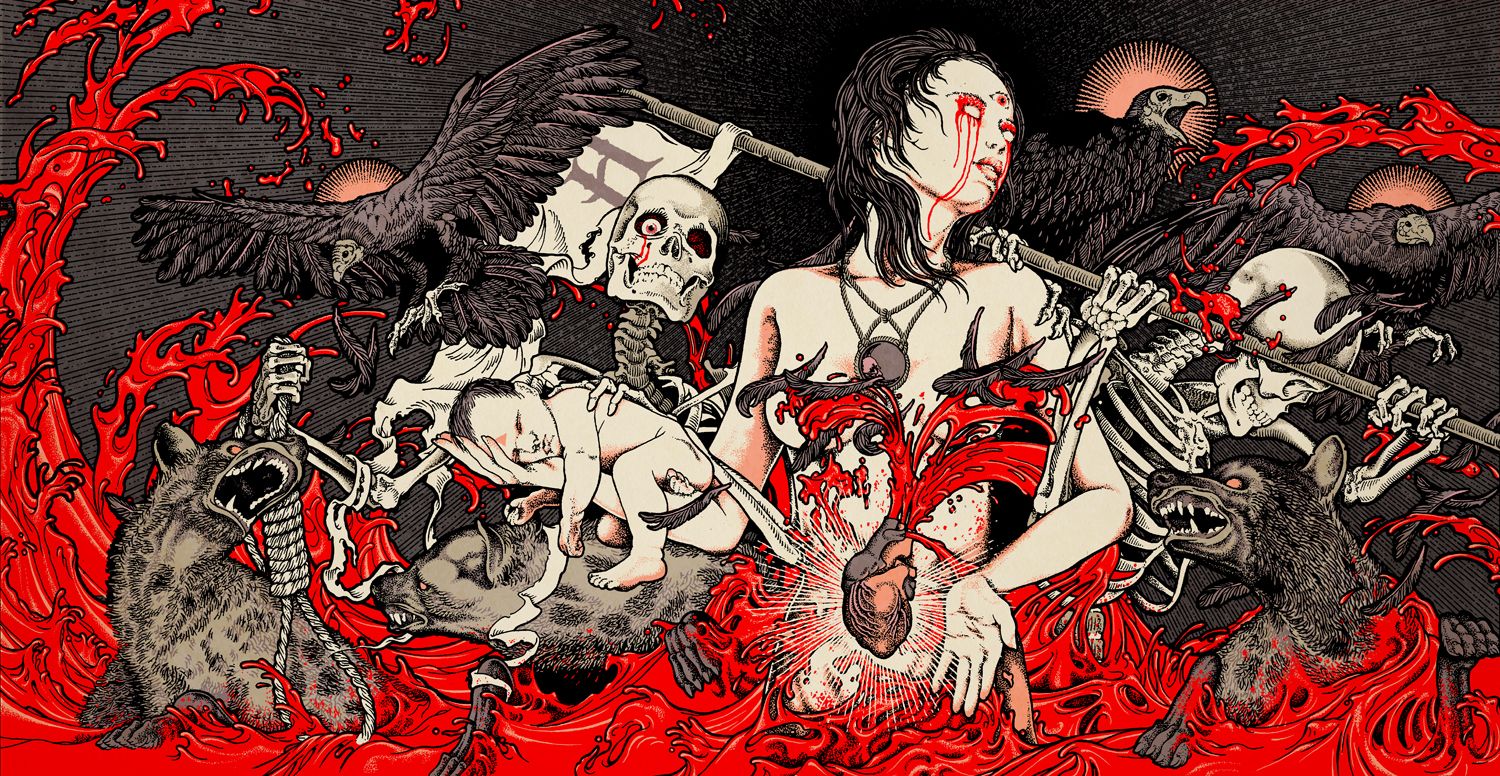 Ryan Begley: Creativity made of soil, sun and water

Born 1979 in Tisbury Massachusetts. The son of a Carpenter and a Nurse, owner and art director for two companies; Shirts & Destroy Inc. which produces limited edition T-shirts and merchandise for tattoo artists, Hardcore / Metal bands and Illustrators and his most recent endeavor ‘TrueBlack’ which focuses on American Made clothing. First off thank you for taking the time to answer these questions Ryan. We at Heavy Music Artwork appreciate it.

Ryan Begley: No problem! Thanks for the invitation.

HMA: Your website bio says you grew up off the coast of Massachusetts & took to skateboarding, tattoos and metal at a young age. Would you credit a combination of these three things as your main source of inspiration for you art, one more than the rest, or something else entirely?

RB: In the mid 80’s when I was still a kid my dad took me to the local surf shop and the Army Navy store and it changed the course of my life. Surfing was part of the local culture where I’m from and of course, it was a gateway to Skateboarding. A few years later In the early 90’s our town had it’s own skate shop. My friends and I probably drove them crazy just hanging around for hours with no money to spend on anything except a couple stickers here and there. They had Thrasher Magazine and I remember seeing ads for bands like Metallica, Sepultura and Bad Brains. It was all part of a world that was so mysterious and far away but having our own little piece of it felt incredible. It’s pretty rare that I skate these days. But the imagery of late 80’s early 90’s skateboarding has influenced me more than anything else. There are too many artists who influence me to start naming them but Vernon Cortlandt Johnson and Pushead are still my biggest heroes.

HMA: At what age would you say your artistic habits developed at?

RB: I always drew. When I was a little kid like 6 or 8 I would ask for drawing paper and colored pencils for Christmas. I loved drawing Grim Reapers, Dragons and Ninjas and I made my own comic books. I made toys too and used to think that’s what I would do when I grew up. I thought Tom Hanks in Big had the best life imaginable. I never had any trouble staying occupied. I was never “Bored”.

HMA: Did you develop your artistic talents on your own or did you take part in any sort of formal training?

RB: I took the foundation program at Maine College of Art and went to The Art Institute of Boston after that. Honestly, I was too young, and really had no idea what I wanted to do. I was playing in bands and didn’t think about anything farther in the future than the next show and weather some girl would be there. There are tiny lessons that I learned in school but 99.9% of it isn’t applicable to what I do. All my actual techniques and material choices are completely self-taught and the product of endless hours of failure and mistakes. Doing, is the best way of learning. Beyond what I learned in my first “2 dimensional design and composition” class, Art school in my late teens / early 20’s wasn’t the place where I learned to make art. I wanted to learn how to screen print and it wasn’t offered at my school so I got a job scrubbing screens at a print shop a few years later and learned how to expose screens and set up basic color separations. I think formal training is something you should hold off on until you’ve had a few more jobs and a more realistic idea of what you want to do with your life. I think an 18 year old kid who knows exactly what he wants to do and a realistic way to earn a living doing it is pretty rare. I don’t know what Art School is like these days. But if it’s still mostly drawing nude models with charcoal and memorizing slides then those fucking people should be locked up for steeling all that money from those kids and parents.

HMA: I was looking at the straps you designed for Tony Iommi & Geezer Butler. Very cool pieces. It says your pen & ink illustrations were then laser etched into the leather. Do you prefer the more traditional method of pencil/pen/paper when you do a piece or do you dabble in the digital realm as well?

RB: I’ve done plenty of Photoshop collages for bands. But the designs I do for Record covers and for my company TrueBlack all start with a pen and ink drawing. They are ultimately scanned and brought into Photoshop so they can be colored, sized and formatted for printing, but I don’t “draw” in illustrator. Personally, I just don’t love the look of it. It’s too clean and even when I see a really incredible piece of work done that way the first thing I see is “Adobe Illustrator” rather than “Pen and paper”. The medium is part of the image and I just need to connect with something in real physical space for at least part of the design. It’s really difficult for me to see the human hand behind something created entirely in Adobe Illustrator. It’s a way to supplement a huge amount of labor with a few slick clicks of a button. Obviously I can see the merit of that as a time saver, but I appreciate so much more the craftsmanship and evidence of labor in something created by hand. A plaster casting of a statue and a hand carved one are both beautiful but one is more impressive to me by virtue of the way it was made. I use Illustrator for wrapping text and setting up laser cutting but that’s really it. I’m not trying to knock it as a medium! But it is what it is.

HMA: When you get and idea for a new piece, describe to me your entire process from inception through to completion.

RB: It’s a fucking mess. I never get an idea and then stick with it all the way through the process. The more elements that are involved the more it changes. I’ve got so many things that I get 75% completed and then just shelve them because I’ve been starring at them for too long and I just cant see them anymore. There is a very brief “honey moon” period where I actually like what I’ve done and somehow convince myself that it isn’t just a total embarrassment but it fades and by the time I’m done all I see are mistakes. There has never once been a single thing I’ve put out that I believe I did my best on. All of it could have been better. But yeah, rough sketch, final sketch, ink, scan and color.

HMA: Do you always approach new pieces with a similar formula at the start or does it vary by project?

RB: I learn as I go. I’d be lying if I said I have any idea what I’m doing. Everything I draw is a knock down drag out fight just to get it finished. It takes forever and it’s a constant battle against self-doubt. “It’s 3:30 in the morning. Why am I doing this?” But you don’t really have a choice. You’re compelled to do it. I don’t know, It’s like chasing something that you’ll never catch. But you have to chase it. You just have to.

HMA: What aspects of artistic design initially appealed to you the most?

RB: Skate graphics and Military patches. Striking, bold outline and bright color. The confidence and deliberateness of that type of imagery speaks to me. It’s the same with Music.

HMA: Do those same aspects continue to hold their appeal for you today or have others evolved?

RB: That will always be there. I love when artists like Aaron Horkey lay in a really subtle color contrast of bold detailed lines. It gives you something to soak in when you’re up close. At a distance all you see is the outline of something, then when you’re up close, there is a texture that is so precise and deliberately executed. I’ve got a poster of his like that. The leaves are just solid pale green at a distance but when you get up really close there is a slightly darker green showing the contour of the leaves. I like those little rewards.

HMA: What projects have given you the most satisfaction over the years, or what are you most proud of up to this point?

RB: Honestly, those are the little moments I only have alone on those nights where I’m up at 3 o’clock and I turn a corner with pen techniques or some other little trick I learn. Discovery. It’s the most exciting thing. “THAT’S how you do that.” You feel like fucking Indiana Jones. Alone in the temple and the journey hasn’t been in vain. It only lasts for a moment and then you’re thinking about the next place you want to go. I hate all my work. Some of it has little moments where I think I was onto something but I just cringe at everything. It’s incredible when an artist you look up to compliments something you’ve done. But it doesn’t make me think “Yeah, that’s right. I knocked that fucking thing out of the park.” It just makes me think “Wow, what a nice guy, he complimented my obviously flawed thing because he knew it would mean a lot to me.”

HMA: Thank you again for your time Ryan. As we part ways, are there any tips or techniques you would like to relay to young up & coming artists?

RB: If you really want to be an artist don’t waste your time or anyone else’s. Talent is the seed. Endless hours of work are the soil, sun and water. And you have to know that you are not special. I am blown away at times by the entitlement of some young artists who contact us. Some are just blatantly copying an established artist I already work with and don’t understand why publishing their work wouldn’t make any sense to me. And some apparently think everything they make is wonderful when the lack of time or effort put into it is obvious. You have to be your worst critic. You have to see the flaws in what you do or else you can’t improve. I believe that anyone can learn to do anything. The next guy or girl who is going to blow us all away with their work is the kid sitting at home alone on Saturday night putting another 12 hours into a drawing they’ve been working on for a week already. It is simply a matter of pressure and time. I have zero natural ability. Zero. Any progress I’ve made as an artist or illustrator is the product of an absolutely stupid amount of time and sweat. If you come at it totally half assed with a “me too” kind of attitude, you’re going to ruffle the feathers of people who have literally dedicated their life to it. No one is there sitting next to you at your desk cheering you on or pointing out your mistakes. Self-motivation and criticism are crucial. Keep in mind though; I have no fucking idea what I’m talking about. I’m just another asshole trying to figure it out himself. None of us have any answers. The whole thing is in navigable chaos. Best of luck.