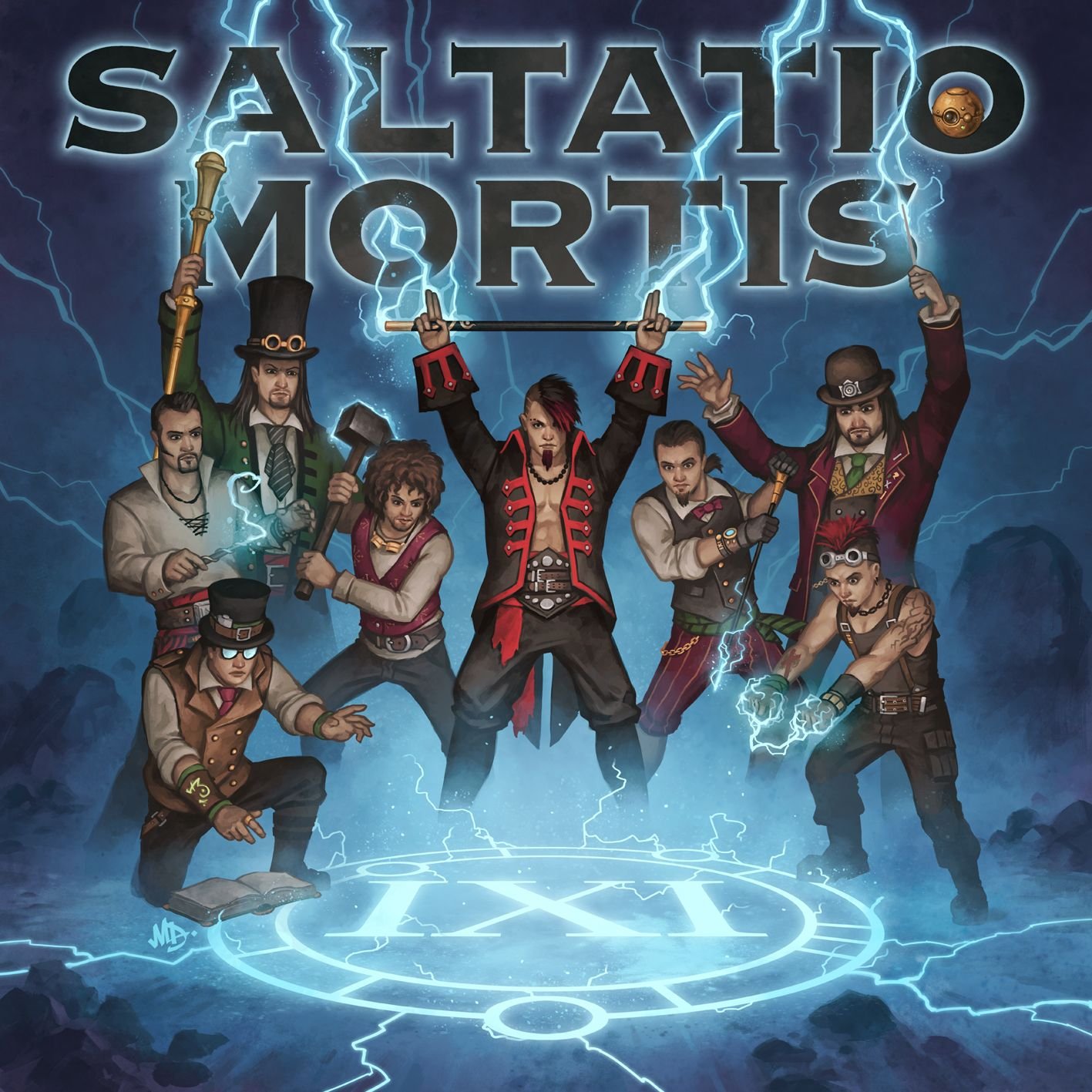 In the Dark Ages people thought that death is a person dressed in black playing the flute or fiddle almost all the time to attract the living. Those poor souls listening to the melodies of his music followed him right to the realm of the dead. One day a few gleemen had the idea to play special melodies to drown out the deadly melodies of the Grim Reaper. Those wonderful melodies of the minstrels should scare away the dead. Those songs were called: Saltatio Mortis or Dance Macabre.

“In our opinion, we face dark times as well – however in a different way – that is why we have chosen to name our band after the former minstrels of the Middle Ages “Saltatio Mortis. Our intention was to bring joy in the hearts of people and smiles on their faces.”

HMA: You released a live recording, Manufactum III, and your new album, Das Schwarze Einmaleins, in August of last year. What themes do you explore through your latest lyrics and why are they important to you?

But you were asking about the lyrical themes of our rock album.

We have a great mix of historical and modern themes on the album. However, mostly our album contains critical themes like anti-war songs – others are against the beauty fetish of our times. Our single “Wachstum über alles” is a critical song against greed for profit regardless of the consequences. The first song on CD “Früher war alles besser” we dispute and deal with the statement that in the good old day’s everything was better.

Why did we choose these themes? That is pretty easy. These are the issues and concerns that surround us each and every day.

HMA: Talk me through your songwriting and recording process. How long did it take to put together “Das Schwarze Einmaleins”?

Saltatio Mortis: We worked nearly two and a half years to finish the album.

The final recordings were done in about 10 weeks including the mix and mastering process.

HMA: The new album’s sound has been described as “earthy”, “electric” and “crystal clear”. What was it like working with your producer, Thomas Heimann Trosien, and do you plan to collaborate again on your next album?

Saltatio Mortis: Your description nailed it pretty well. The sound on our album is the result of our close collaboration with Trosi. It is our 5th album with him. In the last 10 years, we learned to listen to each other – to combine our ideas, thoughts and musical works to create the best possible songs. Trosi is a part of our Saltatio Mortis family and he will be with us for our next production too.

HMA: The Das Schwarze Einmaleins album cover is vivid and colourful and is sure to stand out on the racks in music stores. Who designed the artwork and how much input did you have on the image?

Saltatio Mortis: We all had the common idea of doing some kind of a Steampunk comic cover this time. We searched for a great artist to bring our ideas to life.

We found that artist in Mr Matt Dixon. He is the one who designed characters for Blizzard Entertainment (WORLD OF WARCRAFT) and many others. Our hurdy-gurdy player Falk used to be – and still is – a big comic fan and had been the owner of a big comic shop in his hometown Karlsruhe. He still has some contacts and this is how we got to meet Matt. Matt designed and realized the Artwork of DAS SCHWARZE IXI.

In the book we got two other great comic artists joining Matt.

Next, to Matt Dixon, two more great and talented artists were involved in illustrating the comic – Kevin Crossley and Dave Candell. Together they created a colourful and picturesque storybook about the adventures of the band Saltatio Mortis in the Steampunk world of Erebeum. You have to check it out.

HMA: You have an upcoming German tour; are you looking forward to it? Your stage shows have been described as “elaborate” – how much time goes into preparing for a tour?

Saltatio Mortis: We just about practised twice a week for about 5 hours.

But life taught us, that – no matter how hard we prepare a tour – concert or event – things can break down from one second the next.  Last Friday – right at the beginning of our tour our drummer Jean had to be brought to the hospital due to extreme headache. After hours of examination, the physicians found cerebral bleeding. We were shocked and thinking of cancelling the entire tour. However, Jean himself let us know that we should continue without him – no matter what happens. It was the hardest show we ever performed. But we did it for Jean. Two hours before our performance we had to do a new set list – check out how our new songs would work out without him. However, the toughest of all for us was – standing on stage without him – knowing that our friend, who normally stands with on stage with us, is fighting for his life in intensive care. We were overwhelmed and happy when we got the news the next day that: EVERYTHING IS OK! He had great luck and will fully recover within the next weeks. The time before the relieving news was pure hell for all of us. Not to mention how frightening the whole situation must have been for Jean.

HMA: Aside from your future touring do you have any other plans for the band in 2014?

Saltatio Mortis: Our main goal is to stay well – and – of course – we cannot wait to be on stage again with all members of Saltatio Mortis. Beside this, we will perform on many major festivals in Germany – to name two of them: METALFEST FREILICHTBÜHNE LORELY and the WACKEN OPEN AIR.

We are also working on new songs for our upcoming album in 2015 – so far we wrote already 12 songs. There will be a whole lot of preproduction being done this summer.

Thanks for the time and the chance for this interview. All the best and maybe we see you on the road one day.