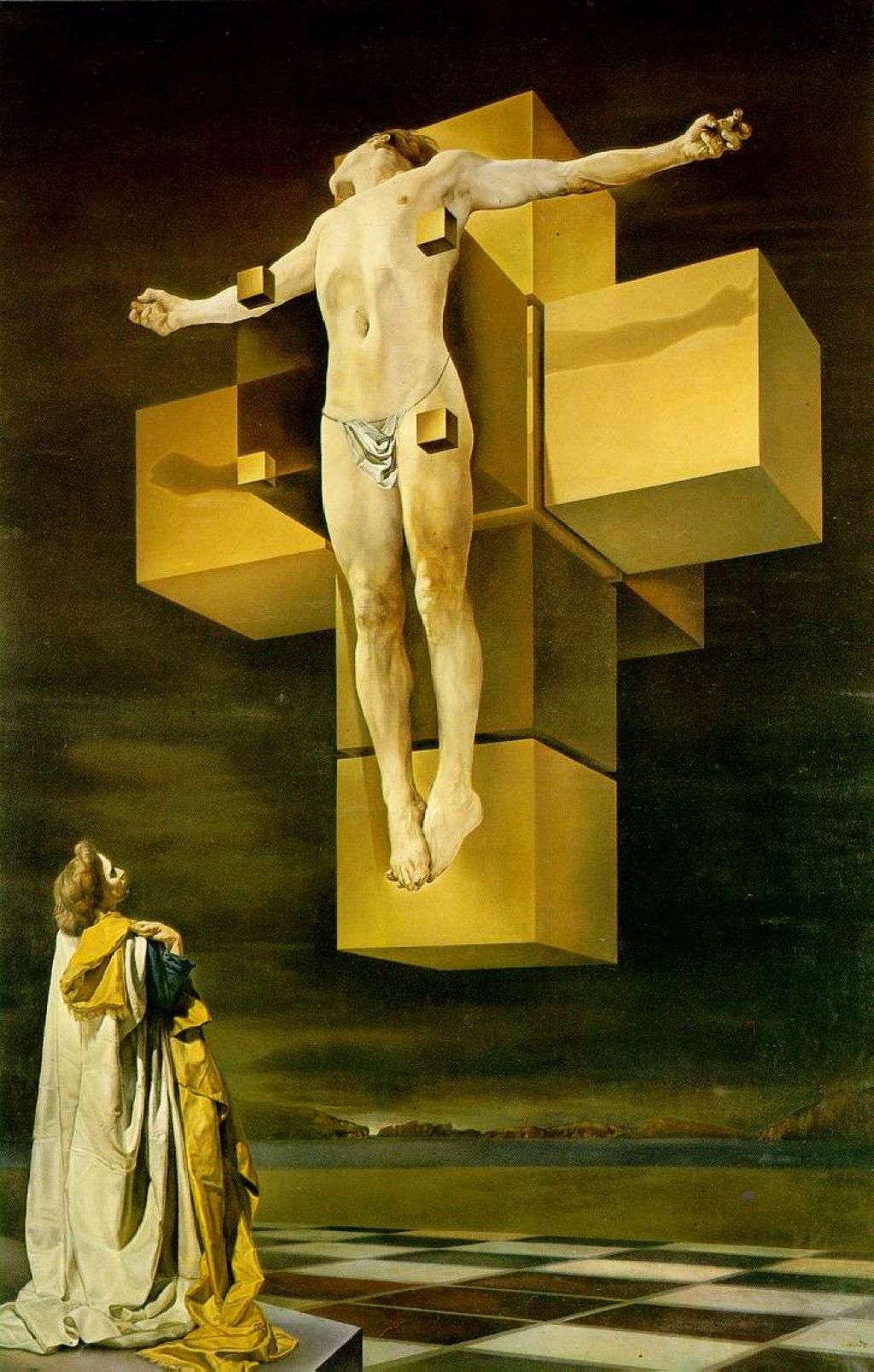 “Spanish painter. Born into a middle-class family, he studied at the Academy of Fine Arts in Madrid, where he mastered academic techniques. Dalí also pursued his personal interest in Cubism and Futurism and was expelled from the academy for indiscipline in 1923. He formed friendships with Lorca and Buñuel, read Freud with enthusiasm and held his first one-man show in Barcelona (1925), where he exhibited a number of seascapes. He wrote the screenplay for Buñuel’s Un Chien Andalou (produced in 1928), largely thanks to which he was adopted by the Surrealists. In Paris he met Picasso and Breton, and his involvement from 1929 onwards, his effervescent activity, his flair for getting publicity through scandal and his vivacity which counterbalanced the political difficulties encountered by the group, made him a particularly welcome addition.

“Over the next few years Dalí devoted himself with passionate intensity to developing his method, which he described as ‘paranoiac-critical’, a ‘spontaneous method of irrational knowledge based on the critical and systematic objectivation of delirious associations and interpretations’. It enabled him to demonstrate his personal obsessions and fantasies by uncovering and meticulously fashioning hidden forms within pre-existing ones, either randomly selected (postcards, beach scenes, photographic enlargements) or of an accepted artistic canon (canvases by Millet, for example). It was at this period that he was producing works like The Lugubrious Game (1929), The Persistence of Memory (1931) and Surrealist Objects, Gauges of Instantaneous Memory (1932). Flaccid shapes, anamorphoses and double-sided figures producing a trompe-l’œil effect combine in these works to create an extraordinary universe where the erotic and the scatological jostle with a fascination for decay – a universe that is reflected in his other works of this period, including his symbolic objects and poems (La Femme visible, 1930; L’Amour et la mémoire, 1931) as well as the screenplay for L’Age d’Or (1930).

“It soon became apparent, however, that there was an inherent contradiction in Dalí’s approach between what he himself described as ‘critical paranoia’ – which lent itself to systematic interpretation – and the element of automatism upon which his method depended. Breton soon had misgivings about Dalí’s monsters which only lend themselves to a limited, univocal reading. Dalí’s extreme statements on political matters, in particular his fascination for Hitler, struck a false note in the context of the Surrealist ethic and his relations with the rest of the group became increasingly strained after 1934. The break finally came when the painter declared his support for Franco in 1939. And yet he could boast that he had the backing of Freud himself, who declared in 1938 that Dalí was the only interesting case in a movement whose aims he confessed not to understand. Moreover, in the eyes of the public he was, increasingly as time went by, the Surrealist par excellence, and he did his utmost to maintain, by way of excessive exhibitionism in every area, this enviable reputation.

“In 1936, Dalí returned to a classical manner of painting, switching haphazardly between Italian, Spanish and pompier styles. From 1939 to 1948, he lived in the United States, cultivating his persona as a genial eccentric, and earning from Breton the nickname Avida Dollars (an anagram of his name) in 1940. In Spain once more (at Port Lligat), he provided a constant source of interest for the gossip columns, which described the parties he threw, his carefully orchestrated ‘eccentricity’ and all the pomp and ceremony of his church wedding in 1958 to Gala (Éluard’s first wife), whom he had first met in 1929 and who was to remain the only woman in his life, his muse, his model and his most effective agent. If he declared that Meissonier was a better painter than Picasso, that Perpignan railway station was the centre of the world, or that Francoism had saved Spain, these were precisely the sort of statements that people expected of him. His painting, in the meantime, while technically brilliant, was based on ideas that were not perhaps as bold and new as they seemed (Christ of Saint John of the Cross, 1951, for example, or the Crucifixion of 1954) – more a series of confidence tricks designed to convince the public that Dalí was borrowing from nuclear physics or ‘inventing’ the anaglyph relief. In 1965, he turned his hand to sculpture, contenting himself with repeating themes from his paintings: a Venus equipped with cupboard drawers, elephants with spiders’ legs, soft watches, etc., worked in bronze or crystal. The purpose of the post-war lithographs was principally financial: their uncontrolled print runs and more or less authentic signatures brought discredit on the artistic mass market of the 1960s. Such ‘scandals’, however, like the denunciation of fake Dalís in the 1970s, served to keep a myth alive – a myth that has proved remarkably durable if the success of both the Dalí museum at Figueras, which the painter himself set up in 1974, and the major exhibitions periodically held in celebration of his ‘genius’ is anything to go by.”

From: ART20, The Thames and Hudson Multimedia Dictionary of Modern Art