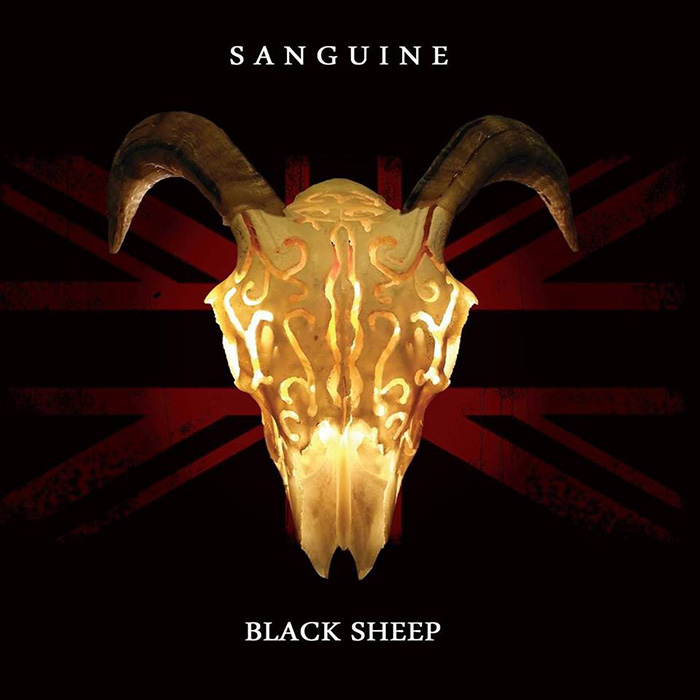 Songs in their own world

Sanguine is a hard-hitting driving metal and rock riffs, mixtures of melodies, vocal ranges which include screams and singing both from front-woman Tarin Kerrey and guitarist Nick Magee. Sanguine has created a new unique sound, jumping between styles their eclectic songwriting keep you guessing what the next track will sound like. Nick explains “we know who we sound like, each song is like its own world. The various styles we write in do not detract from the fact that overall our songs sound like Sanguine, no one else… we are Sanguine.” Sanguine’s new album ‘Black Sheep’ is due for release in 2016, it features tracks co-written with Jesper Strömblad (In Flames) and produced by Daniel Flores.

HMA: Welcome Sanguine to Heavy Music Artwork. What is ‘Black Sheep’? I mean in your terms and interpretation?

Nick Magee: Hi! Thanks for having us. ‘Black Sheep’ reflects how we feel about ourselves as a band. We’re the Black Sheep of the music industry. At the start, nobody knew which bands to put us on with so we ended up playing death metal shows one minute and reggae shows the next!! It was pretty funny sometimes. We didn’t care where we played – our attitude became infectious and the live shows started getting a reputation for kicking off. Still to this day we play with a large mix of bands. To give you an example, in one run we played acoustically at Download Festival, supported Megadeth the next day and then Californian rockers OPM followed by Cancer Bats!?! We love it. People just accept that we are our own thing now so being the Black Sheep has almost become an identity in itself.

HMA: Can you share with us the troubles and tribulation on recording and releasing an album?

NM: The hardest thing these days is the sheer amount of work involved in releasing a record. In the 1970s bands would record a record, release it and tour it. They would sell the record at shows and in shops and that would generate the money to continue being a band. Times have changed to a point where music is devalued massively and quality is suffering. The world is saturated with different formats and incompatible technology. There is an overwhelming amount of platforms that a band can utilise but the time and energy vs the return is often not worth the payoff. Sanguine is a traditional DIY in the sense that we physically go to the places that we want to bring our music to. We are very much in reality in that sense – not hiding in the digital world. This of course takes time and you have to raise funds to do it all – we did that and learnt a hell of a lot about the music business on the way. Thankfully I can say we got out of the fog ok, but I know a lot of great bands that just couldn’t survive in today’s climate.

HMA: Under your Facebook short description “Science will hold true, faith will make plans…” can you tell more about this statement?

NM: It’s actually a line from a song we wrote years ago called ‘Tonight’. We are stone cold realists when it comes to our beliefs. None of us subscribes to any cults/gods or notion that a higher force is watching and scrutinising everything we do! We believe in looking at the hard evidence of life whilst having a healthy appetite for fantasy. Just be clear you know the difference! A frightening amount of people don’t!!! Faith is just faith. To us, it means ‘whatever will be, will be’.

HMA: For those who may never have heard Sanguine, could you tell us a brief rundown of the band?

NM: Damn! That’s always the hardest question when it comes to Sanguine. The short answer is we’re a female fronted alt metal/punk/rock band with a very distinctive singer. We’re as soft as we are brutal, we’ll kiss you then bite your ear off.

HMA: Are there any guests on the record?

NM: Yes there is – we were lucky enough to write a couple of songs with Jesper Stromblad (Founding member of In Flames, HammerFall, Dimension Zero and The Resistance). It was a really natural process – we headed out to Gothenburg with a handful of idea’s, Jesper had a few ideas’s and the songs just connected! It was a turning point in Sanguine’s history and I’m glad we did it.

HMA: What thoughts did you have around this album? Was there anything in particular that you wanted to achieve?

NM: Absolutely. At the time we were writing there were no new bands that we really respect. Everything felt very cheap and fad based. Bands all had names that sounded the same and their albums were half-assed. You would get one good single than 10 songs that all sound the same. We wrote Black Sheep as F**K you to all that. We made each song it’s own world and think we have produced something that people are going to keep going back to.

HMA: Can you tell us about the cover art and the artist that made it?

NM: That came about via a strange string of coincidences, to be honest… If anything was ever ‘meant to be’ it was this. I was taught how to carve bone by a Maori tribesman who had relocated to the UK to help his kids gain an education. I respected him so helped him integrate a little into the culture. He insisted on paying me somehow but I didn’t want his money so I asked for him to teach me basic bone carving by hand. I decided it would be cool to try carving a skull. I was drinking with a friend one night and he mentioned seeing a sheep skull/carcass up on the moorland. I dragged Tarin and some other mates with me the next day to find it. They all thought it was a bit weird but supported it anyway… So after a few hours of searching for this thing, my friend finally spotted the body and we headed over to it. I hadn’t really thought about what I was going to do when I found it so hadn’t prepared anything. All I had in my van was a hammer, chisel and a plastic carrier bag!!! The next bit was pretty gory to be honest, but I really wanted the skull so I just chiselled it off the spine and thought about nice things to mask the horror happening in front of me!

I took it home and boiled it for 3 days in Tarin’s garden – it was riddled with maggots just to make it that little more unpleasant (funny she didn’t want her saucepan back after that). I then just set about carving it in a way that felt right. When I was done, I just put it on the shelf and moved on to another project. Weeks later we were going over various album art idea’s and not really connecting with any of them. Then someone said what about the skull Nick carved – took it down off the shelf and an hour or so later we had our album cover. Tarin is awesome at graphic design so she created the final cover. The red and black Union Jack is a nod to the fact we are the UK. It was a true team effort. We like it as it feels more personal than just outsourcing it to ‘some guy’. It really is a part of us.

NM: Tarin has always raised eyebrows even in the early days. One of the first people to recognise us early on was Mikee W Goodman from Sikth. He nurtured us in the early days and gave us a lot of confidence. Sikth were massive at the time and we were nothing! I think his belief in us kept us true to our real selves. Mikee was working with Adrian Smith on Primal Rock Rebellion – they needed a female singer and a few were put forward – I won’t say who but all of them were established, artists. Even though Tarin was not known at that point they decided it was her voice they wanted. Next minute we were in the studio with members of Sikth and Iron Maiden laying down songs. She ended up on 4 tracks on the album I think. It’s a killer record… so many awesome tunes. Adrian is a legend – I grew up listening to Maiden so it’s awesome to know he’s rooting for us.

Thanks for having us! Swing by our http://www.facebook/sanguineband.com and say hi. Tours are being planned for 2016 and Black Sheep is coming to a town near you.