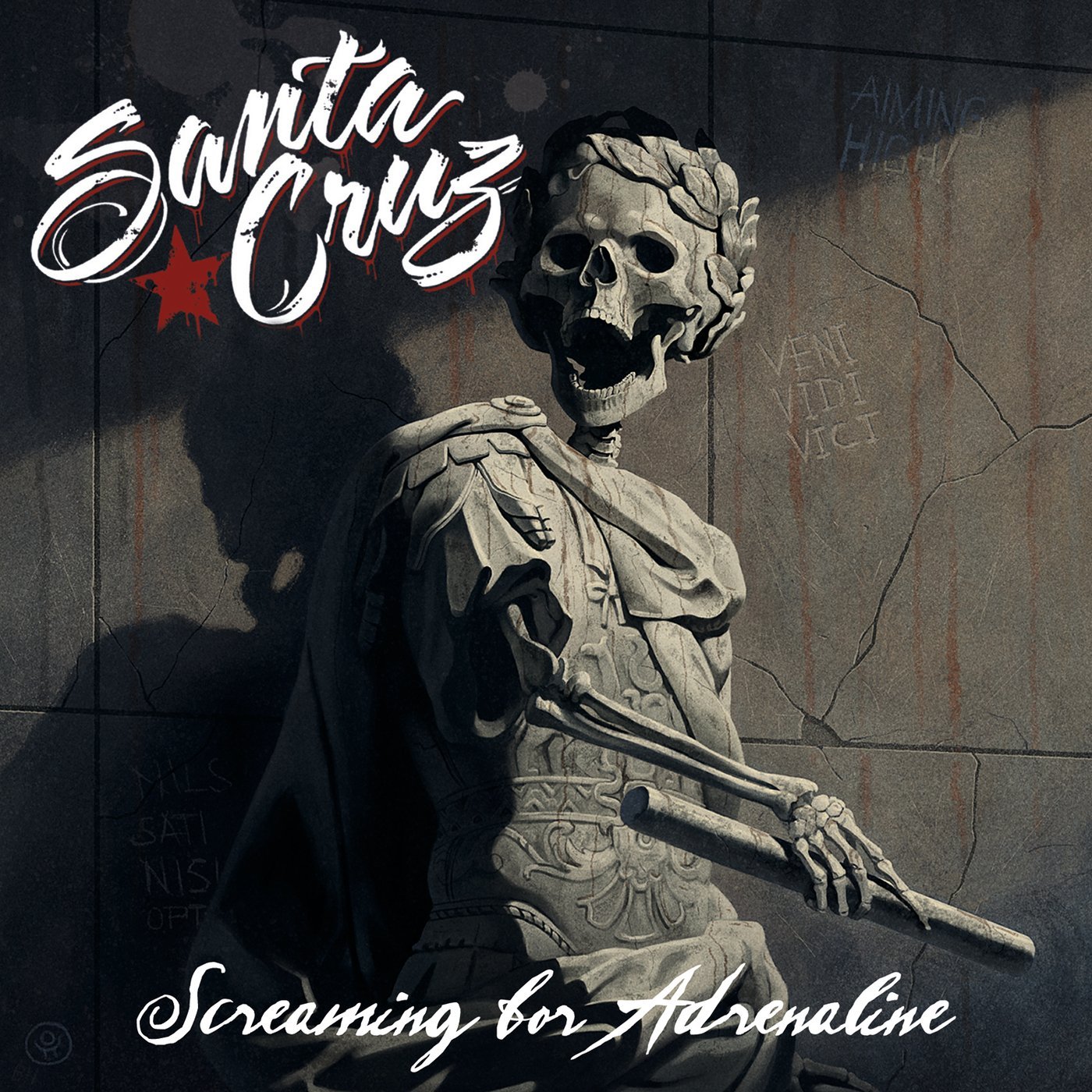 Finland is a country well known for exporting some major names in metal and rock music. Santa Cruz is one of those names. A promising, young band, that stands out with its highly energetic guitar work, powerful lyrics and the ability to deliver a powerful live performance. After the release of their self-title EP ‘Anthem for the Young ‘n’ Restless’ they signed on to Spinefarm Records and shortly after released their first studio album: ‘Screaming for Adrenaline’. I had a chance to sit down with the boys from Santa Cruz: Archie (vocals, guitar), Johnny (guitar, backing vocals), Middy (bass, backing vocals) and Taz (drums, backing vocals) before their London show at Camden’s Barfly so we could talk about their tour, the album and their lives.

Andy/HMA: What’s up guys? How you likin’ London?

Santa Cruz: It’s been fucking great. We arrived just this morning at a time that we’re, y’know, usually sleeping. [Laughter] It’s just been great. We’ve just been out eating and drinking and enjoying the sunshine. It’s just been one of the best moments of our summer, man.

Andy/HMA: First time I saw you play was at the Green Room at Bakkari. Next time was at Circus after Crashdïet, Hardcore Superstar and Mötley Crüe. I believe you just played a gig in May at Tavastia. Now you’re here. You’ve had a lot of success. How’s it feel?

Archie: Well it feels great of course but y’know we’ve been working a lot to reach the goals we’ve reached.

Archie: Yeah, so basically we had a lot of years where nothing happened. We just wrote songs and toured these youth clubs.

Johnny: We played like a 150 gigs before we got a deal.

Andy/HMA: You’re kind of like Finland’s golden boys. Every time I go to Helsinki it seems like everyone’s talking about you. I see a lot of people sharing your music on Facebook from all over the world. Tell me more about that. Do people recognize you on the street?

Santa Cruz: [Laughter] Well, it depends on where you walk and at what time. If you’re walking on the club scene at night then it does happen but if you go to, for example, a grocery store, then it’s a different deal, y’know? We’re far from a household name in Finland but people know us on the rock scene definitely.

Andy/HMA: So if you’re up in Jyväskylä most people are probably not going to know you?

Santa Cruz: [Laughter] No, probably not.

Andy/HMA: So you ever been to Santa Cruz? What’s up with the name?

Archie: [Laughter] No, no, it’s just – y’know, there’s no story behind the name. I just thought it sounded cool. I was in fifth grade probably when I came up with that. I just saw it on a map and I thought ‘that sounds fucking cool’. It’s like Mötley Crüe. Usually all the hair bands or whatever have names like ‘Roxxy Hell’ or ‘Hairspray Horror’, y’know, all the same kind of names. So Santa Cruz, you know, it’s just the name of a fucking place but it is more original.

Johnny: I remember when Archie came up with the name, I was like, yeah that’s cool.

Middy: It sounds cool too.

Archie: In the end it doesn’t matter what the band is called as long as the music is good. Some of the biggest bands in the world have stupid fucking names like Foo Fighters. If the band is big no one cares what the name is.

Andy/HMA: Explain the visual concept of choosing the album cover. It’s the skeleton of Julius Caesar. It’s a dead figure of historic authority; the color scheme is almost monochrome, not very typical of glam.

Archie: Well, in the song ‘Relentless Renegades’ I came up with the lyric theme of ‘I came, I saw, I conquered’. Y’know I thought, well it’s a quote from Julius Caesar, so the idea came to my head that that song could have a skeleton version of the legendary fucking sculpture that’s in the Louvre or something. Y’know, a rock’n’roll version of Julius Caesar, that was just the goal.

Taz: Because he ain’t that good looking a guy anyway.

Middy: And it’s a piece of art because usually album covers are pretty shitty so we got a dude who painted it.

Archie: Usually you know there’s just a picture of the band; the logo put somewhere and then the album name. Usually it’s just like that. Few people do it like they did in the old days, y’know, have a painter do a proper piece of art on the cover. That’s what we were aiming for.

Taz: And the good thing about the artwork is it doesn’t age but if you have a picture of us and we look back at it twenty years from now, well…. [Laughter] But this cover never ages.

Andy/HMA: I loved that because I’m a big fan of history. Are you guys interested in history?

Archie: Well history was always my favorite subject in school and as I’ve been travelling around the world I’ve been becoming more interested in architecture and history and shit but….yeah, it’s just, I think that was fascinating thing to do, what Julius Caesar did. It just came up to my mind and I started thinking about it more.

Andy/HMA: Yeah because most of your lyrics are about living fast, being young and crazy….and I thought that ‘Veni. Vidi. Vici’ was such an appropriate line.

Archie: Yeah man, totally that’s what we do when we come to town. We wanna see and we wanna conquer.

Andy/HMA: For this album the choruses have a gang vocal effect, the guitars are really wicked fast and the whole thing feels like always gonna jump out of the track, it’s so energetic. Tell a little bit about how the idea for this sound came to fruition.

Archie: Well, it was just natural. I think that’s the way we’ve always sounded. It’s natural. We just came together and the lyrics come after the song is written. And for ‘Aiming High’ and ‘Anthem for the Young ‘n’ Restless’ it’s not egotistic, it’s just, you know, songs for revolution.

Taz: You cannot write politics on those tracks.

Johnny: It’s basically just a celebration of life and how to live it, man.

Andy/HMA: You’ve played on stage with Henry Lee Roots when he was in Sonic Roots and Vince from White Flame has been a guest singer. Who would you like to share a stage with?

Andy/HMA: Finland has bands like Hanoi Rocks and The 69 Eyes. Do young Finnish musicians have a tough time filling those shoes?

Taz: Well, I think we’re kinda competing with the bands from the US. I don’t think we have to fill the shoes of any of the Finnish bands.

Archie: That is a pretty fucking rude thing to say, man.

Taz: No, I don’t mean it that way but I mean, I don’t think we’re really trying to fill anyone’s shoes.

Archie: I think we’re just so different from bands like The 69 Eyes.

Archie: [Laugher] No. I do think there are fucking good bands in Finland and we have to be good too.

Taz: There’s not a lot of competition between Finnish bands. Everyone knows everyone and there’s a lot of support.

Andy/HMA: You’re all young guys, has that ever affected people’s opinion of you?

Santa Cruz: A couple of years ago, yes, but not now. Usually when somebody sees the show they have nothing to say. Usually it’s only been a positive thing that we’re young because usually everyone is like ‘fuck you’re so young but you’re so good’. You know it’s better like that than ‘you’re so old and well, I can understand why you’re so good because you’re so fucking old.’

Andy/HMA: Have you ever been inspired by world events, movies, literature?

Archie: Movies definitely are a big influence on me. I had this one moment in my life when I wasn’t sure if I wanted to be a musician or a film director. It was like when I was fourteen but I still have a passion for movies and they definitely inspire me. As well as just seeing the world.

Taz: I think you made a good choice though.

Andy/HMA: What’s in store for Santa Cruz now? What’s the next step?

Andy/HMA: I read somewhere that you guys were gonna get the band logo tattooed as soon as the album was released. So, you got ‘em?

Archie: That was the plan but nobody has done it yet.

Taz: Maybe the next thing is when it sells platinum.

Archie: Well I have the Caesar from the cover tattooed on my breast. It’s the only band related tattoo that anyone of us has.

Johnny: We thought that on Sunday we could take this cruise around Camden.

Archie: Actually on Sunday we had this plan, since we’re here in the UK we’re just gonna get ‘CRUZ’ tattooed on our knuckles. I don’t know if these guys are in but me and Johnny definitely are.

Andy/HMA: Who helped you get to where you are today? Who are you grateful for?

Taz: And of course we’re gonna have to thank Jani, our booking agent and record label.

Johnny: And everyone who got us out on the club scene in Helsinki where Spinefarm found us.

Andy/HMA: Are your families musical?

Archie: Well mine’s not in any way.

Middy: My mother’s side is.

Taz: My mom’s kinda musical but my dad can’t sing the same not twice

Archie: There hasn’t been a single musician in my family that I know of. There are people that play the piano but nothing more.

Andy/HMA: What have been the best parts of this tour? Crazy nights, anything like that?

Archie: [Laughter] In Finland in summer it’s so fucking great because the sun never goes down. I think one of the best parts has been the parties after the shows when the sun is up, it’s like 4am and the sun’s up and we’re just chilling somewhere outside in Finland and the feeling is really good.

Middy: I think the funniest moment was when I pissed in the kettle and made coffee for Taz.

Taz: Well that wasn’t the highlight of my tour.

Andy/HMA: So how do you guys see the whole glam rock scene with all the new bands and fans?

Santa Cruz: As an underground scene pretty much because there’s no mainstream rock’n’roll scene the way there used to be. But there’s a big underground scene and we see it as a bubble that is trying to burst into the mainstream. We think that’s going to happen.

Andy/HMA: Well yeah and if more people tried to be original like you guys rather than copying whose popular right now maybe it would.

Andy/HMA: What do you love most about getting to play music?

Archie: The free booze of course.

Archie: Just the whole lifestyle. It’s like being on constant vacation and getting to play music at the same time.

Taz: I could see a worse job than this.

Archie: This sounds pretty fucking boring but I have to say this. The possibility to express yourself in any way you want and fucking shred the guitar.

Johnny: Just getting to do whatever you want.

Andy/HMA: Kiitos, guys for the interview.

Santa Cruz: Kiitos, man. It was a fucking pleasure man.