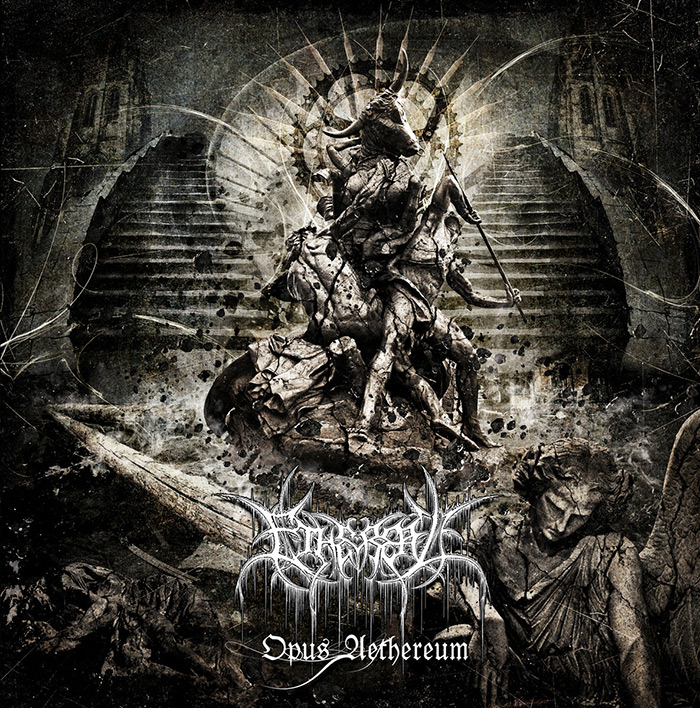 Earlier this year, British black metallers, Ethereal, unleashed their newest collection of sonically-depraved tracks, titled ‘Opus Aethereum’. The album comes accompanied by an elegant, highly symbolical mixed media artwork spawned by designer, Santiago Francisco Jaramillo of Triple Seis Design. Jaramillo already has in his resume imagery created for bands like Pestilence and Deeds Of Flesh, among others. Below, Ethereal vocalist, Naut, and lead guitarist, M-Inaz, briefly comment about his experience working with the Ecuadorian artist.

HMA: Why did you choose Santiago as the designer for cover the cover of “Opus Aethereum”?

M-Inanz: Santiago has worked on artworks for some of my favorite releases (i.e Pestilence, Amon and Deeds of Flesh) This is one of the reasons I was pleased when he accepted the challenge to work for us. We all saw what he was capable of and he didn’t disappoint!

Naut: We were all fans of Santiago’s work before we contacted him about doing our album, so of course we were excited to have an artist of his caliber involved with “Opus Aethereum.”

HMA: How does this artwork relates with the overall lyrical content of “Opus Aethereum”?

M-Inanz: It definitely helps to set the scene for the album, which is what artwork should do! It combines religious and mythological imagery set in and around a new paradigm. It appears post apocalyptic with the beast triumphant on his throne at the center of the image.

Naut: The imagery in the artwork mirrors the albums lyrical content, and so I think the image helps to embellish and enrich the listening experience. Cohesion between the sonic and visual aspects of Ethereal is very important to us, and the choice of album artwork was no exception.

HMA: Tell us about your reactions about seeing the final artwork integrated as part of the physical version of the album.

M-Inanz: I remember when we received the first copy of the artwork – It was amazing! We had tried several artists to design our vision but when we received the Triple Seis work – it looked world class. It fitted the subject matter in the lyrics and also sets the mood for the music.

Naut: As soon as I saw this piece of artwork, I knew it was the perfect choice for “Opus…” I had an idea in my mind of how I would like the album to look. However, not being an artist myself, it was very hard to articulate. When I saw the Triple Seis design, it captured perfectly the images I had in my mind. Sometimes, things simply fall into place.

HMA: Judging your works, it feels that this is the first of many collaborations to come with Santiago.

M-Inanz: ‘Opus Aethereum’ has been reviewed all over the world. The artwork is ALWAYS mentioned for looking professional and well designed to fit the music. That has confirmed that our instinct to work with Santiago was well worth it!

Naut: I have heard lots of praise concerning the album art, I would hope to work with Santiago again in the future.