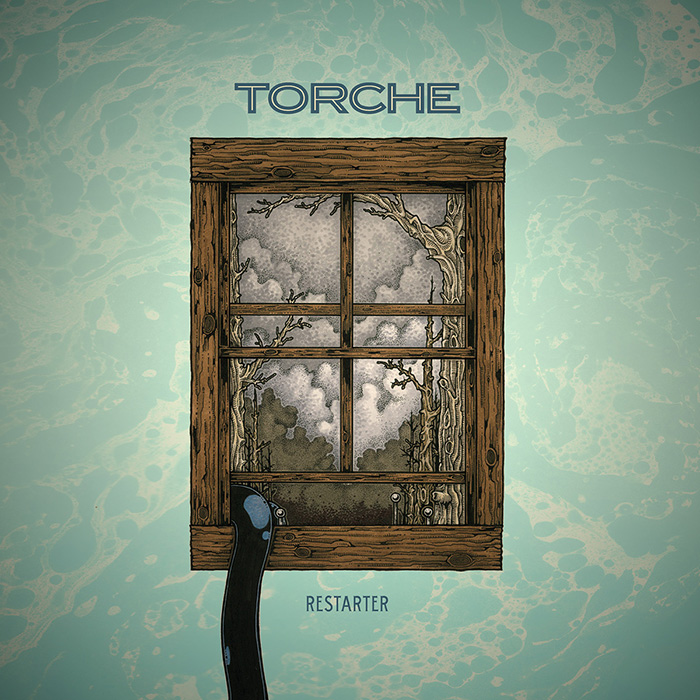 For every release that I have done for Torche, it starts with a phone call to Steve to hash out ideas. Since we’ve been working together I’ve noticed that I don’t need much direction to understand and execute exactly what they’re is looking for. This time around he just wanted something “dark” and in contrast to the “Harmonicraft” art. The theme was the extermination of the human race without the use of obvious skulls. For “Restarter” Rick talked to me about his idea for the front cover. He wanted something simple that would give a hint to what was coming on the inside of the album. The nice thing is that they know what they want when they approach me, so the process tends to be an easy one.

First reaction when hearing the music

Heavy. This record just hits you in face and keeps going. The title track mixed with the ideas that Steve had given me quite well and actually let me know that I was already on the right path. . The noisy end to that song made me think of the machine advancing onto unsuspecting cities. Sort of like the hammers in Pink Floyd’s “The Wall”.

Relationship to the music, lyrics and art

I really do take lyrics into mind when I work on a design. If they are an instrumental band, I take the mood, feeling, and even title into consideration. Sometimes I’ll have to talk with clients about the true meanings of their lyrics and songs and it all helps so much to be able to capture a visual inside my head. For instance, the main theme of the new Torche album was extermination of the human race.

I smoke a lot of weed. It may not be a ritual per se, but it helps to get the creative juices flowing and helps me to focus and ignore outside distraction. Getting my physical body ready is important, too, as I can be at the art table for endless hours. I sketch something completely random to loosen up before starting in on the main project.

One my favorite images on “Restarter” is the back cover image of the lilly being overtaken by machines and changed into something not so organic in nature. The death of the flower brings life to the machine and illustrating that in one image was important to me because I wanted those who looked at the image to be able to understand what is going on with the rest of the art. The overtaking of all living things.

When I started the cover, the album wasn’t titled yet. So I just relied on the ideas that Steve and Rick had provided from our phone conversations and that made it easy to whip up a story line that would fit what was intended. I also was able to listen to the music beforehand to get a sense of the mood that the wanted to be involved. I have meshed well with the Torche guys since I met them and the whole process of putting their ideas on paper has been on both sides.

I know my pens well. Each pen is marked with a different piece of tape to determine ware and the type of lines that that pen will make. I usually ink with anywhere from 2-5 pens in my drawing hand for quick access. I use Microns and Copic because I found that can work best with them on bristol. I’ve also been using primes marker to color in the pieces and have used them on previous pieces for the band Lesbian and a few others. For “Restarter” I used a local photographer to capture the image as opposed to scanning it. He stepped in and helped me out when a local business dropped the ball. Besides that, it was just me, Torche, and Orion Landau.

Band or label feedback to discuss

The one direction that Steve gave me was that the idea was that of the extermination of the human race. This was not going to be the rainbows and happiness of “Harmonicraft”, but was to have a darker feel to it. Rick and I had talked about the front cover as a preamble to what was going on in the inside and wanted to keep it simple. The final product might not “wow” the listeners immediately but once they open up the gatefold or the cd they soon understand that the view from inside of the house is just the start of the invasion.

I made sure to draw out my piece at 12.5″ x 24.5″ and had it professionally photographed and sent off the file to Orion Landau for the layout. Each one of the cover design were drawn and colored separately on 9″x 12″ sheets of paper and the center label was inked at the same size.