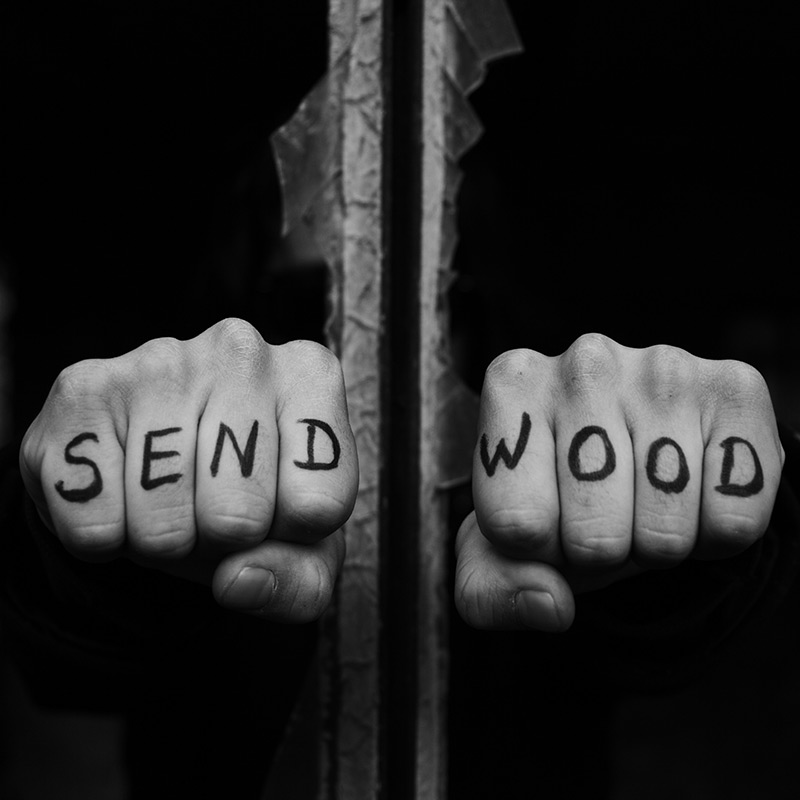 Guitar/drums combo from south of France, Sendwood is a metal rock duet, with a blues-punk attitude. With ‘Fist Leaf’, Sendwood first album, coming out in May 2018, the two musicians raw energy is set for one goal only, headbang. ‘Fist Leaf’ was recorded in 2 days, using only live takes. With only one guitar track and one drum set, we wanted to deliver our music in its rawest form. What you hear on this record is what happened in the studio, there are no tricks.

Being a duet is a big advantage in the creative process. It was not easy at first, we had to work it out in rehearsal but, eventually, we learned to master this formula. Usually, we jam some riffs, put them together and then work on the vocals and the lyrics. Then again, sometimes, we meet in rehearsal with an almost fully written song. There are no rules. Some songs took months to write, and some took half-an-hour.

Laure Alziary made the artwork on this album. She is a French photograph, and she’s very talented and a very good friend of ours. We didn’t give her any direction, except for the black and white concept. We wanted Laure to do her own thing and to take the band’s concept to a visual level. There are two of us. The music goes straight out, so the visuals must follow and be there to help it.

We listen to a lot of music, from very different kinds. Royal Blood, Nine Inch Nails, RATM, Helmet, Faith No More, all these are undoubtedly amongst the main influences we have. But many bands inspire us. Type O Negative, The Beatles, the Stooges, Pearl Jam, The Who, or even french bands such as Joe La Truite.

As a band and as individuals, we are not religious, but we respect everybody’s faith. Everyone should be allowed to think whatever they want and believe whatever they want. The problem often comes from dogmas and people telling other people how they should run their lives.

We believe in the sanctity of music. Art is the most spiritual experience there is, and it is not here to sell you something or to ask something from you. It is a spiritual journey into the mind made by humans, to interact with other humans.