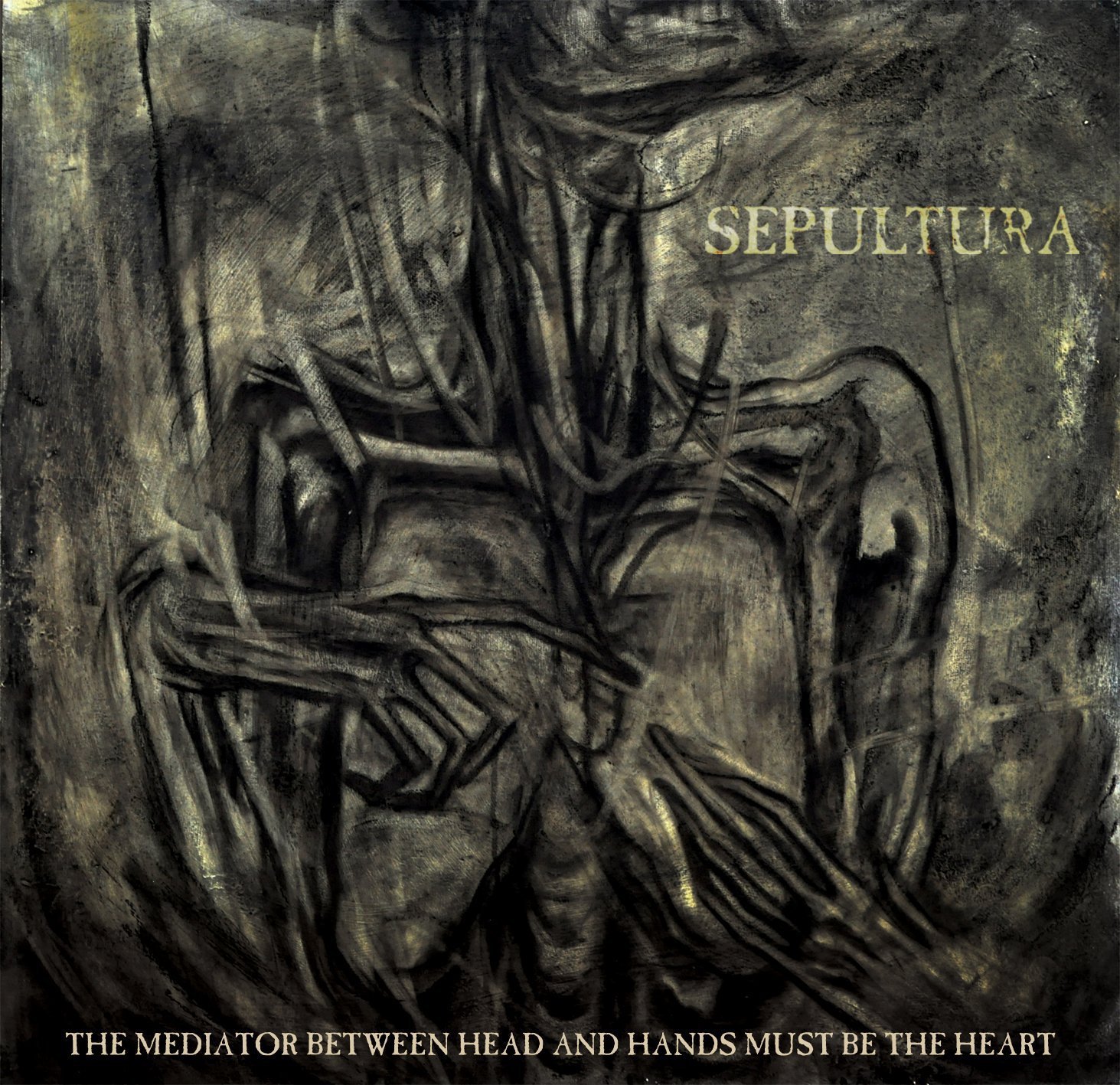 Moving on with the tradition

Sepultura is a band that needs no introduction. Hailing from Belo Horizonte, Brazil, they made their way into the metal scene with their mix of thrash/death/groove metal during the ’80s, and they are now celebrating their 30th anniversary with a World Tour. HMA had the pleasure of sitting down with Andreas Kisser and Derrick Green, before the band hit the stage in London, to discuss the crowds through the decades, family, and memories of Derrick’s audition.

Andreas Kisser: It’s going great. It’s an amazing time for us. It’s really had good momentum to celebrate 30 years. We’ve been on the road for two years now since the first show we did in São Paulo for the release of our last album ‘The Mediator Between Head and Hands Must Be the Heart.’ And the 30 year anniversary this year, playing all the big festivals in the world, went everywhere – I think four times in Europe. I’m very happy to be here in London to do this celebration as well.

HMA: Have you noticed any significant changes in the crowd over the years?

AK: Any changes in the crowd? They’re getting older!

HMA: And there are more people with their mobile phones out!

Derrick Green: There was somebody with an iPad in the front row and I was almost going to call them out. Then I was like, no that would be so cruel. But it was disturbing me. I was like, are you serious? You’re at a metal show with your goddamn iPad! Shameless!

AK: I have to say, our crowd is quite different. Of course, you have people filming certain songs and stuff, but most of the time they’re really just enjoying the show. It’s great.

HMA: Is there anything you’ve learned over the years about how metal music has evolved and where it is heading?

AK: I think Metal is the most popular style in the world. I mean that’s a fact. We’ve been in 75 countries over 30 years and everywhere you see a crowd, you see the black shirts; you see people that understand and know this music. And metal survives because it blends with other styles. We did with the Brazilian music; the United States mixed Rap with Country music; Scandinavian’s, they have another type of Metal. Through all the world, every type of instrument is being used for Metal, which is great. So I think that’s why it’s very diverse, with a lot of possibilities for Metal. And it’s something that goes through generations. It is really a family thing. You have your Black Sabbath albums that you’re going to leave to your kids, to your grandson. And that’s how it is with rock & roll and metal, but no other style. You see it in classical music and jazz a little bit, but not like rock. If you have, I don’t know, maybe ‘Machine Head’ from Deep Purple, that’s your most precious thing. You want to give that to your son. I think if you’ve seen a show like Iron Maiden or Black Sabbath or even Sepultura you see families going to the shows, which is great.

HMA: Let’s talk about the cover of your latest album ‘The Mediator’ by the artist Alexandre Wagner. Can you tell us more about it? How did you decide on this artwork?

AK: Well, Alexandre is a very unique artist in Brazil. He is from Belo Horizonte as well, from the same city that Sepultura is from. But he lives in São Paulo and was a suggestion from a friend that knew his work. I started talking to him about the concept that we had for the album, and he already had the painting. It was perfect. He just had to work our tribal “S” into it, and he did some other images that were composed for the booklet.

AK: Yeah, it is. He does like a bunch of layers and you get that kind of effect; it’s great.

HMA: So do you have a favourite album cover in general?

DG: There are so many. I mean it’s fascinating, seeing all of the covers from different bands over the years. The ideas behind them – they’re great to hear. But then Sepultura, I definitely have my favourite covers! I like all of them because I have a feeling about each one and, I don’t know, the timing and the memories that come about when I see them… But I really love – speaking about Sepultura’s cover art – I like ‘Mediator’ a lot.

But I also really like the Dante album that we did. It was special as well because (the other albums) they were all paintings and so it’s something that we’ve never done before. And another Brazilian artist, so it just really captured exactly what we were going for with the music and the art – it really matches very well I think. We’re very fortunate to have Stephan (Doitschinoff) who did that. And then we had the Nation album – there’s another artwork that I really like – which Shepard Fairey did. It’s just very powerful. They are completely different artists, and it was great that we were able to just switch like that and have something totally different. I think people look forward to seeing it or are always curious about what we’re going to do next.

HMA: What about a new album – are you working on it now? What can we expect?

AK: Expect the unexpected! A new album, if everything goes right, by the end of next year. But it’s still very early. We’re still working on riffs and ideas for songs, titles… it’s just very early in the process and there’s not really too much to talk about. But in February, after the tour is done this year, we’re going to have some time off. We’re going to regroup in São Paulo in our studio there and start really developing the ideas. And hopefully, if everything goes right, by October/November or so, we’re going to have a new album!

HMA: Will the song-writing follow the same process as usual?

AK: Who knows? Every album’s a different story. I write a lot all the time and have my portable studio… or even like on every portable phone you can record ideas and stuff. Eloy is writing some stuff; DG as well. Nowadays, it’s much easier to make demos. You do some sketches and stuff so you have something when you go to the practice room to start working. So that’s our process – we work as much as we can gathering some ideas, some loops and some cells and stuff, and then we go to the practice room and we try out and then we develop them into songs and everything you know.

HMA: Derrick; you joined the band almost 20 years ago, after Max left. It was a huge task but you managed to survive. What has been your best moment with the band so far?

DG: There are so many. I mean, I honestly think it’s just being able to come back after doing the audition. I went to Brazil… I was living in New York, and went to Brazil for two weeks and then I left and I didn’t know what was going to happen. But I think that feeling of getting a phone call, like, “hey, want to come back?”, because I was really dying to come back! I really fell in love going there and meeting everybody and I felt that it was just a great connection. I was like ‘I have to be here, it has to be me’ and it was such as shock, but at the same time, I knew that I was going to come back – or at least I wanted to deep down inside. But that was the most exciting time. I just knew then that everything was going to change. I’m open for change, you know, it’s like perfect timing.

HMA: And what’s your current view with world events; e.g. the terror attack in Paris? Do you think culture faces a possible demise?

DG: I think there’s been a demise for a long time, but at the same time the focus is on the demise so that’s what everyone’s really seeing. I think there are a lot of people who are doing, trying their hardest to do so many positive things in the world… but those aren’t popular in the media. So you don’t really get to see the hard work that people are doing, day-by-day; working with children, with organizations, trying to feed people. There are disasters happening all over the world. All this demise that’s happening is really taking the focus out of a lot of other things that are happening as well. I think it’s making people a little delirious, but I believe in humanity, as ignorant as it is at times. It seems throughout history it has these dips and these highs, so I believe there can be certain cycles that are happening and we just have to really stay strong and fight harder in fighting this ignorance!

AK: Oh yeah, we live there; all the good and the bad from Brazil for sure, yeah.

HMA: Andreas, you’re Brazilian with European roots… how important root to your music?

AK: I think important. You know, for a cradle. A place, where we come from some basic concepts, that help us to be what we are today. Even though I changed many of my concepts growing up learning about the world, meeting new people, finding different information about topics and stuff…I mean, that basic education was really fundamental for any one of us.

But I think family is the most important really – to have that kind of environment, away from politics or even religion or media and everything; a family environment that you can talk about anything. So that’s what it’s all about. I think Sepultura always had family support, 100%.  That’s why it was possible. Not only myself but Paulo, Max, Igor, Derrick as well, Eloy the same way, Jean who was in the band as well… The support of the family is really important from very early stages. Nation and flag and money – they change and we have to follow certain rules which we don’t agree to. So that’s how our roots, I think in the family, you have really a strong connection.