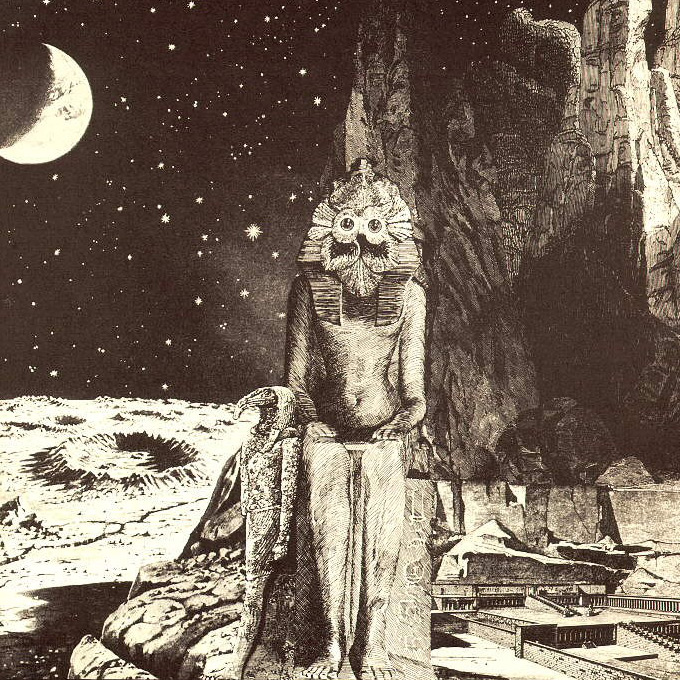 Set was one of the earliest Egyptian deities, a god of the night identified with the northern stars. In the earliest ages of Egypt this Prince of Darkness was well regarded. One persistant token of this regard is the Tcham scepter, having the stylized head and tail of Set. The Tcham scepter is frequently found in portraits of other other gods as a symbol of magical power. In some texts he is hailed as a source of strength, and in early paintings he is portrayed as bearer of a harpoon at the prow of the boat of Ra, warding off the serpent Apep. Yet the warlike and resolute nature of Set seems to have been regarded with ambivalence in Egyptian theology, and the portrayal of this Neter went through many changes over a period of nearly three thousand years. Pictures of a god bearing two heads, that of Set and his daylight brother Horus the Elder, may be compared to the oriental Yin/Yang symbol as a representation of the union of polarities. In time, the conflict between these two abstract principles came to be emphasized rather than their primal union.

Set’s battle with Horus the Elder grew from being a statement of the duality of day and night into an expression of the political conflict among the polytheistic priesthoods for control of the Egyptian theocracy. This was rewritten as a battle between Good and Evil after Egypt expelled the Hyskos in the 18th Dynasty. Some say the Hyskos were Asiatic invaders, and others say they were an indigenous minority that seized control of the nation. This tribe ruled Egypt for a time and happened to favor the Set cult, seeing a resemblence to a storm-god of their own pantheon.

The Set cult never recovered from this identification with the Hyskos. mages of Set were destroyed or defaced. By the time Greek historians visited Egypt, wild asses, pigs, and other beasts identified with the Set cult were driven off cliffs, hacked into pieces or otherwise slaughtered at annual celebrations in a spirit akin to the driving out of the Biblical scapegoat. The report of these historians is often thought to be a valid account of a a timeless and immutable theocracy , but just looking at the frequency with which the ruling capital moved to different cities (each being a cult-center) is enough to dispel this idea. One controversial Egyptologist has suggested that the worship of Set might have predated the concept of paternity. Later cults incorporating a father god would reject this fatherless son.

This introduces another bizarre factor in the transformation of the Night/Day battle between brothers into an inheritance dispute between Set and Horus the Younger. Any book on Egyptian myth you pick up contains the gory details of this cosmic lawsuit, which includes things that make DYNASTY look like a prayer breakfast. I have always been intrigued, though, that while all books affirm that Set tore Osiris to pieces, everybody knows about Osiris, and it is quite hard to collect the pieces of the puzzle that is Set. Egyptologists have never agreed what the animal used to symbolize Set actually is. Since the sages of ancient Egypt did not use an unrecognizable creature to represent any other major deity, we may guess that this is intentional, and points, like the Tcham sceptre, to an esoteric meaning.