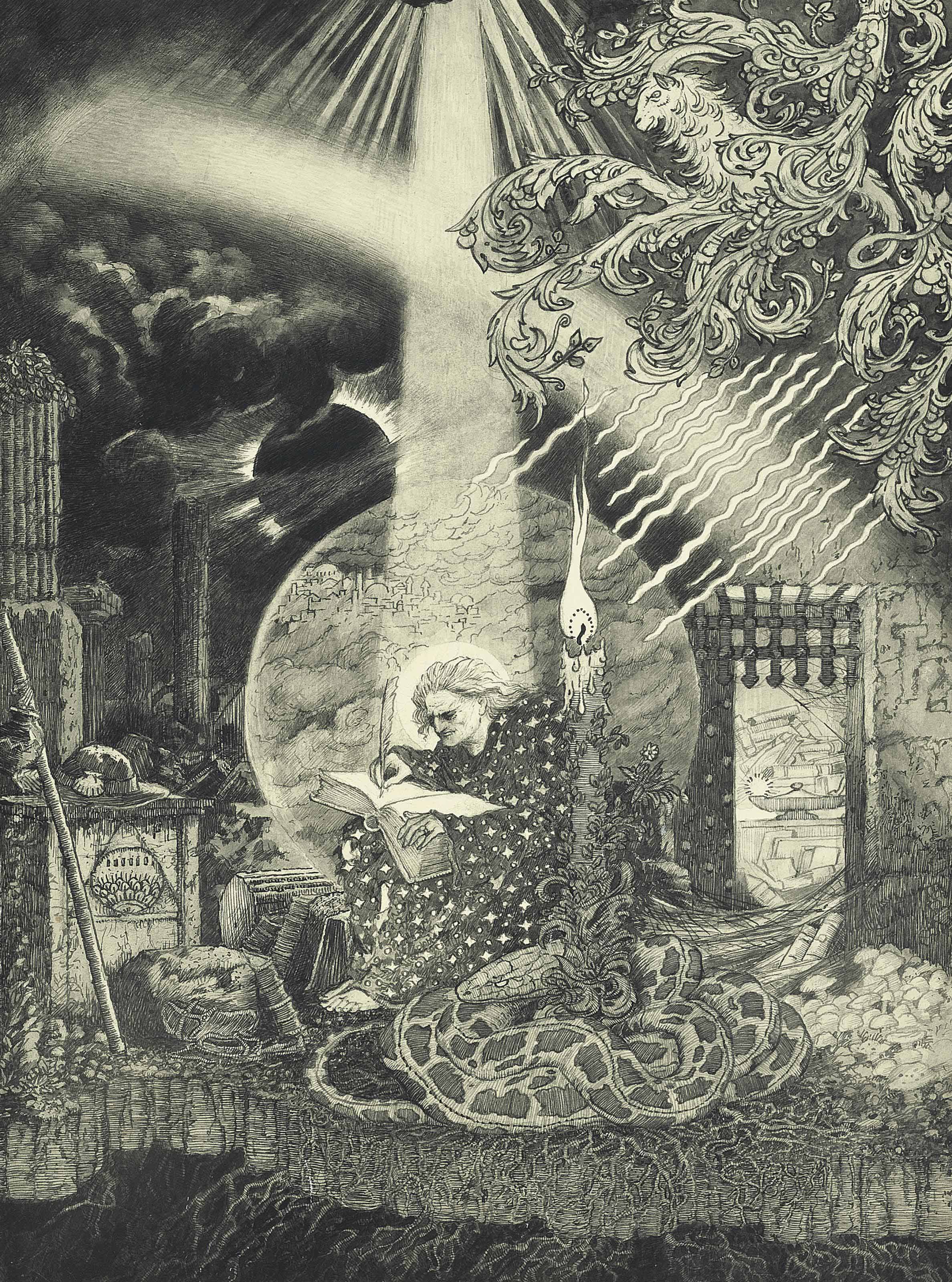 Sidney Sime (1867 – 22 May 1941, often SH Sime) was an English artist in the late Victorian and succeeding periods, mostly remembered for his fantastic and satirical artwork, especially his story illustrations for Irish author Lord Dunsany. Sime was born in Manchester in poverty. After a five-year career in the mines, including as a “scoop pusher,” work at a linen shop, a barbers, and as a signwriter (setting up in his own right), he studied at the Liverpool School of Art (later “College”, then joined the University of Liverpool in 1952). During his time at college, he won a South Kensington medal. He is sometimes called “the biggest thing to come out of Liverpool before the Beatles.” Romance Comes Down Out of Hilly Woodlands, illustration for “Poltarnees, Beholder of Ocean” in Lord Dunsany’s A Dreamer’s. Sime quickly became famous for drawings and illustrations with fantastic themes, with a presence in Pick-Me-Up, The Idler and the Pall Mall Gazette. The fantastic treatment often masked biting satire, especially aimed at the rich and at politicians. He received an inheritance after an uncle died and bought The Idler, but the business failed in under two years. In 1904, Sime was approached by the author for whom he is most often remembered, Irish aristocrat Lord Dunsany, to illustrate his first book, The Gods of Pegana, finally published in 1905. This began an association which lasted for the rest of his life, with his illustrations especially prominent in Dunsany’s earlier work (until c. 1922).

For one volume, at least some of the stories were inspired by Sime works (The Book of Wonder), and for three, in special limited editions, each plate of illustration was signed by both author and artist. Sime, who had produced a play with limited success in 1905, did both scenery and costume work for a number of productions, and had exhibitions in 1923 and 1927. In his later years, he produced less work but more in colour, his earlier work having been almost exclusively monochrome. Sime also contributed frontispieces to The Ghost Pirates by William Hope Hodgson and The House of Souls by Arthur Machen. Sime died in 1941, and his widow Mary preserved many of his remaining works, which on her death were willed to form the Sime Memorial Gallery, then and still in Worplesdon near Guildford.

Today, Sime is best remembered for his work with Lord Dunsany. At least four collections of Sime’s work have been published, though none are in print today. The quality of reproduction in these has been variable. Many reprint editions of Dunsany work omit the illustrations but some include them. As with the Sime collections, some publishers have produced high-quality reproductions but some have been very poor. Illustrator Roger Dean is among many who cite him as an influence. Writer H. P. Lovecraft was also a fan of his (mentioning the artist in the stories “Pickman’s Model” and “The Call of Cthulhu”) as was Howard de Walden. The Sime Gallery is still extant in the village of Worplesdon near Guildford but the most famous collections of Sime work belonged to Lord Dunsany and Howard de Walden. The latter is unavailable, and it is believed many were lost in a fire. However, the Dunsany collection, including all the originals of Sime’s work for Dunsany, plus a few other pieces, and notably with several in colour, can be viewed by arrangement at Dunsany Castle in County Meath, Ireland.