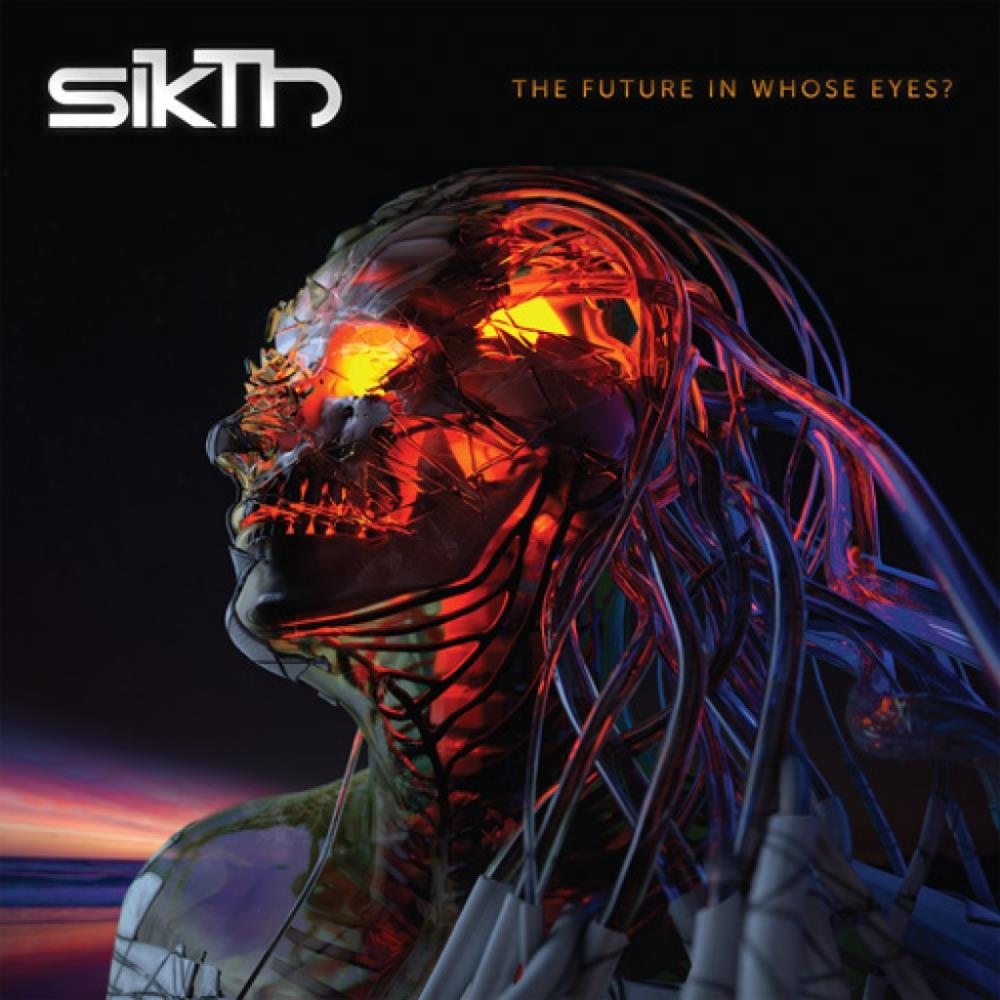 Sikth formed in 1999 in England and immediately became one of the most influential bands in the progressive and djent genre. Their music was innovative and without a doubt ahead of their time, and this gained them recognition, acknowledgement and respect between the prog-metal fans scene. The band started touring the world with big names and released two studio albums, in 2003 and 2006 before unexpectedly going on hiatus and splitting up in 2008. It wasn’t until summer 2013 that when they did a special live set at Download Festival, that they came back to light. Sikth fans, however, had to wait two more years until a new EP was released and a new album and tour announced. We caught up with Mikee Goodman during Camden Rocks Event to find out a bit more about the band and what the future holds for them.

HMA: Tell me about your latest record ‘The Future in who’s Eyes’ (2017, Millennium Night Records) ate there themes and concepts that you wanted to get across?

Mikee Goodman: We recorded it in the UK, a bunch of different studios. We spent about a year writing it. Yeah, we’re proud of it. We’ve not been able to play as much of it since as we’d like on tour, but we’re proud of it. We put a lot of work in. People will always say they prefer your old stuff when you’re a band that’s been around for years. I’m the same when I like my favourite bands, you know? It’s a little harder to get people to engage now, but I think people liked it. I think we liked it. We feel that we could do better. We always do. So we’ll probably make another record.

HMA: Do you feel the sound changed in any way with the new addition to the band, singer Joe Rossen and was Joe able to put his stamp on the creative process?

MG: Yeah. It’s different. Justin’s voice was very iconic. So it sounds like a different band to an extent. But Mikey’s voice is kind of the main thing people would recognise. So I guess because of that it’s still okay. But in a way, it’s improved the band because Joe has been able to enhance the band as a whole. He works well with Mikey. Just done it. Yeah the two of them bounce off each other well. So it’s been a lot of fun since. He’s still coming into it. With the next album, we’ll probably get him more involved creatively. He has a really good personality. He’s just a good laugh being on the road with Joe. He’s a funny guy.

HMA: How was recording the album after the long band hiatus and split?

MG: It felt like we’d never been away. It’s a cliché, but it’s true. Initially, when we first came back, it was kind of like, “Whoa this is crazy.” Because it was a bit of a bust, but now I can’t remember not doing it

HMA: Do you have any new material and are you planning and working on a new record?

MG: I don’t think we’ve got anything planned, but we thought about doing another album. So we probably will. There’s no reason to stop doing records full stop. As long as we can still write this kind of music, we’ll probably carry on. But it takes ages to write. It’ll take about a year to write it. It’ll be sometime in the next year, probably, if we do it.

HMA: Do you feel the pressure from the fans to write a new album soon?

MG: Yeah, a little bit I guess. Maybe if we were Coldplay or Metallica, it’d be different. With us, I mean, we’ve got the core fans that seem to stay with us, If they get bigger than great. As long as people don’t hate what we do, then we’re happy. Our records need to stand up when we look back on them. When our second came out, which is our most popular album; no one gave a shit, when it came out, we weren’t a buzz band anymore, and no one cared that much. But that album’s gone on to be quite influential. So it’s the same with this album. When it comes out, when the sixth album comes out now, it’s not a massively big deal. It just comes out. And our fans love it. And then it starts to get passed around. People play it to their mates, and you develop fans. It’s one of those bands. We’re one of those bands. I think in ten years, this current album will be even more popular. You know? I hope.

HMA: Your lyrics are insightful, heavy and intricate, what is the writing process and how important are lyrics for you in the all album?

MG: Yeah, one of the things that make us different to a lot of the other metal bands are Mikey’s vocals and his lyrics. They make the songs a bit more three dimensional. He can tell a story that’s not a story that any of us would have thought up. And it can make the songs feel a bit more cinematic. So it’s a vital part. A lot of the fans out there, especially in other countries, they really, Mikey’s lyrics are tattooed all over them. It’s a big deal for people. So he’s connected with some people. I think that, for a lyricist that must be the biggest compliment. I expect.

HMA: You have been mentioned between the highest influencer of the progressive (djent) genre with band such as Meshuggah, did you think that could happen and how does it feel for you?

MG: I appreciate the sentiment. It makes me proud. I guess. I think there’s a lot of bands that have come and gone and have not made any influence at all. So to be considered influential is an achievement.

HMA: Do you have people coming up to you going like, “I started playing the guitar because of your band”?

MG: Yeah, all the time. Every time we tour with a band, someone with the band will say something like that, or when I meet fans at shows. It’s hard to take that stuff in because you can’t see it from that perspective. Ultimately, I’m only ever satisfied with my own, if I reach my standards musically. So the fact that it’s been influential is nice, but it doesn’t go to my head or any of our heads. And this is a thing; still, you got to be realistic. Although it’s been influential around the world, it’s still in relatively a very small pond. You know? It’s not like… It’s been influential to a progressive metal scene, which is great and it’s not going to go away. And we’ve etched our little part of history, of which I’m proud of.

HMA: Which were and are your biggest musical influences and inspiration? When and how did you get into metal and what made you realised you wanted to be a musician?

MG: It was my uncle plays the guitar, and he has a little studio in his house. He got me a guitar. That was the beginning of it. And regarding influences, I learned from guitar books. I learned from the Black Album Metallica book, which was my all-time favourite metal record. And then I learned from Blood Sugar Sex Magic — Chilli Peppers. Machine Head, Burn My Eyes. I just became obsessed with learning how to play my favourite riffs. Pantera. That’s my era. And then some death metal. Like Morbid Angel. Big influence of ours. Yeah and Slayer. And just learning my favourite riffs. That’s how I started really. I think I’m that guy in that band who, everyone has that guy who’s the stubborn, driven one. We have a few in our band. But I was always like… Yeah, instantly thought I was going to be signed. All summer, I have that innate, a little bit of arrogance, but also a few heads in the clouds. You don’t think about what would happen if it fails.