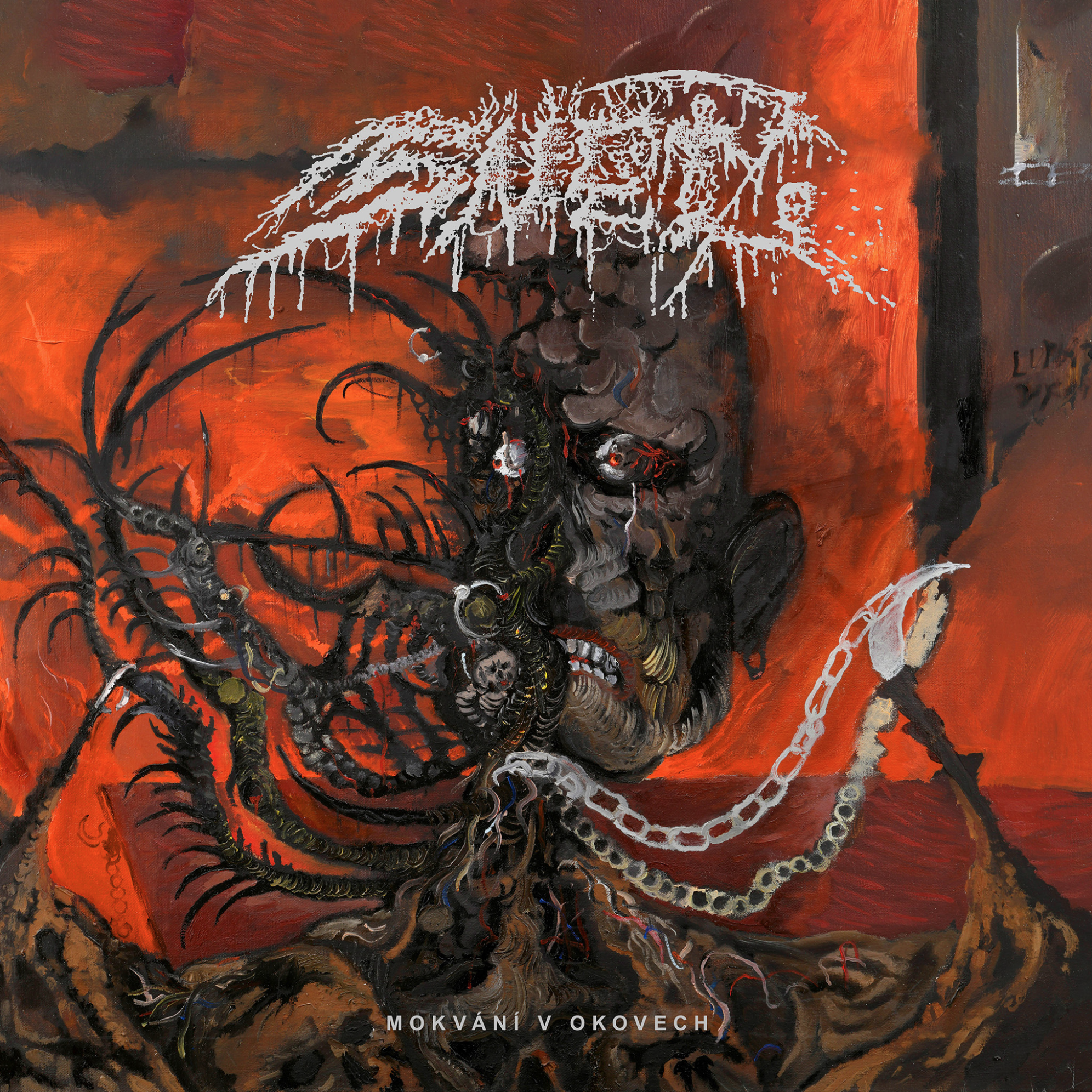 Řád Zdechlin: Hail from Prague! Sněť is a five-piece death metal band worshipping old ways of metal!  We know each other from the local gigs and bands. Ransolič and Hnisatel had dreamed about starting a new band together, and they are passionate about death metal like Autopsy and Undregang, Morbid Angel and so on. They hang out together in rehearsal and ask Kruthor from East Bohemia to play the drums with them. Kruthor is mainly known for playing bass in many bands, and he is also known for his cheerful parents and his rehearsal house in a village where we love to make a concentration camp for our new tracks.  Bass player Leproduktor is from South Bohemia, and he is grinding guitar in Kaosquad. The Leproduktor family is extremely into the metal scene, starting with their dad to an older brother and Leproduktors twin. I saw some old photos of metal army family members with long hair and metal shirts. Also, all-male members are into bodybuilding, so we have strong arms for pubs’ fights. As a the Řád Zdechlin, I was added to the band after they brainstormed who is the perfect maniac for the live shows and who has no problem making lyrics and representing the band in the frontman post. I was, and I’m still playing in a Prague based HC/punk band called Vole.

Everyone got their place in the band. Hnisatel and I are good in graphic designs and preparation of album covers, posters, promo materials. Ransolič is the mastermind of public relations, chatting with labels and searching for new opportunities. Kruthor is the driver of our “Hellbus” old red Volkswagen LT35 with windows all around and nine seats. Leproduktor is the master corrector of the songs, haha. Making riffs and compositions is all about being together; I can say we are a pretty democratic band.

HMA: The recording and writing must have been tricky with the restrictions.

Řád Zdechlin: Writing was tricky because the first plan recorded all the stuff earlier, and the plan was only 7’inch. Our drummer broke his leg at the beautiful party, where his friend stepped on his leg with a 3,5 profile. So we had to move the recording after his rehabilitation. Fortunately, we had more time to create more songs, and that was the formula to make an entire album instead. So I can say we are lucky that happened. Restrictions are that we cannot travel between regions, so we can’t play together because two members are from different parts of Czechia.

I don’t know if there were some funny parts. Recording takes more time than we count, which was worth it. But next time I will prefer to be there together all time and drink maybe less. Think is, the covid situation was not well taken by our government, so people around were confused as fuck. That’s the reason why people don’t care that much about restriction, and our country is number one in COVID worldwide. Thank you, prime minister!

Hnisatel: I remember one funny story from recording. It was a late night, we spent the whole day doing solos and adding some extra stuff, and we were stuck on some slide for like two hours. We were all drunk, and I got pissed off like Lars Ulrich, took my jacket and while I was fast opening the door from the studio to get out, I smashed my head with these iron doors. The next day I woke up with a hangover with a bump on my forehead like some stupid.

HMA: What is ‘Oozing in Shackles’?

Řád Zdechlin: “Oozing in Shackles” means, for me, when we were writing it, the world was and still is placed in a pandemic situation, and the whole planet is captured in timeless space, which makes people think about life differently than before. It could be an excellent chance to change thinking about negative stuff and redistribute our power to worthwhile projects. Songs are variations from the fantastic world to the entire look to society and human failures at all. We got a song about ghouls in your mind—a song about a new breed of humans, a song about ourselves and the universe around us. Ransolič will say the album’s name is the “Mokvání v okovech” because the artwork was the first, and we decided because of it, but I guess it was somewhere beside, and I can figure it out now.

HMA: And what does Sněť mean?

Řád Zdechlin: I’m 32 right now, and I started listening to metal, especially death metal, in elementary school. I like that ultra combination of brutally fast music with zombie topics, not-understandable singing (because I didn’t speak English that time), gore, and extreme album covers were breathtaking. There wasn’t a day I fell asleep with my Discman in bed – Cannibal Corpse Gore Obsessed playing. When I had the money I spent it on buying metal fanzine Spark, which gained me a lot of wisdom about the black/death genre. It was shocking that I found I could be my identity in boring school life in a small town. I was the only one in the whole school with long hair, and every day someone asked me to cut my hair. Resistance changed to my power, and I stayed myself until now! I still remember the Jehovah girl from our class putting her fingers into her ears when I played Hatched to the Head in music class.

Hnisatel: Well it’s a boring story; I have been listening to metal since my 13 years old due to my uncles 90s metal tapes and CDs. The way leads to death metal was step by step through thrash metal episode, hair metal possession, black metal etc. I got into a local metal scene about seven years ago when I joined Lezok and met Ransolič and my friend Kuba from university years. Especially Ransolič showed me abroad and Czech underground metal bands due to gigs that he with crew Kreas promoted. Three years ago, I joined Kreas too to be part of the metal happening here.

HMA: Have you had any events in your life that have influenced your creativity and made you who you are today?

Řád Zdechlin: As a small-town kid, I used to move between a few groups of people, something like boy scouts, techno gang, LARP nerds, metalheads and punks. I graduated from the Academy of Fine Arts in Prague four years ago. My life is mostly filled with creative actions. I’m a tattoo artist, painter, and graphic designer.

Hnisatel: Maybe not events, but I’m from an artist family, my mother is an illustrator, and my father is a photographer. My grandfather was an artist, and he played music too, and I think I inherited the music due to him.. he gave me a lot. I have had support from my family in music, art and graphic design, which is my work nowadays, and I’m really glad for it. In my years in art schools, I met many people from the punk and metal scenes with the same attitudes, and it also gave me a lot, not only lifelong friendships. Cool event? A month ago, I streamed a released show of a punk band Kurvy Češi (translated “Fucking Czechs”). Řád Zdechlin was also involved as a corpse, and the record was ripped out of his dead body.

HMA: What motivated and prompted you to move the music you do?

Řád Zdechlin: I was hit by a train a few years ago, that motivates me to live!

Řád Zdechlin: Years ago, I think it’s good to be stoned and a bit drunk. All my high school and University was a constant party. These days I prefer to be sober or few beers, drink and celebrate after. But I can say hallucinogens like LSD or bohemian psilocybin mushrooms are pretty good realised things from different perspectives, which can be mirrored in my creative part of life.

Hnisatel: Not much. I figured most of the stuff when I had like 5 minutes before going somewhere, so I grabbed a guitar, when I make time for composing, it often does not work so much. We fit together very well with Ransolič in songwriting, but it doesn’t mean that rest of the band is not involved. Reproduction always has great points in song structure, and Krutorr is a multi-instrumentalist, so many riffs come from his dirty hands.