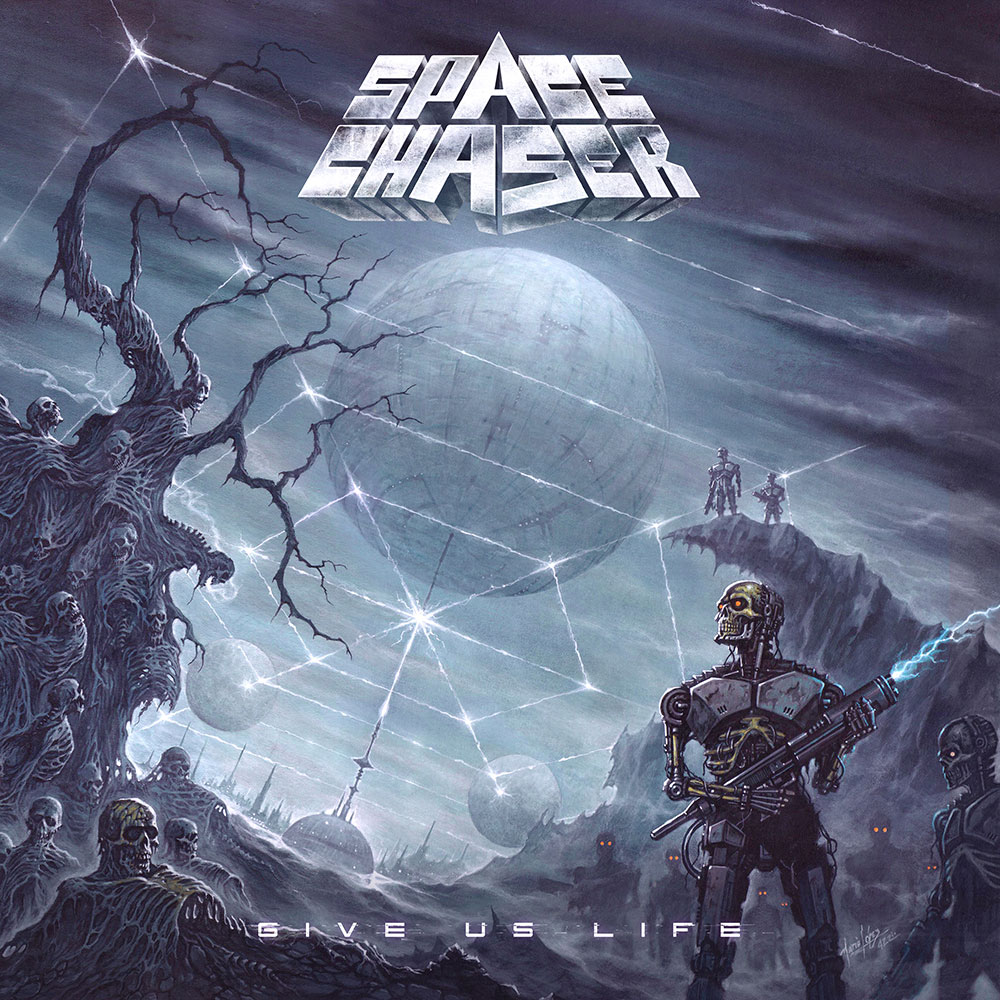 Give us Life with Space Chaser

‘Give us Life’ came together after we decided to scrap everything we had done so far and started from scratch again. Our goal was to create a mix between the old school thrash sound we grew up with and the more modern approach you hear from many younger bands nowadays. The thrash universe is very narrow, and we tried to incorporate some influences while still being 100% thrash metal. One of the biggest challenges we found was bringing brutal sounding riffs in traditional tuning.

The lyrics are predominately dystopian sci-fi stories. Mostly a bit more grounded in real-life physics, sometimes completely off the rails. Of course, you’ll also find the occasional party-like thrash themes, but overall you have those science fiction stories. It goes very well with aggressive and brutal music that can be perceived as cold and hard. Because in general, the universe isn’t much of a sentimental, loving place, and physics don’t care much about emotions and such. We like to think it’s a very fitting subject, and I can’t imagine one would be running out of subjects any time soon.

I would love to take the entire band to a remote place at one point to write an album together. But the reality now is that we collect ideas at home for a while, and suddenly, we find ourselves in the middle of writing a record. You see, for us, it’s a rather drawn-out process.

It’s probably like we are totally into science; it’s a rather pragmatic process. If something works, we just take it as is, but sometimes it needs a lot of experimenting and tweaking until it is completed. But I wouldn’t go as far as to call it a philosophy or anything. It feels good or rather alright because sometimes you want to make the listener feel uneasy, it’s going to be a part of us, and if we can’t make it feel right, we leave it for another time. That means oftentimes; we would demo a song as much as we can before we are satisfied.

When I was a kid, I saw the posters and t-shirts of my friends older brother. He was a prototype thrash kid. Tall, spindly, with tight jeans and long hair. And the noise that would come out of his bedroom was very intriguing. So I tried to remember the bands on his wall. I got some records but what did it for me was the (then) new Album of Slayer. South of Heaven. That was it. The morbid brutality of that album swallowed me whole. Funny enough, although I have been making music and even studied drums, I hadn’t had the urge as a musician to play that music until ten years ago.

Most music you will come across will be entertainment at best. But especially when you’re younger, you will come across a song, a record or probably a sound or a voice – whatever- that can change your life. No other form of art can carry emotions as good as music. If you have an intense moment that can stick with you forever every time you listen to that tune—for example, My first time in an aeroplane. I went to Florida; when we found ourselves over Tampa, the sun was going down. The country was already dark, but we were still in sunlight. And I don’t think I have ever seen something so gorgeous and I felt positively overwhelmed. Every time I listen back to that record that my minidisc device was playing that time now, I very well recall that incredible moment. I never found another art form that amplifies emotions as much as music. It helped me through some very dark periods.