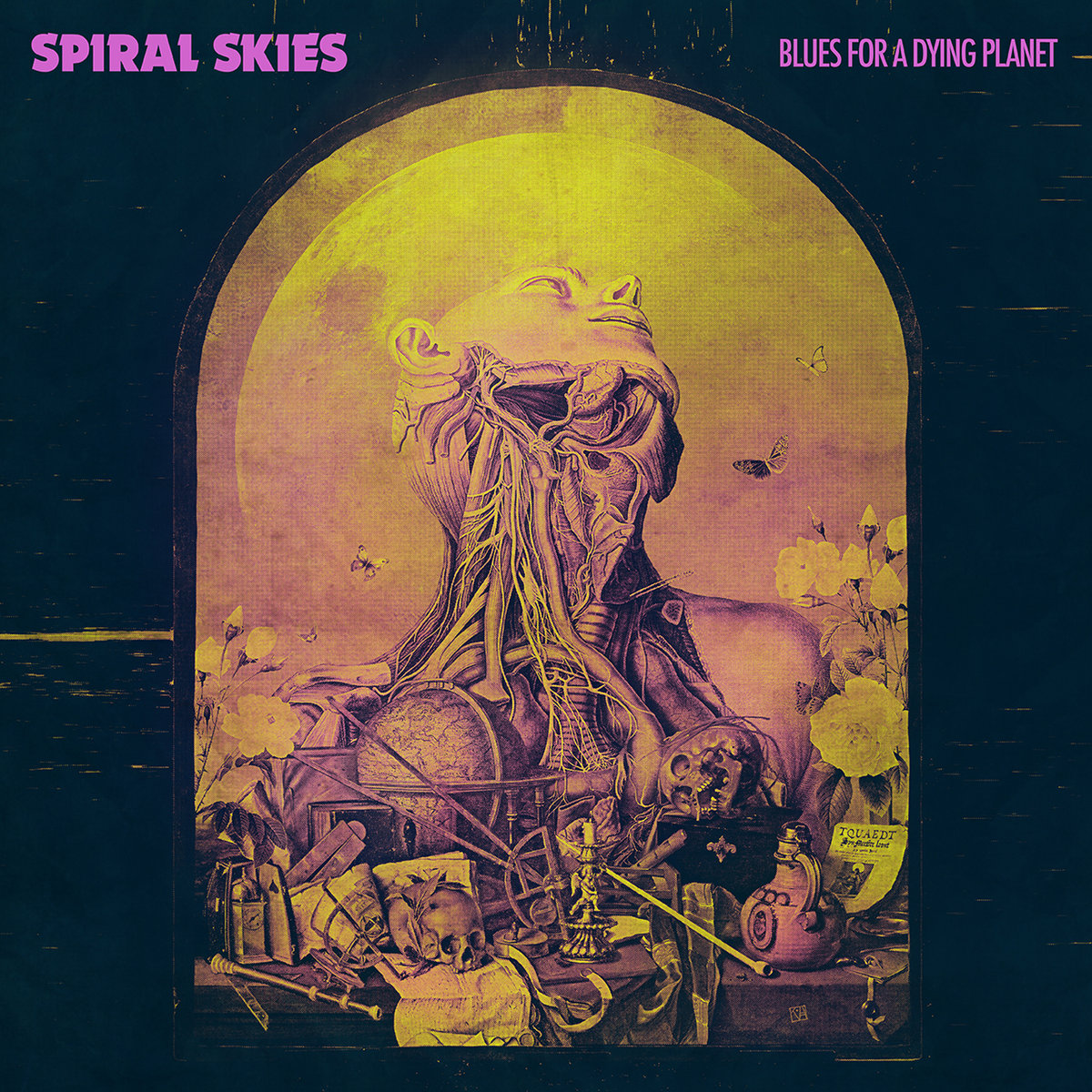 Blues For A Dying Planet By Dan Grim & Frida Eurenius

Spiral Skies was formed in Stockholm, Sweden 2014 after singer Frida joined the already existing quartett. The band shortly understood that they had something special cooking and boiling in their 70’s rock n roll stew, and after writing and jamming songs they created a sound that can most easily be described as “On Other Planets Kinda Rock”. Spiral Skies released their debut album ‘Blues for a Dying Planet’ thru AOP Records, in spring 2018. The album has received great Reviews, where listeners have drawn parallels to bands such as Jefferson Airplane, The Devil´s Blood, and Uriah Heep, to name a few. The debut album followed by numerous festivals and gigs, such as Sweden Rock Festival, and also as the opening act for High on Fire in Hungary.

It is our debut album and it’s called ‘Blues for A Dying Planet’. We joined forces with AOP Records last year and released it in May 2018. Some of the tracks were featured on our highly unknown limited EP called A Queendom to Come. The whole album is recorded and mixed in our rehearsal studio in Stockholm, with an analogue master done in Berlin, by Analogcut. Above this we are very glad about the outcome – and that so many listeners have gained interest in this small band called Spiral Skies.

The album itself contains nine songs, each one telling a story of its own. There are a lot, and with a lot, I mean a lot of time behind the songs. Changes came and went and we even changed the guitar melody that opens up ‘the prisoner’ when the record button blinked red when the final guitars were recorded. Even thou each song tells a story of its own they all are connected to a bigger picture. And that bigger picture is blues for a dying planet

We write all the stuff as a band – Spiral Skies. All of us are contributing in this manner, and almost every time we write the songs directly in the rehearsal room, by jamming. Most often Frida takes the songs back home and writes the melodies while Daniel and Frida write the lyrics. The recording process takes it time since we do all the stuff on our own. Bass player Eric is our sound engineer and he does a marvellous job. One funny thing about ‘shattered hopes’ is that it was called the Irish rover because it appeared during an acoustic workshop at Fridas country cabin. It had that typical Irish folk feel in the beginning. It took a lot of thinking and corrections to match the sound we all were going for. Another interesting story is the re-recording of ‘the wizard’s ball’, we were a bit confused if we even could create the same feeling as the song had on the ep. Sometimes a song feeling appears, does its magic and then closes the door and leave. I think we tried a lot of things to get back to that feeling, we even turned the lights off and had candles burning all over the place to get that spooky feeling haha!

We are influenced by space and time, and everything that is in between. No influences mentioned, no influences are forgotten. But of course, we watch movies and documentaries, listen to music and read books that make us inspired to turn a certain direction.