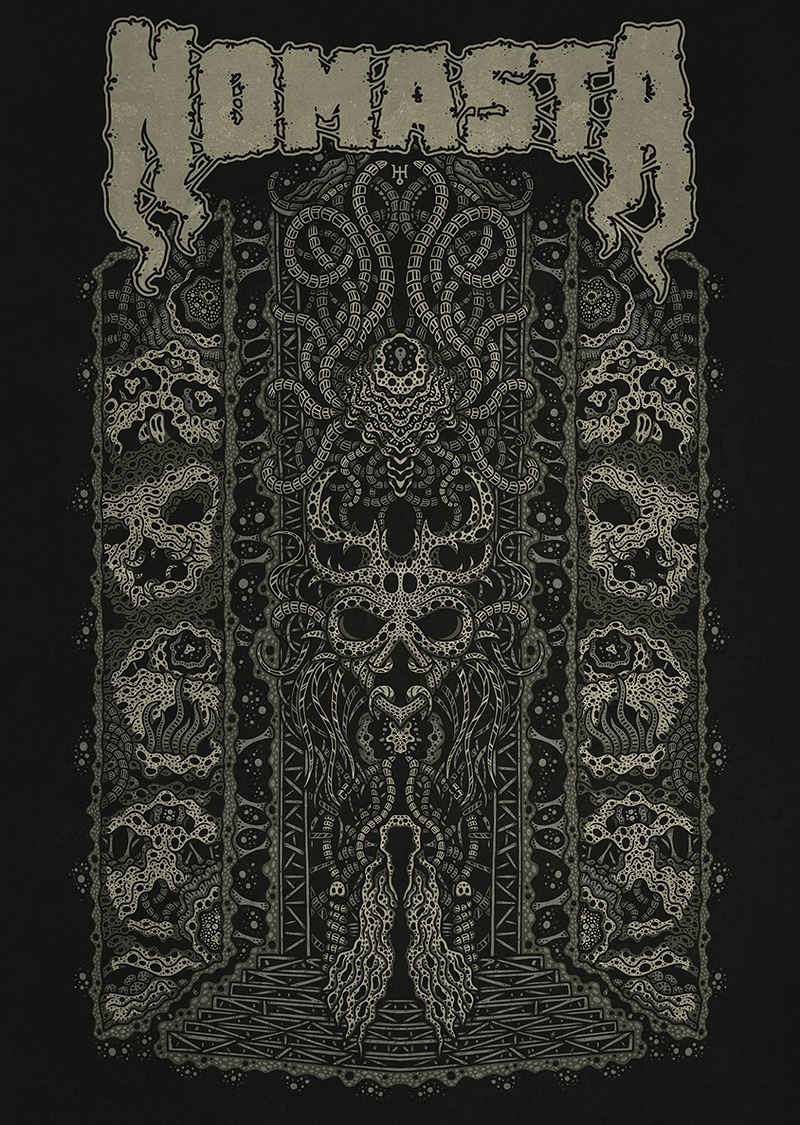 Steve Myles is an illustrator from Leeds UK, he co-runs the independent clothing label/art collective Pyre Climber with his girlfriend Natassia Wild and spends most of his time doing artwork for bands/playing drums.

HMA: The world of metal overflows with themes of the fantastical, fantasy, mythical and the supernatural, just the same as your art style. What can you tell me in this context?

Steve Myles: I suppose it all comes from whatever drew you towards doing artwork in the first place. I’ve had a fascination with grim art since being a nipper, my favourite films/characters/comics/books always had an underlying dark theme. Guess heavy music lends itself to this too, perhaps a lot of people who find catharsis in heavier types of music find the same sort of satisfaction in a darker palette/content.  I don’t know if it’s necessarily restricted to metal etc, there are plenty of bands that prefer to use darker artwork which don’t fall under that bracket, there’s darker electronic acts/hip hop squads who seem to prefer this visual style too.

Having spent a few years working for the local tattoo exposition I guess the clothing label draws a lot of inspiration from that world too. I like that themes re-appear and I find the progression from more traditional tattoo work to the modern counterparts really interesting. It’s amazing that two pieces of art which use the same elements have a completely different feel, for example a Whitby goth weekend style tee design vs a neo-traditional Slavic fantasy back piece, it’s all skulls and fire but I’d always prefer the aesthetic of the latter finding the former kind of cheesy.

HMA: Do you have a certain approach when working on a project?

SM: Seeing as most of my work is on a commission basis I try to start off with as much reference material as possible, not for the purpose of using it as a base but more to get a vague idea of what sort of aesthetic people are going for. As the years have gone on I’ve found that people are much more willing to just let me get to work which suites me fine. I find it a lot easier to get something that I’m happy with if I can work in my own style which kind of falls somewhere between dark fantasy and bold Charles Burns style illustrative stuff.

Having said this though I’m still pretty new to doing this full time, each time I feel like I’ve settled on a style it’ll usually get flipped on its head for the next project. Have recently got back into using colour which I swore off for a good few projects. It’s fun to look back through old work and figure out the things that have remained a constant and recognising the small trends you put on yourself before moving on to something else.

HMA: Can you name at least three creative principles that you have, perhaps as routine or as a philosophy?

SM: The main currency that I call upon is time and lots of it, being able to work at my own pace is really important as each design is pretty time consuming, have always been the most satisfied with what I’ve come up with when I’ve pushed myself to spend an extra few days putting another level of shading in etc. Lately I’ve been trying to spend a little more time on the planning stage, having said that though sometimes the best work comes from starting at the beginning and keeping on going until it’s finished. I suppose most artists hit a wall halfway through a project where they aren’t sure if it’s going to cut it. I’m gradually learning to just push through until the the piece is starting to take shape before making any massive decisions. Sometimes one more element will pull the whole thing together and if I’d ditched every design that I wasn’t feeling halfway through I’d probably have done half the work.

And the third would be to make sure that you have some real time where you won’t be disturbed, people are so accessible these days that I find working during the night is the best time to avoid getting distracted. Usually get myself setup with a cuppa, something interesting to listen to (music during the day and podcasts at night) and try to get to the position where 5/6 hrs have passed and you haven’t really noticed. Suppose it is a cliche but getting in the zone is integral.

HMA: If you ask yourself “why am I an artist?” or “why do I create”? What would be the answer?

SM: That’s a tough one, I suppose it’s just the place where I’ve felt the most comfortable, as a youngster I always struggled to concentrate and playing music/drawing were the two things that never felt hard to do. I wasn’t massively good at either (not to say that I am now) but clocking the results of a lot of time practicing and realising that you suck a little less than the last time you noticed is dead satisfying. I’ve had a lot of jobs over the years and only had my spare time to dedicate towards creativity, luckily I’ve put enough time in so that now it just about carries itself, can honestly say that going back to working in a normal environment wouldn’t really work for me. To an extent everyone has the ability to create in one capacity or another, it just depends on whether they have the willingness to do it or not. There isn’t really a right or wrong way to spend your time.

HMA: We all have our own take on art from both artists and those that just enjoy art. To you what is art?

SM: I guess art is what you make of it, there are people in the world that believe that dressing up in a pig mask and rolling around in their own shit is art, there are people that think that a great footballer is an artist, neither of these appeal to me but who am I to judge? Categorising what is and isn’t art is kind of tempting but should probably be avoided. I’m sure there would be a bunch of artists who don’t consider what I do to have any artistic merit but I guess I should care about their opinion as much as the pig mask guy cares about mine.

HMA: On your site we read “”They climbed onto the pyre themselves and stayed there, without uttering another sound, until the fire consumed them”. Who is it by and can you expand on this quote?

SM: Completely forgot that that was there to be honest! It was a quote that we found some time after we had named the clothing label that we used because it contained the name of the company. It was a while before we tracked down where it was from originally but it’s from an article about spiritualism in Haiti by Madison Smart Bell. The article is partially about how “The Haitians see the dead “sa nou pa we yo” or those we don’t see, how they do not depart as in other religions but remain extremely close to the living, invisible but tangible” and how this helps them to “laugh in the face of death”. The article is an interesting read (my own opinions on spirituality aside) but I can only really comment on why we chose the name that we did.

The name Pyre Climber comes from the idea that any pursuit leads to the same place, it doesn’t really matter how well/poorly you do or how far you go you are always just stepping closer to the end of the line. For me it’s a reminder to do things for the sake of doing them not just to get to the next level, it sounds kind of morose but I find it weirdly comforting.

Tickets for the festival priced at £30 along with the pre-show and bundles for the weekend are on sale now –   http://ritualfestival.bigcartel.com/