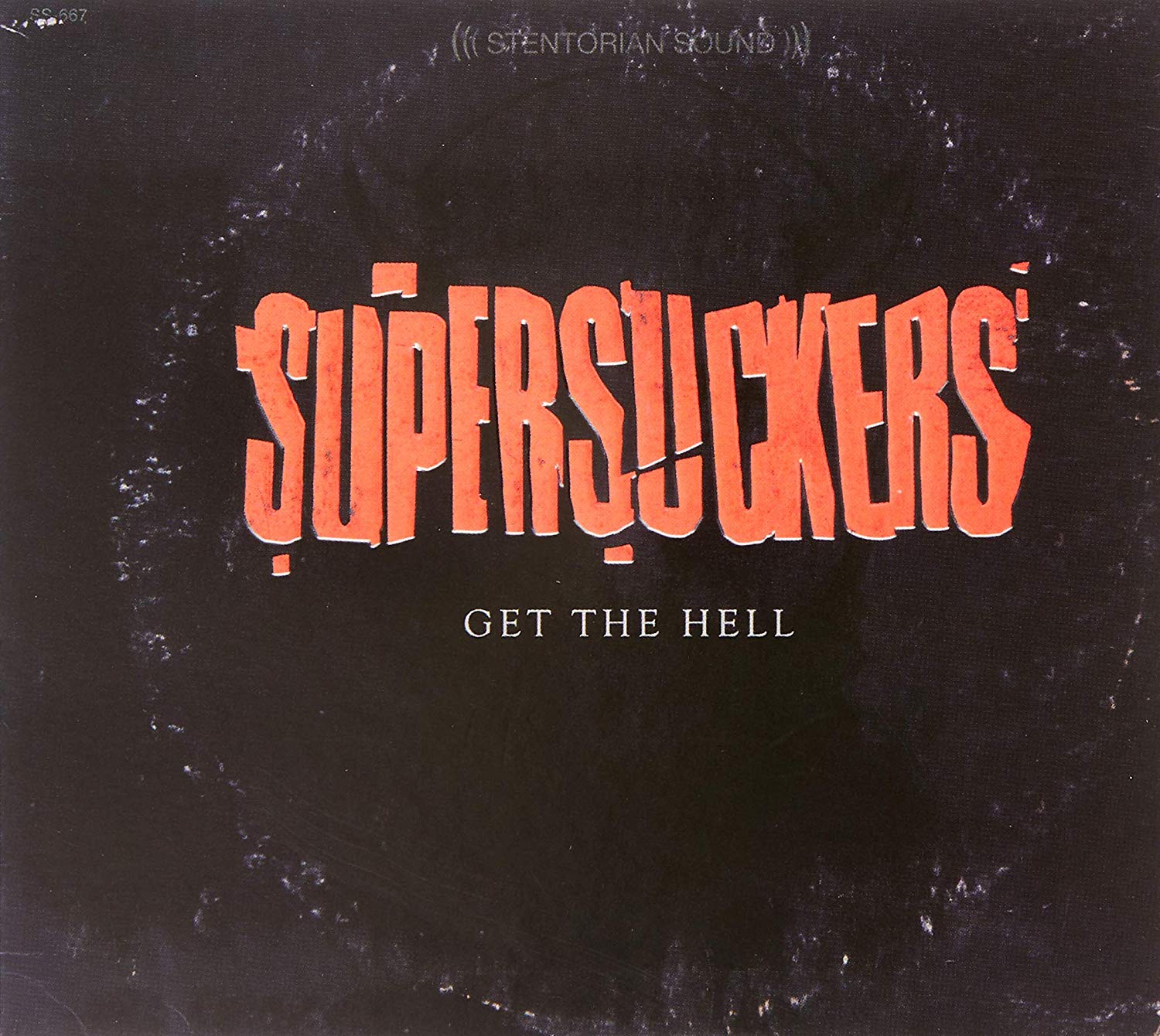 Spreading the evil powers of rock and roll

“If you don’t like the Supersuckers you don’t like rock and roll” Lemmy Kilmister. Can anyone argue with that? Self-declared –and rightly so- the best rock and roll band in the world The Supersuckers are back with their 9th studio album “Get the Hell” which is, without doubt, a valuable addition to their already impressive collection. Not many bands have managed to stay true to music like The Supersuckers, they are sacrilegious, they are raw and they are electric. I had the pleasure to meet up with my favourite cowboy and Supersuckers’ frontman Mr Eddie Spaghetti to discuss music, life, family, the desert and the revelation of a brand new record, which is already in the making.

HMA:  Tell me about your new record ‘Get the Hell”.

Supersuckers: Right on. Well, we’re really happy with the new record. We feel like we don’t have any business putting out a record this good this late in the game. We’ve been a band for so long and to put out a record that this awesome, now, it’s kind of phenomenal.

HMA: What is the creative process behind the lyrics and who writes the lyrics?

Supersuckers/Eddie Spaghetti: I write most of them.

HMA:  There is something I need to ask, is the song “Sleepy Vampire” about your wife, Jessika?

HMA:  I thought so, sweet and perfect, I love that song…and the song “Rubber biscuits” How did that happen?

ES: I didn’t write that song, that song is a cover. It’s an old song we learned from these Blues Brothers’ Records. They covered it from someone older than them. It’s a cover of a cover.

HMA:  I always thought it was the result of a drunken late night.

ES: Well, it was but we didn’t make that one up. That was a really hard song to get it right actually.

HMA: Most of Supersuckers’ songs are all about drugs and drinking. Are you guys still partying and is this lifestyle still part of the Supersuckers’ essence or now that you have families is it just about the lyrics?

ES: It’s definitely how we are. We’re older now so we’re smarter about it but from time to time…

HMA: Yeah, I totally understand, with time you learn and you choose your drugs, right?

HMA: How did you manage to maintain the balance between being famous but to never sell out and become huge dickheads rock stars?

ES: We would love to be dickheads rock stars, we would totally. We’re totally on board for that; it is just it hasn’t happened… we are forced to live with our latent life.

HMA: Listening to the Supersuckers brings you straight to the Arizona desert; it has that perfect sound that goes hand in hand with the colours and feel of the desert. How do you write that in wet and cold Seattle and yet still manage to communicate the perfect southern feeling?

ES: The only thing I really miss about the desert is when it did rain, the smell. It was … if you could bottle that smell you’d be a rich person because the smell of rain hitting the dry desert. I think there’s something about the dust that kicks up when the rain first hits, it smells so good.

HMA: Is there ever going to be another record like “Must have been high”?

ES: Actually that’s the next record we’re going to be making, we’re working on songs for that record right now.

HMA: That is so amazing. Talking about “Must have been high”, it’s my favorite hang over album. What’s your best hangover cure?

ES: Best cure for a hangover, there really isn’t one except a time or prescription drugs. Vicodin is the best cure. Yeah if you got some prescription pain killer of some sort it dies really help.

HMA: Is your solo project here to stay regardless of the Supersuckers?

ES: Yeah it’s still something I do. I’ve been busy with the Supersuckers all this year and it looks like next year too but it’s always something I’ll do.

HMA- Between the Supersuckers and your solo project you are so often on the road, how do you juggle that with your family life so well? Your family is so close, balanced and amazing.

ES: I give all the credit for that to my wife. She’s awesome, she’s a total rock and I owe her everything.

HMA: Your wife, Jessika, is a total rocker, a fox and a great mum. Being as kick-ass as she is, she has now published her first children book “Turkey and Mr. Bear” and it has also been promoted by Eddie Vedder and Willie Nelson, can you tell me more about the book?

ES: She got tired of reading our kids the same stories for bed every night. She decided to make one up one night and she kind of made up the story based on this big stuffed bear in our daughter’s bedroom whose name is Mr Bear. She made up the story about Turkey and Mr Bear and how Turkey wants to know, “Aren’t you excited about Thanksgiving?” and he doesn’t know what Thanksgiving is at all until the end when he realizes that it’s a celebration that Americans do were you eat Turkey. You can get it on Amazon, It’s a kid’s story but it has a dark finish.

HMA: Your son Quattro he’s growing up and he looks like a little punk rocker, how old is he now, 13?

HMA: Would you approve or disapprove if he starts playing in a band and if he wants to become a rock star? Would you advise him for or against that since you know the lifestyle so well?

ES: It depends on if he’s passionate about it, then I would be all for it. It’s just a matter of letting him find what he really is driven by and then supporting that and hopefully agreeing with the choice. Hopefully, he doesn’t all of a sudden think, I think I’m a great … I don’t know…

ES: Yeah, or I’m a computer analyst of all of a sudden! You basically just have to see some signs that that’s his gift.

Supersuckers: Yeah he does and he’s written some great songs already too. He definitely has it in him. It’s just a matter of how much it motivates him. I think he sees me do it enough to where he’s not as enamoured with the mystic of it as I was as a kid because there was nobody around me writing songs, making music and in a band. It’s something that I think he’s maybe a little bit desensitized too but it may be his calling. I don’t know, we’ll see.

HMA: If it is his call, would you agree with the rock and roll lifestyle that goes with being in a band? Like of course, the drugs, booze and girls?

ES: No, no, of course, I want him to remain completely untouched with that, completely pure. The longer it takes to get involved in that action, the more comfortable I’ll be for sure. The last thing I want him to do is to get somebody pregnant, which would be the worst.

ES: The best advice I’ve ever got? I don’t think I’ve ever really gotten any good advice from anybody. My wife gives me good advice, now of course. Don’t get fat, which is probably the best advice I’ve gotten. Don’t get fat is a big one. Yes because you don’t want to be a fat person and especially in my job, you don’t want to watch a fat person on stage, It should be avoided, yeah, nobody wants to see a fat guy.

HMA: And the best advice to your sons and daughters?

ES: My advice is don’t get pregnant or don’t get anyone pregnant. That’s the biggest thing that can totally fuck up your youth.

ES: It is. My biggest fear is being a grandfather before I’m ready to. I definitely don’t want that on my resume yet and I don’t want for them before they’re ready for it. It should be a decision that they make to do, not something that happens to them.

HMA: Getting back to music. If you could choose three or four bands to play with, dead or alive who would you choose.

HMA: What are your top three favourite bands, artist of all times?

ES: My three favourite bands of all time are probably AC/DC, Motörhead and the Ramones.

HMA:  What about new bands, do you listen to any new bands?

ES: No they all suck. I listen to new records by bands that have been around for a while though. Like the Dwarves have a great new record. Hell Bound Glory is this great band that we just travelled with not too long ago and did I mention the Dwarves?

HMA: You did actually tour with the Dwarves years ago or am I wrong?

HMA: Wow that would have been amazing to see.

ES: We did a tour of Europe with them; it was our very first tour. You were probably a baby.

HMA: Okay, we’re done. Thank you so much, can’t wait for the show and looking forward to the new record and to see you guys again live real soon