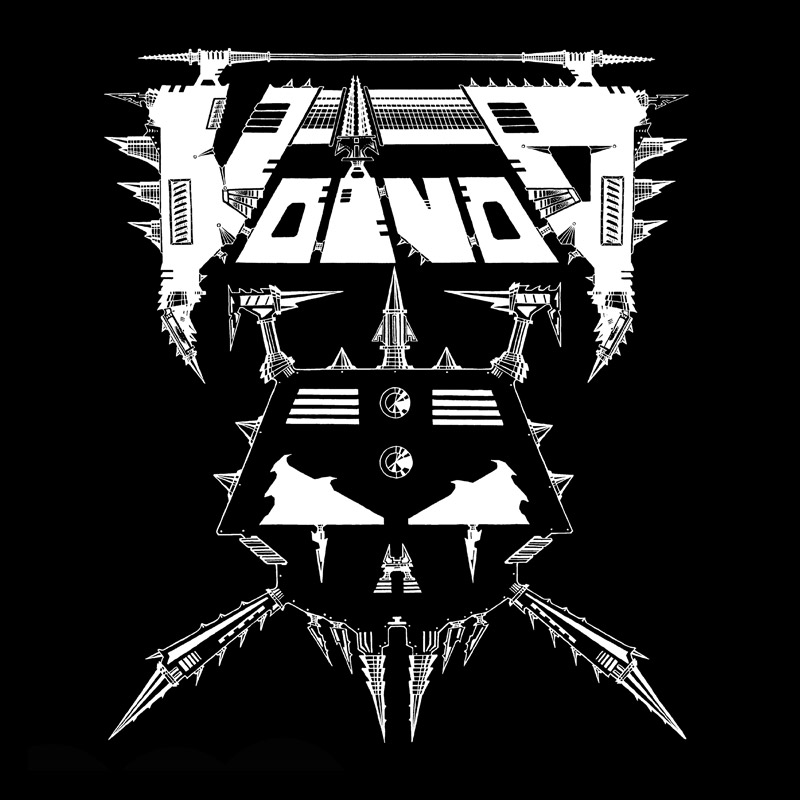 Since 1982 when they formed in Jonquiere, Quebec legendary Canadian metallers Voivod have always been a band that has pushed the boundaries of metal music into new grounds, always moving, always exploring and constantly evolving. Creating something more than music, but a whole concept, an entire Voivod World filled with visions of science fiction, cyberpunk and horror themes which flow and permeate the music, the lyrics and the artwork. We met up with founding member, drummer and artist Michael ‘Away’ Langevin during the Dead Dawn tour with Entombed AD to talk about his art creations, the Voivod world and the possibility of a long-awaited new album in 2017.

HMA: Your latest full-length album ‘Target Earth’ came out in 2013 followed by a split EP with At the Gates, do you have any new material and are you writing a new album?

Michael ‘Away’ Langevin: Well, when Target Earth came out in 2013 we we’re going to do a world tour and Snake was taken ill and he had to get an operation, and so the year 2013 was very slow we did a few festivals in Europe but no tours. Then when he came back in 2014 we were starting to have problems dealing with Blacky, and so the year 2015 was pretty slow as well. We went to South America and Asia. But we had different opinions on how the band should be managed with Blacky, he wanted to the band to be self-managed, DIY but we didn’t agree on that so we had to part ways. Now he’s more of an activist for Greenpeace than a musician I think although he has a project called Landscape of energies. So about the new material, since the Deathcrusher tour, we played quite a lot of shows and trying to write on the bus as much as possible. So right now there are maybe three or four songs in the works and I’m sure next year they will be a full album and a tour. We’re trying to write a concept album right now, so this winter we will work a lot in Montreal. Maybe we’ll tour before the album comes out, probably starting in the spring next year. At this point, we have no idea for a date of a release or anything like that because we are still right in the middle of writing the album. We’re lucky that we can take time off and write and be independent,  we have a loyal following, we can tour without having an album out but we can’t really be lazy about it because that’s our way of making a living, we have to become a bit disciplined sometimes.

HMA: Can you tell me about your art? How did you start painting?

ML: I only did four canvas paintings and they were the first four Voivod albums. Then since I have no training in art I decided to go digital around the mid-80s, and it’s been easier for me. Just one painting back then would take me four or five months so digital it’s much quicker. So it looks different, I mean people ask me to do paintings all the time for the next album but it would be hard for me.

HMA: When you are creating the band artwork do you get directions from the rest of the band too regarding the direction the artwork should go or is it entirely your choice?

ML: Sometimes there are inputs from discussions amongst us and sometimes it comes from the music as well that influences me. They lyrics – it’s all a combination of everything. So it’s collaboration.

HMA: Do you work on your art regularly when you’re not on the road?

ML: When I’m not on the road I do lots of shirt designs for the bands, I also do book covers, mainly books about metal, I doodle lots of logos, not only for metal bands but also hip-hop and all types. Lots of tattoo designs also. Yeah, so I spend my time at my place doing art which is great. On the road I do ink, it’s always useful for booklets – city booklets. And I do also commission art, ink on the canvas. Yeah, I do a lot of that, 8×10 and 10×15, 12×18.

HMA: When did you start with your art, did it came at the same time as music?

ML: Art was a lot before music. Maybe when I was 4 or 5 there was a cartoon on TV called Atom Ant and it was a manga. That was in maybe ’67, ’68. I drew him and I never stopped after. The ‘Negatron’ cover was an homage to Atom Ant with the atomic metal ant. So from when I was very young and then as a teenager around ’76 or so I just discovered a magazine called Heavy Metal. So I became obsessed with Moebius, and I wanted to become an artist for that magazine so I created the Voivod world. This was in the 70s and when we formed the band I started to talk about that concept with the guys, the Voivod world so they were really interested in looking at it musically, so we did it through the 80s. The Voivod world concept was based on Dracula, the book, and Lord of the Rings, and a magazine called Omni a scientific magazine and the magazine Heavy Metal.

HMA: Voivod’s lyrics are permeated with science fiction and space visions, where do you get the inspiration for that?

ML: When I saw the first Alien movie my art changed a lot and the movie Eraserhead also changed my visuals. Pink Floyd’s The Wall had a strong impact on me and then I saw a documentary called “If You Love This Planet” about nuclear weapons in 1980 and that also really influenced me. There was a TV movie called “The Day After” about nuclear devastation and had a strong impact. Then came the cyberpunk movies, Mad Max and Blade Runner. That’s where the concept evolved into something else. That helped me a lot with the concept at the beginning. There’s always a new movie that will impress me visually but many times it’s a remake like Tron. Sometimes the movies are very simple. One I think is called Moon, it’s just Moon. It’s the son of David Bowie who did it, and it’s really amazing. Then again it reminds me of 2001, it’s very slow, the designs are perfect, but that’s a great movie. I also like the remakes of The Planet of the Apes. Quite often I will go to the cinema but it’s to have the 3D glasses for the new Avengers movie, in the latest Mad Max also, we had 3D glasses.

HMA: Voivod has been around for enough time to see the music business change especially with the advent of social media’s, do you think that it is an improvement and makes it easier for bands to get out there?

ML: Well, of course, it’s very different and when we had to ship cassettes and small fanzines and wait six weeks for an answer and now it’s instant. Now you send them a message on Facebook and it comes back immediately. The main change, I used to ship my paintings to LA or Berlin and now I use wetransfer.com so the promotional tools are amazing. Also yeah, a lot easier on a promotional level. It might be a bit more difficult for newer bands as there are so many bands promoting themselves, but for an established band it’s quite a fantastic tool as the main goal when you start is to reach as many people as you can and to make sure that as many people as possible are aware of what you are doing. So it’s there, so you better use it. Some people say “I prefer to stay underground and not use Facebook” Suit yourself, you can stay underground forever. So that’s my vision of it, of course, they were many talks about piracy but back then people were taping vinyl. If I had one point to complain about it would be the streaming aspect of the internet. But the rest of the infrastructure is pretty good; I’m impressed when I see my statements of how many people download mp3s legally. It shows on the statement, it’s pretty interesting. It’s easier for people and more convenient to directly go to iTunes and back then you could find mp3s on blogs but then you can get viruses.

HMA: I have one more question for you, 2016 has been a crazy year, from music losses (Bowie, Prince, Lemmy) to the dramatic conclusion and raise of Trump to power, do you think that it is the beginning of a new dark era?

ML: It all seems like we are trapped the Planet of the Apes and Back to the Future. But there is a lot of information but there is a lot of disinformation, it’s really hard to find a line about everything. There is definitely a feeling of the planet going crazy. But it’s also because of the overflow of information. It’s definitely going on an accelerated pace and it’s very good material for songs and  It’s almost reoccurred in a sense that we used to talk about Chernobyl, now we can talk about Fukushima, we used to talk about the ozone layer and now it’s global warming and so on. I think maybe that’s why many kids our age are into thrash metal because we used to talk about the destruction of the earth a lot. You know it’s like a reoccurring nightmare. Well, could be. Supposedly they did fix the ozone layer but in terms of weather changes and global warming, I don’t know. Politic also has divided many people on this planet right now, but in the end, I’d tell you not to think about it too much.