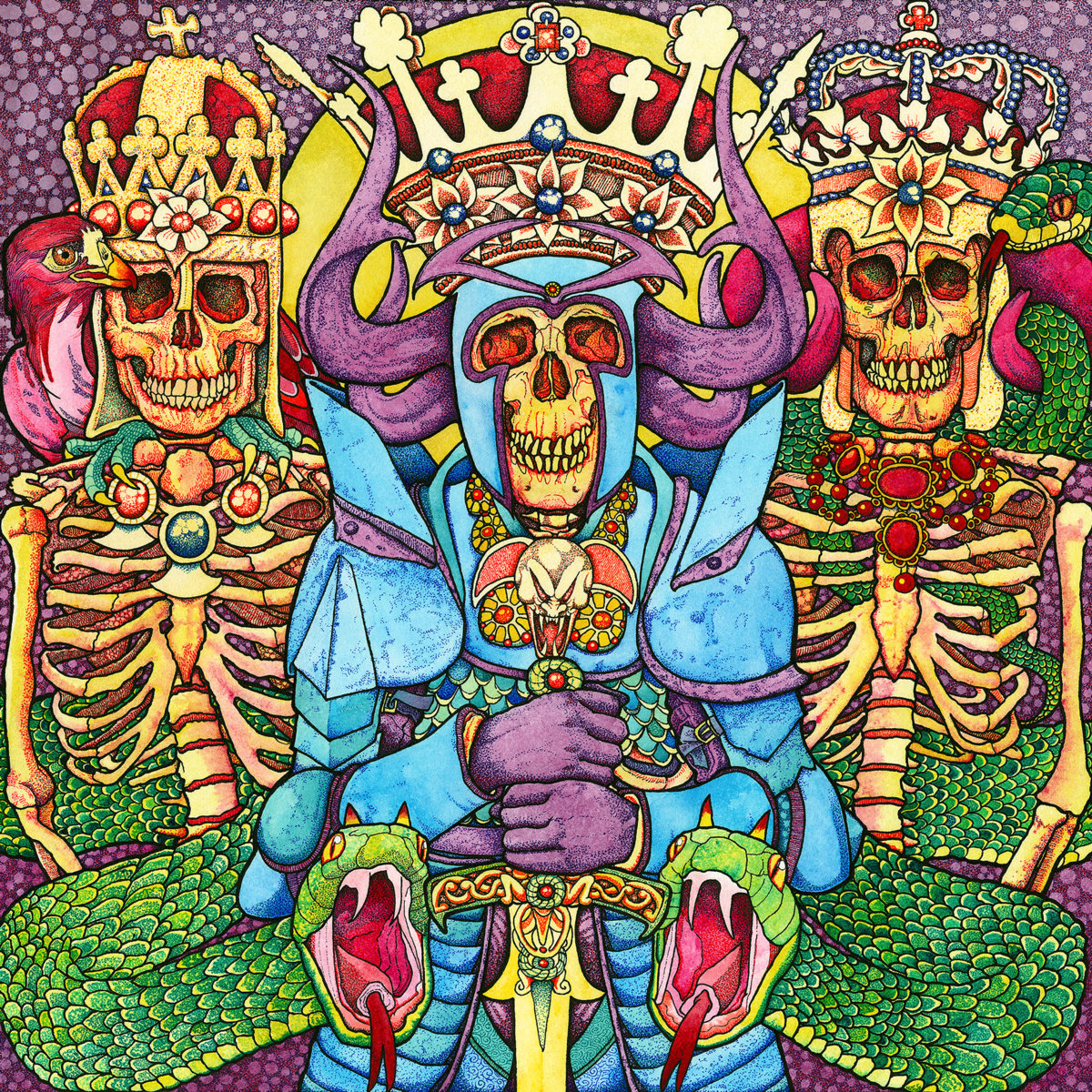 The Silent Bell Toll with Terminus

The Terminus musical style has changed over the years as all members have grown older and matured, i.e. entered their mid to late twenties. With the new release, the majority of the album has its toes in Doom and Rock with lyrical content that evokes empathy towards anxiety and death while still trying to maintain a ‘galloping on your steed through life’ feeling.

All of our album covers are made in house! I hand draw and watercolour all of our covers for as long as we have been together. This time around, the album artwork was completed before the music was. It was fun to think about the album cover while writing the music. Power dynamics, skeletons, and celebrating a Retro-Aesthetic all have a place within the concept of the artwork and how we go about metal in the modern age.

I’m not trying to sound crass here, but I usually realise I am asking is, ‘Am I bored?’ or ‘How do I get excited again?’ Our songs usually start on a guitar or a guitar, thinking about what the drums are doing. This mindset is often unhealthy in how it causes you to judge yourself but has still led us down some interesting paths creatively.

Modern metal should be competently arranged in a fundamentally exciting and composed way that is triumphant, glorious, and unapologetic in the way it conveys emotion, whether that be melancholy, sadness, or joy.

Do I have a favourite album cover from other bands? That is a difficult question, so I will list a few of the covers that inspire me:

1. Anything Roger Dean has done for the band YES but specifically the Classic Yes cover.

2. The Sword, Age of Winters, album cover by Conrad Keely, was fascinating and helped me get into metal music. When I was about twelve years old, the album came out, and I have not put it down since.

3. All album covers by the Mars Volta are absolutely mysterious and compelling and have helped deepen the mystery of what being in a band means in the 21st century.

4. John Dyer Baizley does beautiful work with his band Baroness, the benchmark two for me being the Red and Blue album covers.

5. Sean Reynolds did a fantastic job with the Pallbearer album, Sorrow and Extinction, which came out of my home state of Arkansas that I regularly console. The artworks motifs like the broken boat and inspiration of death are conveyed beautifully in an interview Sean did on ‘Behind-The-Brush’ for the page Invisible Oranges.

I am currently reading Idylls of the King by Alfred Lord Tennyson, which is essentially a collection of poems chronicling the era of King Arthur. I found this work by visiting The Chicago Art Institute and coming across a painting titled ‘Elaine.’ In the painting, we see a woman who has died of a broken heart because she was rejected by Lancelot and is pictured lying on her funeral boat being steered by a very mournful yet stoic oarsman to Camelot. I got goosebumps looking at this painting and just had to look into the story more.

The lyrics are based around perseverance but usually diverge into weird feelings and melancholy that we experience every day.