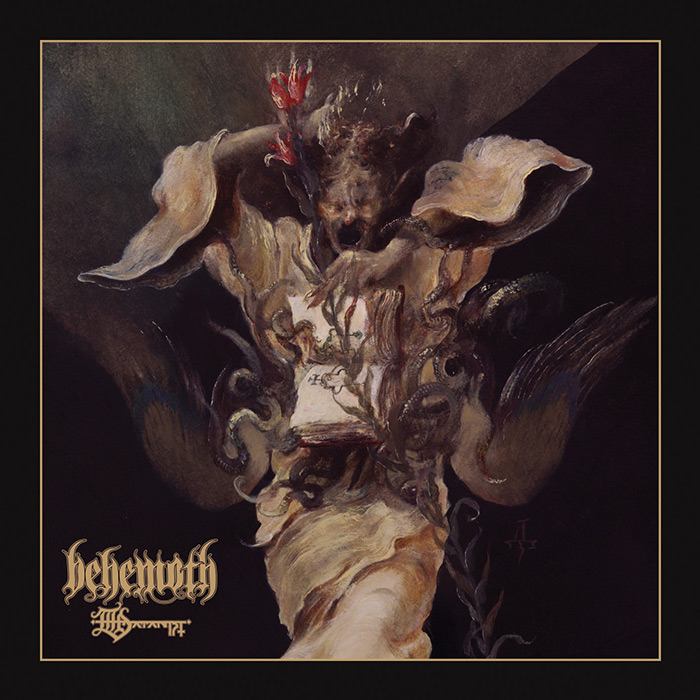 Cover artist: Denis Forkas
From the amazing album artwork to sinister and anthemic songwriting this record will become a black metal classic to future generations. In my humble opinion ‘The Satanist’ will be remembered as a milestone of black metal and it stands side by side with Venom’s ‘Black Metal’. I just checked my most played songs in Spotify and ‘Ora Pro Nobis Lucifer’ was holding no. 1 position. If you ask the most played song from the cd-player of my car it would have the exact same answer

Cover artist: Mark Wilkinson
No sign of retiring from my all time favourite band. They are still in great shape. Despite the fact I truly miss K.K. this still is recognizable and unique Judas Priest album and has great moments, especially ‘Halls of Valhalla’, ‘March of the Damned’ and ‘Battle Cry’ which are the sharpest moments from the Metal Gods. Judas Priest is well known to headhunt excellent talents as a replacements to original members such as the three R’s Richie, Ripper and Rob!

The 2008 concept album, Nostradamus, was not Judas Priest’s finest hour. Thankfully this iconic British metal band has returned to form with 2014 offering, Redeemer of Souls, and its blazing metal anthems. ‘Crossfire’ is one of the more outstanding songs on the record due to its blues-rock sound while ‘Halls of Valhalla’ and ‘Dragonaut’ are typical Priest, with the key ingredients of pounding drums, Halford’s undiminished vocal talents and soaring, screeching guitars.

Cover artist: Seth Siro Anton
Even the album title ‘Titan’ is an absolute killer! This album has a bit more the symphonic taste than their previous ones but that only makes it better. Listen to epic ‘Order of Dracul’, super aggressive ‘Burn’ and Godzilla-like ‘Prototype’ to understand why this album needs to be in this list.

Cover artist: Chrigel Glanzmann
Origins, by Eluveitie, is undeniably my favourite album of 2014. Not for nothing did Metal Hammer’s Björn Springorum call it ‘their strongest album to date’. There are 12 full-blooded songs and 4 smaller pieces (intro/outro etc.) with the strongest songs being tour de force, ‘The Nameless’, ‘From Darkness’ and ‘King’, a song which will make you wish you could do the melodic death metal growl. The lyrics are inspired by the mythology and culture of the Ancient Gauls and the blend of styles – folk and death metal – is, as always, thrilling to hear. Can’t wait to see what the band does next.

Insomnium – Shadows of the Dying Sun

Cover artist: Wille Naukkarinen
Insomnium has this innate ability to create music of superlative beauty, power and melancholy, and they have used this ability to great effect on their latest album, Shadows of the Dying Sun. The band’s 5th studio album once again boasts that winning combination of stunning melodies, insane guitar and Sevanen’s subterranean growl. Outstanding songs include While We Sleep, The River and epic title track, Shadows of the Dying Sun. Insomnium have truly perfected their sound and this album is sure to make fans very, very happy.

At The Gates – At War With Reality

Cover artist: Costin Chioureanu
At The Gates’ ‘At War With Reality’ lived up to the all expectations and hyper hype and triumphantly became a deserving follow-up of their legendary 1996 recording “Slaughter Of The Soul.” Surely, its overall to-the-point ferocity, lyrical intricacy and tight songwriting it’s not as revolutionary as it would have been if released 15 years ago. But, its poignancy should reside in being a powerful coming-back that brings from the dead a Swedish band that helped to mold some of today’s Metal standards.

Garnishing all is the monochromatic cover art by Romanian artist Costin Chioureanu which plays an apparent psychological game, where graphic simplicity invites to deep analysis and reflection. Definitely, this is a work to admire, both musically and visually.

Cover artist: Andreas Marschall
This year, these Floridian veteran Death metallers successfully came back from a self-imposed recording hiatus, thanks to their latest offering “Inked In Blood.” Although this groove-infused, hammering recording is not a match for the band’s now-classics “Cause Of Death” and “The End Complete” records, it surely demonstrates that the quintet still posses the capacity of crafting infectious, heavy-as-you-can-get metallic fare. If you find yourself, headbanging, contorting and even strangely dancing to the compass of some of these tracks, please don’t feel ashamed. That’s just a proof that this material really works in many sonic and psychological levels.

The album’s cover art, created by German illustrator Andreas Marschall, is gloriously gory and very fitting. However, its impact is diminished by its uncannily resemblance (both conceptually and visually) to the artwork for Cattle Decapitation’s LP box set, that also came out this year, some months before the unveiling of “Inked In Blood.” Was that a coincidence? Mmm… who knows. Thankfully, that doesn’t diminish the power of the music, which now out there for your utter enjoyment.

Cover artist: Rhett Podersoo
The Pagan Manifesto is an impressive new album from Italian ‘elf-metal’ maestros Elvenking. With its energy, its verve and its high standards of song-writing and general production, this album is a great addition to any power metal fan’s collection. ‘King of the Elves’ is a suitably rousing and epic track, while ‘The Solitaire’ sucks you in right away with its thrilling percussive intro and ‘Black Roses for the Wicked One’ is powerful and soaring. Overall on this album, the seamless blend of power metal and folk music proves to be a great combination and Elvenking’s signature style remains undiminished.

Icelands enigmatic awesome foursome wrote one of the best albums of 2014. Listen the absolute beauty in ‘Lágnætti’ (also check the hypnotic video with amazing Iceland nature) and title track ‘Ótta’. It is great to hear something new and refreshing in the metal genre and Solstafir is doing it right now better than anyone!

Cover artist: Andreu Beltrán
There are only 8 tracks on Helevorn’s newest release, Compassion Forlorn, but they are all well worth listening to. From opening song ‘The Inner Crumble’, with its atmospheric sound and slow, brooding progression through to final song Els Dies Tranquils, with the heart-wrenching guest vocals provided by Lisa Cuthbert, this album depresses and enthralls at the same time – but always leaves you wanting more. The superlative song-writing, the powerful vocals of Josep Brunet, the exquisite melodies and overall aura of doom, heartache and beautiful despair make this album one of the finest of 2014.

Cover artist: Anthony Clarkson
Sometimes I’m having a hard time and confused feelings as a metalhead who truly hates dispensable radio-friendly pop music but loves when it’s done by a metal band. Devin has so many songs in his career that should be noted even as pop’s finest moments. Luckily somehow he still manages to maintain the songs just slightly away from that direction and can scare all the radio geeks away. Z² consists of two albums released together. You have Devin Townsend Project album ‘Sky Blue’ and a ‘Ziltoid’ concept album, ‘Dark Matters’ which is a sequel to his earlier solo album ‘Ziltoid the Omniscient’. I’m not the biggest fan of Ziltoid thing but ‘Sky Blue’ hits hard. Excellent album and The Hymn of the Century award goes to song ‘Before We Die’!

Cover artist: Tomasz Alen Kopera
With one of the best album artworks of this year Fallujah hits big time also with the music inside the ‘The Flesh Prevails’. Throughout the whole album you sense mixed motions from fear to relief and from aggressive to calmness.

This was kinda surprise band to me but when I first heard the title track I was blown away. The Riff of the Year and Video of the Year awards goes definitely to Avatar and it’s title track ‘Hail the Apocalypse’! You also have other killer tracks like ‘Bloody Angel’ and ‘What I Don’t Know’ which kicks your ass to a bleeding wreck.

Brother Firetribe – Diamond in the Firepit

If you hail 80’s metal, have a sense of good melodies, love great choruses and value great musicianship you should give this album a hear. Brother Firetribe is a project band from members of Nightwish, Leverage and Kings of Modesty. Their two previous albums were instant classics and this one has taken them even a step forward. Stand out track ‘For Better Or For Worse’ among many other catchy hymns makes this one one of this years finest albums.

Good old Billy still has it. This one is a solid rocker and stands out as one of the finest in his catalogue. ‘Bitter Pill’, ‘Can’t Break Me Down’, ‘Save Me Now’, ‘Postcards From The Past’ and ‘Nothing To Fear’ – all great examples how to rock!