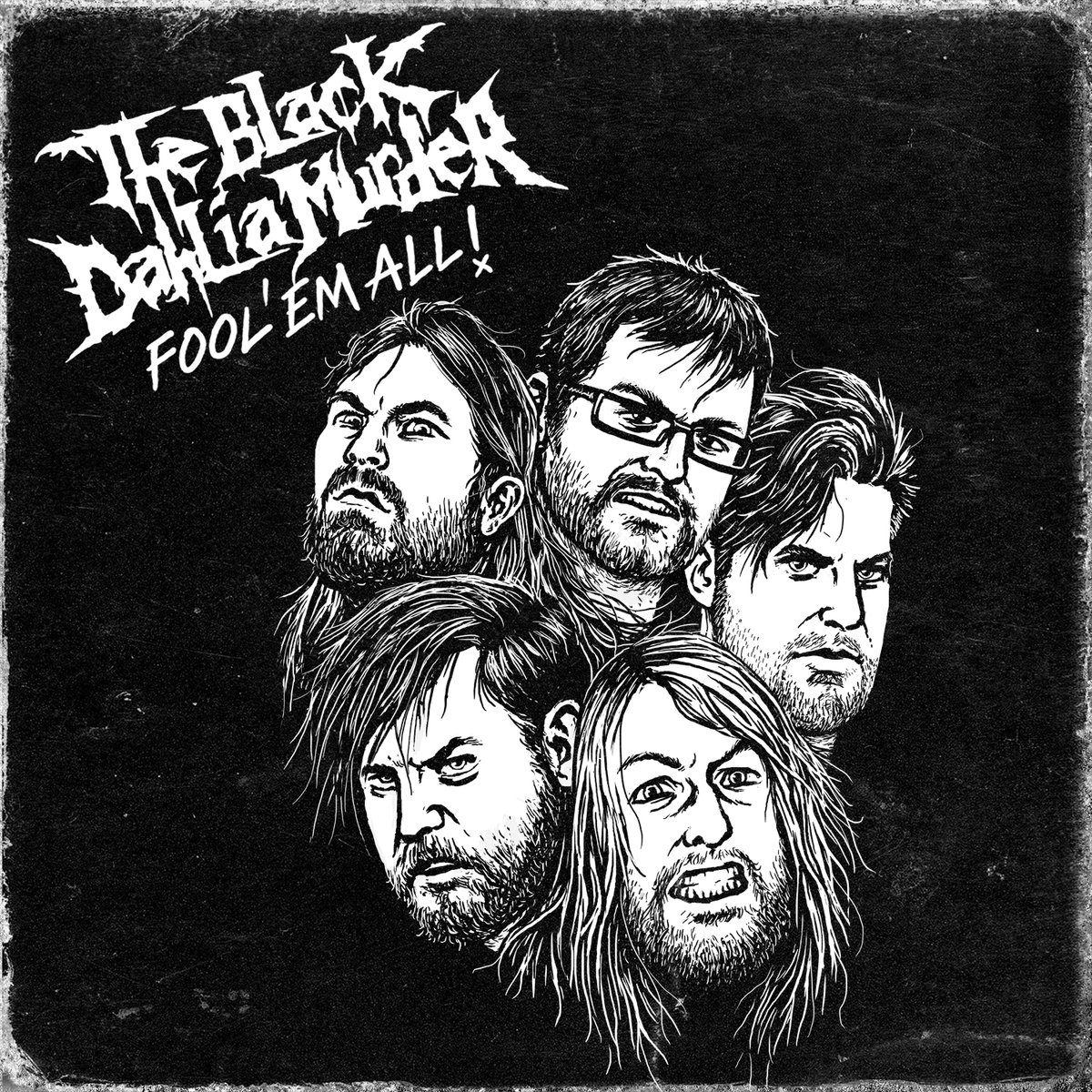 The Black Dahlia Murder is an American melodic death metal band from Michigan. They formed in 2000 and for the past fourteen years, they have been consistently releasing crushingly brutal music for metal fans. On April 22 they performed for the first time in Shanghai, China. Yours truly, a local expat with my own metal project, had the honour of performing with them that evening and I was also able to catch Trevor Strnad, their vocalist, for a few words. The following interview took place after their incredibly tight performance (and after consuming an appropriate dosage of Jameson and such).

HMA: If you had to pick your poison and it had to be either and not both, pot or Jagermeister?

Trevor: Pot. It’s not that I’m not an alcoholic, that’s a lie to say anything other than that. But I’ve killed myself on jager so much; I’m more toward the whiskey spectrum, right now. You know you have to retire liquors for a while, a long while. There was a time when whiskey was my bane because I woke up in a puddle with caramelized vomit all over me. Whiskey sours, talk about real heartburn, whiskeys plus some sugary shit mixed into it. (belches) I quit drinking for 8 months, just to clear my head, stop making my fucking girlfriend crazy, stop fucking drunk dialling her at four AM (drunk metal growl phone message impression), and this other shit. Pot got me through it was so boring though, pot saved my life then. And when I’m home and on tour, the boringness of tour…

HMA: Get through dull times?

Trevor: In the van, we have this vaporizer, there about seven guys we roll with and more than half don’t smoke, so we just vaporize in the van and we pass it around.

HMA: I watched your DVD, I felt like pot was a group participating…

Trevor: Well, the drummer then, Shannon (Lucas), was straight edge. Alan (Cassidy) drinks and smokes a little bit, he’s a light smoker. He doesn’t smoke before we play because he is a responsible young gentleman. And you know Shannon was a good drummer, he was a cool guy, it was insane to have a straight edge guy. And he came in knowing who we were, it wasn’t like he didn’t know we were Cheech and Chong and the boys. He knew we were fucking partiers. But if I had to live forever, fucked up one way, weed. (laughs)

HMA: I’m doing this interview on the behalf of heavymetalartwork.com, so they are really into metal bands’ artwork.

Trevor: I love album art! I love that we have money to buy cool album art finally! When we started we didn’t. We used to make our own shirts in Photoshop, my friend Gideon would draw the picture and it would be a total Pushead rip off. And then we’d Photoshop the colours in and it took six hours and we’d go “That looks cool” but it looked like crap. No, no but his drawings were really dope though. We actually got a cease and desist from Pushead.

HMA: Really? It was that similar?

Trevor: It was… well, it wasn’t as freakishly amazing but definitely was cut from that. I love death metal artwork. My favourite artwork… god damn, it’s a long list…

HMA: Let’s put Cannibal Corpse aside because all of their album art is sick.

Trevor: Alright, because I think that death metal is so tied to a visual representation too and that when I listen to a record I look at the cover and if you fuck that album cover up if it sucks if it’s pixelated, and it looks like crap… I want to say 60% of my death metal CD’s look like crap. They’re great records, some of them, but if you nail that cover art, you’ll have that association always where they see that and go “YES”. The newest one, Everblack, is probably our biggest achievement I think as artwork.

HMA: I was going to say, Everblack that’s my favourite album art out of all of your albums, you have this crazy lightening maelstrom and I wanted to ask you about the graves in the foreground. Because that’s very master of puppets and your new DVD is “Fool’em All”…

Trevor: Whoa! I didn’t think about that! I know “Fool’em All” is deliberately and the cover art is exactly like from Kill’Em All but the graves, what I had said was, “I want Left Hand Path from Entombed but on steroids” and I said “three panels for the artwork, cemetery planet” There is a lot of hidden stuff in there, I said hide stuff in there because that’s what all the old covers had, like Dan Seagrave, Andreas Marshall. I’m still so in love with the tried and true death metal formula so it’s always going to be blood and guts, its always going to be gore, Evil Dead is the most tried-ass thing that’s ever been done but…

Trevor: That’s how I feel. I still feel excited about what I’ve always loved about death metal so I always try to pipe that into what we do. Visually, I’m the guy who does that. I’m the shirt boss and the artwork guy.

HMA: So you decide that stuff?

Trevor: All of it.

HMA: So do you always use the same artist?

Trevor: It depends, honestly I think that we’ve been the first in a few cases, definitely with shirt guys, where we started a trend. And we had to an abandoned certain artist, you know “we love you but you employ too many people that weren’t us, WHAT ARE YOU DOING?!” Our dream is to have a sick exclusive artist, they would only do us. They would do ads for car companies or whatever but they can’t make shirts for Aborted, wink wink.

HMA: Which up and coming metal bands will be the next big thing and where do you so the industry going?

Trevor: I don’t really know what to say about this. I do see some certain things right now, I see that there is a big influx in retro bands, your Ghost in one corner and you have Entombed sounding Swedish bands in another, Incantation that sounds like it’s in a dungeon. I think people are getting sick of pro tools. It all sounds the same, same snare, the same production, everything is huge, everything sounds like a gunshot, it sucks, it’s boring.

Trevor: Well, I’m not saying I want to record on 2-inch tape. Pro tools is ingenious but the cop out of like, “I got the same drum kit as all these other producers”, every tom, everything is huger than life. I think the scene moving away from that is becoming more attractive to people. I think deathcore is kind of winding down now. There are only a few bands still standing, Whitechapel, Suicide Silence sound like they’re back.

HMA: They came out here and played an amazing show.

Trevor: They are really gnarly live. Eddie Hermida, I love that guy, he has some big shoes to fill, he got nuts to do it, he was tight with Mitch, and he’s a good guy, he’s the right guy. They’re only a few bands left from that scene and for a while, it was so over saturated but I think the bands that deserve to be around are around. There’s a lot of djent right now.

HMA: What do you think about that?

Trevor: I like some of it. I listen to all sorts of shit, punk, hardcore, fucking pussy shit, everything.

HMA: You guys are one of my favourite bands. Bands for me like Veil of Maya or Born of Osiris, I saw born of Osiris live and they crushed it.

Trevor: Yeah we toured with those guys. Veil, before they were Veil of Maya they used to a have a BDM wannabe band and we used to talk to them. They’re from Chicago, and they were fourteen and shit, they were called Insurrection, they were like “you guys rule!” they were sweet. Their drummer, Sam, I’ve actually hit him up. We’ve looked for drummers maybe fourteen different times… no that’s exaggerating but I’ve called him at least three times and he always pussied out (laughs).

HMA: I see bands like that being successful in the future.

Trevor: I think that kind of metal is more digestible. It’s way more easy to grasp then what we’re doing, most of it’s 4/4, it’s just huge. In that regard, that is where pro tools are strong, that’s why pro tools exist. You shouldn’t make your thousand miles per hour death metal band where you can barely hit the snares sound like WHAP WHAP WHAP WHAP WHAP (laughs)

HMA: What are some typical mistakes made by aspiring musicians? And how can they be avoided?

HMA: You guys got signed off of your demo, right?

Trevor: Not our first demo, our first demo is rubbish. It’s from 2001, that’s our first year in existence and it was like, there was this band before Between the Buried in Me called Prayer for Cleansing and we worshipped them and it sounds like that. I even sang on it.

Trevor: Yeah, but there were no pro tools so me and Brian, somehow we are the only two left from that era, we both sang. We had a scarmony, which is a harmony that doesn’t match up, a bad harmony – scarmony.

HMA: (laughs) So you think there be clean vocal singing on upcoming Black Dahlia records?

Trevor: No no, honestly, there places for that in metal but a lot of the forced screaming singing stuff is just fucking garbage. If you’re Opeth it’s one thing or singing clean all the time like Iron Maiden, I love power metal. But for me, this band similar to Cannibal Corpse, where the fans would know we’re never going to pussy out, we’re never going to just jump on a trend. We’re always going to be Black Dahlia Murder and we’re glad to sing them.

HMA: Your label forces you to produce a track with a rapper. Who would you produce it with?

Trevor: This reminds me of the Judgment Night soundtrack, where it was like Ice-T and Slayer, Faith No More Booya Tribe, Cypress Hill and Pearl Jam, Helmet and House of Pain, Run DMC and, I forget who they were with, Teenage Fan Club? But it was at the time, before nu metal. It was so freakishly cutting edge. It was like Anthrax and Public Enemy coming together. That’s it; I want Chuck D from PE. “Bass, how low can you go? Death row, Whata brotha know?”