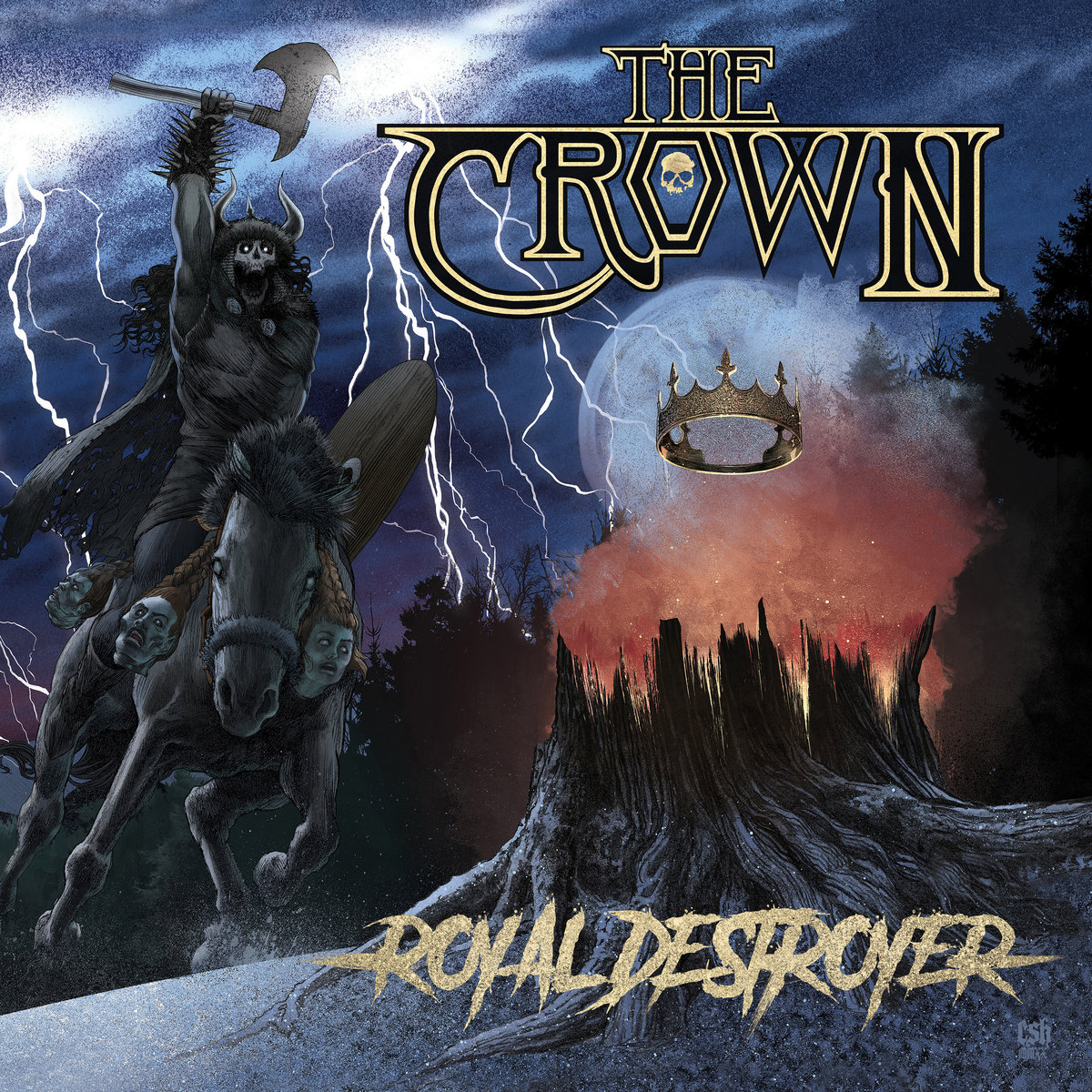 It’s a natural progression from the previous album Cobra Speed Venom. It has that same intensity and aggression but in a better and more luxurious package. This lineup has started to grow together, and you can tell that in the structure and feel of the songs. When you feel tight as a group, it reflects on the recordings you do. Soundwise it’s a typical Crown recipe but more polished, I believe. It’s recorded in 7 days at Studio Fredman, and we had a lot of fun doing it. And the process of making Royal Destroyer is the same way we have always worked. One guy does the basics of a song at home, then brings it to the others, and we all start to mess with it as a band and eventually Crownifies it. It was the same way this time around, but nowadays, more people are involved in the process, which feels great. When you have more songwriters in the band, you can get a wider sound for sure, and you can sense that on Royal Destroyer.

We had more time than ever to get the songs ready for the studio this time around. We were supposed to enter the studio already in May 2020, but a certain virus sort of made things difficult, so we had to postpone it a few months, but that was for the better. We had a different set of songs than when we first intended to record, well, at least two songs that didn’t end up on the final recording. So Covid-19 gave us more time to polish the songs and to pick out the best tunes for Royal Destroyer. But normally, you just write your songs rehearse as much as possible to make them as good as possible before entering the studio. You can’t do more than that. There’s no recipe to make the greatest album of all time. You just have to have faith in your songs and hope for the best, and I’m extremely proud of all albums we’ve done. Ten albums done so far, and we have also now begun the process on the album No 11. We’re not done with the killing yet.

No, not really. Maybe there was a time 25 years ago when we had a certain view on life, but nowadays, we’re just five guys having fun playing music together and trying to write extreme songs and kickass lyrics inspired by dark topics from fiction and fantasy or real life. And even if you can unleash lyrics from hell from deep within, It doesn’t change the way we live our lives in general, which is pretty normal and basic. I think there’s a The Crown switch there. On or off mode, to be honest.

I started to listen to regular rock music in the early 80s. Kiss, Twisted Sister, AC/DC, but at the end of the 80s around the same time when Metallica released… And Justice for all and Slayer came out with South of heaven. I was hooked on that, and Magnus and I started to explore more and more extreme music before starting our band in 1990. And there were many live bootlegs on VHS circling with Slayer, Metallica, Sepultura, etc. We just sat there with our mouths wide open, and I think it was there, and then we decided that we wanted to be on stage and do what they did. A guy at school was maybe two years older than us who got his hands on all kinds of extreme cassettes that we copied. The sound was always unlistenable because of the 20th copy generation or something, but it was extremely cool, so that was also a very important thing that made us who we are today.

Music is both those things for me. When you play your music in front of a crazy crowd that is really into what you are doing, it can be a spiritual experience. It’s you and a couple of hundred people trying to reach that same climax to all the songs you and your bandmates have created. That’s something special for sure. But I also see it as entertaining as well. I love to release new albums so I can have another reason to go out and play and show the world “Here I am, and I’m pretty fucking awesome”.
www.facebook.com/thecrownofficial