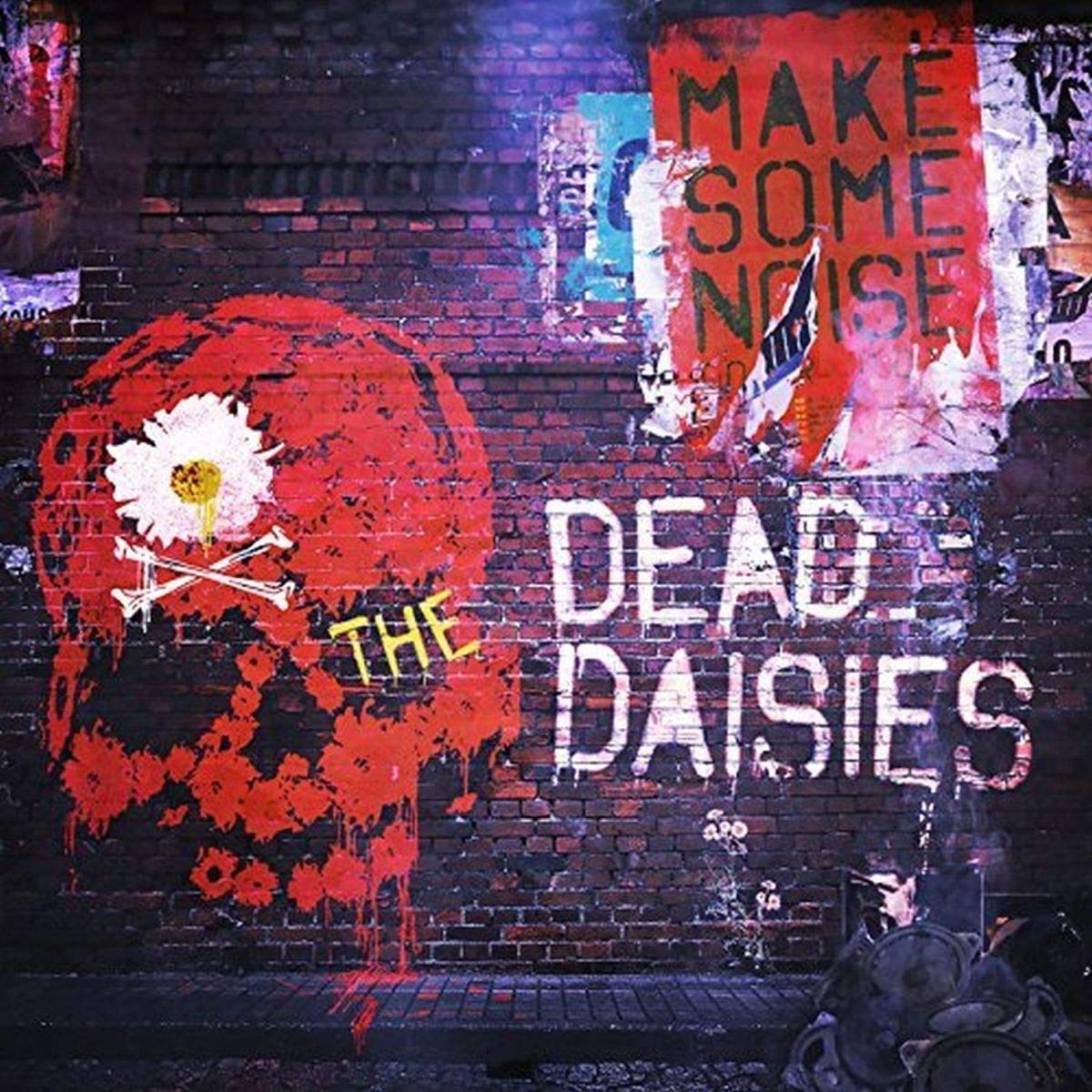 American/Australian rockers The Dead Daisies can be proud to feature a very impressive collection of musicians as members; John Corabi (Mötley Crüe, Ratt, Brides of Destruction), Doug Aldrich (Dio, Whitesnake), Marco Mendoza (Whitesnake, Thin Lizzy) Brian Tichy (Ozzy, Foreigner) and David Lowy (Red Phoenix, Mink). This super-group takes you back right when rock n’ roll was real, untainted and raw, a true celebration of the real rock n’ roll attitude, sound and lifestyle straight from the ’70s and ’80s. Corabi’s voice is as wonderful and powerful as ever and those guys live will blow your mind, you’ll dance, you’ll drink you’ll sing along. The Dead Daisies’ new album “Make Some Noise” came out on the 5th of August, they are currently touring the States with Kiss on the Freedom to Rock Tour and they are getting back to Europe in November, so whatever you do don’t miss them. We caught up with the legendary John Corabi at the Ramblin’ Man Fair Festival to talk about music, life, tours, new projects and the meaning of rock and roll.

HMA: What went into your new album ‘Make Some Noise’, what is the concept and what are your expectations?

John Corabi: We are getting a great response from the shows and from the records already so we’re pretty positive about the album. But you know, honestly, when we do the records we don’t really have a blueprint. We’re all into the same types of music so we just go with the flow. You know what I mean? We just sit in a room and everybody starts on their phone, they’re like “Oh, check out this riff” and “Check out that riff.” We just kind of build from there and it’s really fast. With these guys, there’s so much talent in the band. Last record and this record, we literally wrote the record, recorded it, mixed it and mastered it in…This one was thirty-five days and then the last one was about the same. It’s pretty easy.

HMA: How did you get involved with The Dead Daisies?

JC: Honestly, they had another singer prior to me, a guy named John Stevens who, just for the record, is an amazing singer… I don’t know what happened there, why they called. Marco called me and said “Hey, we’ve got a trip to Cuba and we’d love for you to come over,” and I flew over to Cuba with them and we had a great time over there. We did two shows. It was amazing and then they just asked me to do the record I’ve been here, now they can’t get rid of me.

HMA: You were actually the first band, well the first non-Cuban band, to play in Cuba thereafter President Obama’s deal with Cuba to lift travel and trade restrictions. That must have been a great experience.

JC: Yeah, yeah, yeah, it was very good. We did a club show, a huge club show, and then we did a big outdoor amphitheatre and it was insane. There was like seven or eight thousand kids there and there was a bunch more outside. They were so grateful for us to come. And I highly recommend Cuba, if anybody can go, it’s a beautiful little island, it’s lovely and it’s very inexpensive. You’ll have a great time. It’s cool.

HMA: You guys seem very close together and having loads of fun, do you believe that is one of the key ingredients for a successful band?

JC: Yeah absolutely. That’s the thing with us, we’ve all known each other for so long that when we go onstage we really are just having fun. Even when Doug’s playing solos or I’m singing, we’ll all be talking to each other and telling jokes. Marco, a lot of times, we’ll sing together and then he’ll kiss me on the cheek. But it’s all in joking, you know? We have a good time.

HMA: What is your writing process, what inspires and influences your lyrics?

JC: For example, like ‘Long Way to Go’, our first single, it’s pretty obvious. I mean, if you turn the news on any day of the week, we just get bombarded with things and I try not to repeat myself, at least on a record anyway. It’s from anything about women, just life on the road…”Last Time I Saw the Sun” was about life on the road, ‘Long Way to Go’ was about all the crazy shit that’s happening in the world and just life, I think. Yeah. ‘A Song and a Prayer’, I guess there’s a little bit of life in it but that’s probably the most fictional lyrics because I’m just kind of making things up- Whatever. So I will say my inspiration is mainly life, man, you know? If you can’t get inspiration from everything around you, man you don’t have your eyes open.

HMA: You recently played an acoustic show in Prague, are you planning to play more acoustic sets during the tour?

JC: We did it at the Hard Rock Café. Yeah we’ll probably do it again. We do them when we can. They’re a lot of fun and it’s just a different side to the band, we can just sit down in a room, a very small setting and we have a great time. We did the same one last year and then we did a few of them. It’s usually management. They’ll say “Oh, we’re going to do an acoustic thing tomorrow or whatever,” but I like doing them. It’s fun. It’s very, very relaxing.

HMA: You have seen the music industry and the Rn’R scene evolve and change; how much do you think it has changed for the best and for the worst?

JC: In some ways, a lot of people are saying “rock is dead” and all this stuff, and obviously I disagree because you go to festivals and it’s packed. We just did one in Poland. There were a couple hundred thousand people there Yeah. It was amazing. I think the difference now is that a lot of these newer bands, they don’t have a huge machine behind them like in the eighties Like MTV, all the radio stations or money is just thrown at you. It’s a little different. You have to be a little smarter with your money. You have to be a little more hands-on now with the Internet and Facebook and Twitter. You’re constantly just communicating directly with the fans It’s like life, you gotta learn to adapt with anything so I think the fans are still there, you just gotta figure out how to let them know that you’re there as well.

HMA: Do you actually think there’s new blood in rock and roll?

JC: Oh yeah definitely. There are a lot of great bands. We’re going out with a band called “The Answer” and they are great. The band “Inglorious” that’s been travelling with us, I think they’re a great band. I love also Rival Sons. There are a lot of new bands that are coming out but it’s funny, I think a lot of them are really starting to get into the stuff that we grew up with in the seventies, classic, riff rock and I dig it, man… It’s pretty cool.

HMA: You had collaboration with many different artists, is there someone who you would still like to work with?

HMA: If you could have your own festival, which three headlines would you chose?

JC: Three headliners? I would actually have…God, that’s a good question. I think I would do the original old Queen. I would love to have Queen play, I would love to have Led Zeppelin play…original, you know? Obviously, if we can make that happen that’d be awesome. Then, this is weird, I don’t know how big they were in Europe, but I would love to have the original Grand Funk Railroad and I would be happy…Then just let me play as well and I would just I would probably annoy the shit out of everybody like “Oh, dude, the time that you did this…”, I would just “Can you do that? Hey, Paul! When-“”Can you do that song? Can we do that?”

JC: Ahahah Yes. “Sign this!” It would be crazy.

HMA: You’re going to be on the road for quite a long time, you’re coming back to Europe in November and now you are embarking in a tour with Kiss and Whitsnake in the US are you excited about it?

JC: Oh yeah, we’re pretty excited. We are pretty much booked right now till December twenty-second. Then we’re going to Japan and South Korea. Then we come back and do the “Kiss Cruise”, and then we’re coming back here in November, December with The Answer. It’s going to be a crazy year. In between, we’ll have a week off and then I fly back to America and then I have a solo band in America. I also have a new record coming out in October, a live album. It’s like we have two weeks off and I go “Okay, guys I have two weeks off. Let’s play,” and then we go do shows.

HMA: What is going on with the album with Mick Mars? Is that still happening?

JC: The problem with it is that I did two songs with Mick. I would love to do something with Mick; I just got to figure out when. How I can fit it all in. That’s just the problem right now, figuring out how to do it. Because when Mick and I first talked about it I was just doing my solo band so I was busy but not crazy busy and Mick went on tour with Motley Crue and then the Dead Daisies called and now I just don’t know when I’m going to have the time. I’m trying to figure it out with him but right now I did two songs and I love them both, they’re great. I can’t wait for Mick to do his solo record and hopefully, I can help him.