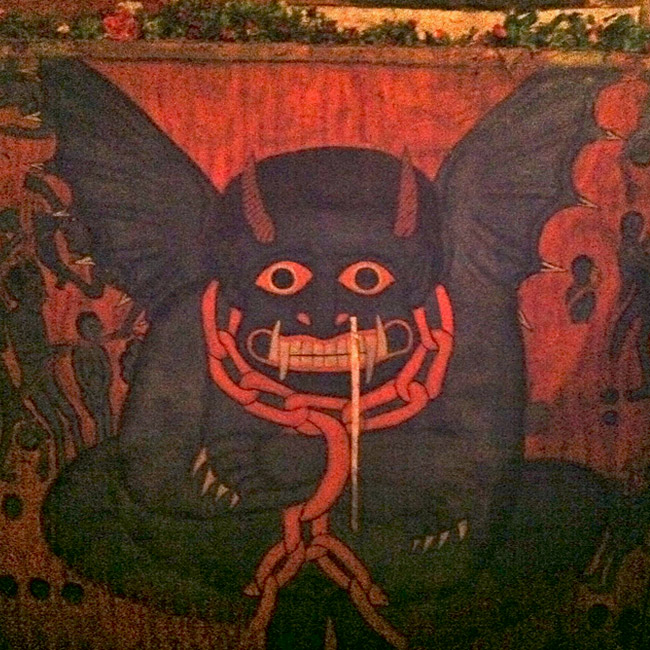 THIS WORLD OF OURS is a world of opposites. There is light and shade, there is heat and cold, there is good and evil, there is God and the Devil. The dualistic conception of nature has been a necessary phase in the evolution of human thought. We find the same views of good and evil spirits prevailing among all the peoples of the earth at the very beginning of that stage of their development which, in the phraseology of Tylor, is commonly called Animism. But the principle of unity dominates the development of thought. Man tries to unify his conceptions in a consistent and harmonious Monism. Accordingly, while the belief in good spirits tended towards the formation of the doctrine of Monotheism, the belief in evil spirits led naturally to the acceptance of a single supreme evil deity, conceived as embodying all that is bad, destructive, and immoral.

Monotheism and Monodiabolism, both originating simultaneously in the monistic tendencies of man’s mental evolution, together constitute a Dualism which to many is still the most acceptable world-conception. Nevertheless, it is not the final goal of human philosophy. As soon as the thinkers of mankind become aware of the Dualism implied in this interpretation of the world, the tendency is again manifested towards a higher conception, which is a purely monistic view.

Will Monism eliminate the idea of the Devil in order to make God the One and All? Or will it abolish both God and the Devil, to leave room only for a world of matter in motion? Will the future of mankind be, as M. Guyau prophesies, a period in which religion will disappear and give way to irreligion?

Those who do not appreciate the mission of Dualism in the evolution of human thought, and only know its doctrines to be untenable, naturally expect that the future of mankind will be irreligious, and there are freethinkers who declare that Atheism will supersede all the different conceptions of God. But this is not probable. The monistic tendencies of the age will not destroy, but purify and elevate religion. The Animism of the savage is a necessary stage of man’s mental evolution: it appears as an error to the higher-developed man of a half-civilised period; but the error contains a truth which naturally develops into a more perfect conception of the surrounding world. Similarly, the religious ideas of the present time are symbols. Taken in their literal meaning, they are untenable, but understood in their symbolical nature they are seeds from which a purer conception of the truth will grow. The tendencies of philosophic thought prevailing to-day lead to a positive conception of the world, which replaces symbols by statements of fact and brings with it not a denial of religious allegories but a deeper and more correct conception.

A state of irreligion in which mankind would adopt and publicly teach a doctrine of Atheism is an impossibility. Atheism is a negation, and negations cannot stand, for they have sense only as confronted with the positive issues which they reject. Yet our present anthropomorphic view of God, briefly called Anthropotheism, which as a rule conceives him as an infinitely big individual being, will have to yield to a higher view in which we shall understand that the idea of a personal God is a mere simile. God is much more than a person. When we speak of God as a person, we ought to be conscious of the fact that we use an allegory which, if it were taken literally, can only belittle him. The God of the future will not be personal, but superpersonal.

But how shall we reach this knowledge of the superpersonal God? Our answer is, with the help of science. Let us pursue in religion the same path that science travels, and the narrowness of sectarianism will develop into a broad cosmical religion which shall be as wide and truly catholic as is science itself.

Symbols are not lies; symbols contain truth. Allegories and parables are not falsehoods; they convey information: moreover, they can be understood by those who are not as yet prepared to receive the plain truth. Thus, when in the progress of science religious symbols are recognised and known in their symbolical nature, this knowledge will not destroy religion but will purify it and will cleanse it from mythology.

We define God as “that authoritative presence in the All, which enforces a definite moral conduct.” God is that something which constitutes the harmony of the laws of nature; God is the intrinsic necessity of mathematics and logic; God above all is what experience teaches us to be the inalienable features of righteousness, justice, morality. This presence is both immanent and transcendent: it is immanent as the constituent characteristic of the law that pervades the universe; it is transcendent, for it is the condition of any possible cosmic order; and in this sense it is supercosmic and supernatural.

We do not say that God is impersonal, for the word “impersonal” implies the absence of those features which constitute personality; it implies vagueness, indefiniteness, and lack of character. God, however, as he manifests himself in the order of the universe is very definite. He is not vague but possesses quite marked qualities. He is such as he is and not different. His being is universal, but not indeterminable. His nature does not consist of indifferent generalities, but exhibits a distinct suchness. Indeed; all suchness in the world, in physical nature as well as in the domain of spirit, depends upon God as here defined, and what is the personality of man but the incarnation of that cosmic logic which we call reason? God, although not an individual being, is the prototype of personality; although not a person, thinking thoughts as we do, deliberating, weighing arguments, and coming to a decision, he is yet that which conditions personality; he possesses all those qualities which, when reflected in animated creatures, adds unto their souls the nobility of [paragraph continues] God’s image, called personality. Therefore we say, God is not impersonal, but superpersonal.

While the idea of God has received much attention from philosophers and progressive theologians, its counterpart, the dark figure of the Evil One, has been much neglected. And yet the Devil is, after all, a very interesting personality, grotesque, romantic, humorous, pathetic, nay, even grand and tragic. And if we have to declare that the idea of God is a symbol signifying an actual presence in the world of facts, should we not expect that the idea of the Devil also represents a reality?

It is almost impossible to exhaust the subject, for it would take volumes to write an approximately complete history of demonology. Accordingly, we must confine ourselves to merely outlining some of the most salient features of the development of the belief in the Devil and the nature of the idea of evil.