The Making Of The Poster For ‘Home Of The Wind: A History Of Moonsorrow’ 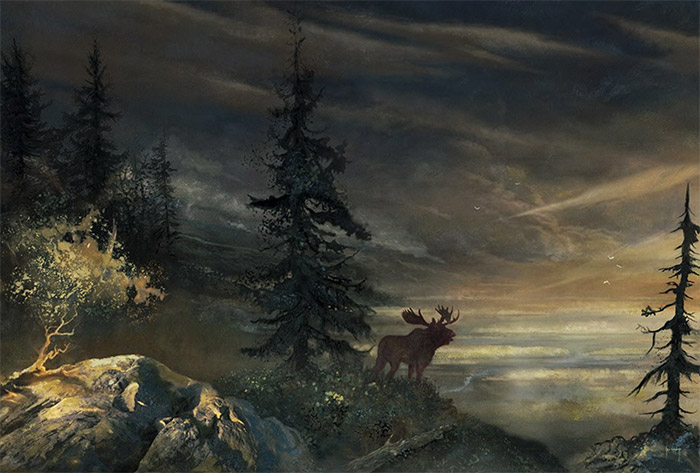 For young filmmakers Leo Aragón and Abel Grilo Do Demo, bringing to life the upcoming documentary “Home Of The Wind: A History Of Moonsorrow” has been a true epic journey—as epic as the music of the band they’re focusing on: Finland’s Moonsorrow. They started working on the project more than a year ago, without knowing how they were going to finance it. There was not even certainty about the band’s potential support. Today, that’s changed. They count with the Pagan Metal group’s blessing and have embarked in a titanic crowd-funding campaign via Indiegogo to raise the funds they need. With only a few days to go before the end of the campaign they have already raised 70% of the campaign’s goal.

The film’s official poster was painted by legendary illustrator, Kris Verwimp, who has crafted many album covers for bands like Absu, Marduk, Suidakra, among others. He even previously collaborated with Moonsorrow on the cover for the EP, “Tulimyrsky.” In the following interview, scriptwriter, Grilo Do Demo and Verwimp talk about the creation of the poster for the documentary.

HMA: Grilo, you are the scriptwriter of “Home of the Wind” and also author of the Unofficial Moonsorrow Biography. How did you start working with Kris Verwimp on this project and why did you choose him?

Grilo do Demo: I am a fanboy of Kris, I love his art since I realized several awesome covers were painted by the same person, and then I looked at everything he had on his website. I blatantly stole one of his Thyrfing drawings to use as a banner in my blog many years ago. One or two years after that I bought his art book and comic, and later I decided to go the more legal way and ask him for permission to use his draft for Tulimyrsky as a banner in the Unofficial Moonsorrow Biography. I showed his work to Leo and loved it too, so the question if we had chosen someone else would rather be: why on earth did you not choose Kris Verwimp?!? At first we thought he wouldn’t be interested, we just tried because we had nothing to lose, but everything went very smoothly since the first moment. He accepted instantly and started working very quickly.

HMA: What was the initial idea for the poster artwork?

Grilo do Demo: It reflects the concept behind the title. “Home of the Wind, Home of the Waves” is the translation of “Tuulen koti, aaltojen koti,” the title of one of the songs in Moonsorrow’s debut album. In addition to this reference, in our case, home represents Finland, where the film will be shot; wind represents nature. As for the image, we wanted a natural landscape reflecting a calm atmosphere, with a central figure in the right side. That’s pretty much all we told Kris. Everything else was his idea. I personally love the presence of the waves—it’s kind of obvious in a way when you know the origin, but still a delightful detail. I also like the illuminated tree in the left, although I don’t know what it represents, if anything at all. My flat mate even compared it to the burning bush in the Bible… Who knows!

Kris Verwimp: I was given the title and some guidelines. It had to be a nature scene in a DVD size format and there should be enough room for the logo. Everything else was up to my own imagination. The title itself creates a certain expectation, so I wanted to go for a sweeping landscape with a lot of open space and a lot of sky to convey the concept of the wind. The warm colors were meant to add a sense of belonging. The animals were painted to make the composition a bit more dynamic. The main source of inspiration was of course Moonsorrow’s epic music itself!

HMA: Kris… What was your reaction towards this particular project?

Kris Verwimp: I thought it was a great idea! I believe that nature can also be pretty epic and I think that the concept fits the title very well. So it was something a bit different than usual and it required a different approach.

HMA: What was your reaction to see the process and the final result?

Grilo do Demo: He sent us the first unfinished version less than a month after accepting the task, and we thought, “is this really unfinished?,” because, sure, some details were missing here and there, but it really looked like a 99% ready job in very little time. But then he worked a lot on the clouds and the overall light, which gave it a completely new dimension. It’s a wonderful piece of work, and I’m very honored to have had master Kris Verwimp paint for our humble project. I’ve had it as my PC’s desktop background for a while and updating it with every new version, haha! We just love it, it perfectly captures the atmosphere we want the documentary to have.

HMA: Thanks for your time guys. Please, offer your last words to our readers, especially about your current Indiegogo campaign.

Grilo do Demo: Thanks a lot for the opportunity you’re giving us! Moonsorrow fans: thanks for all your support; I really hope we can reach the minimum goal during the last days of the campaign! You can still support us via Indiegogo getting any of the available perks and also with an open donation. It’s been a year of hard work, the decisive moment is now! Here’s our campaign: igg.me/at/homeofthewind.