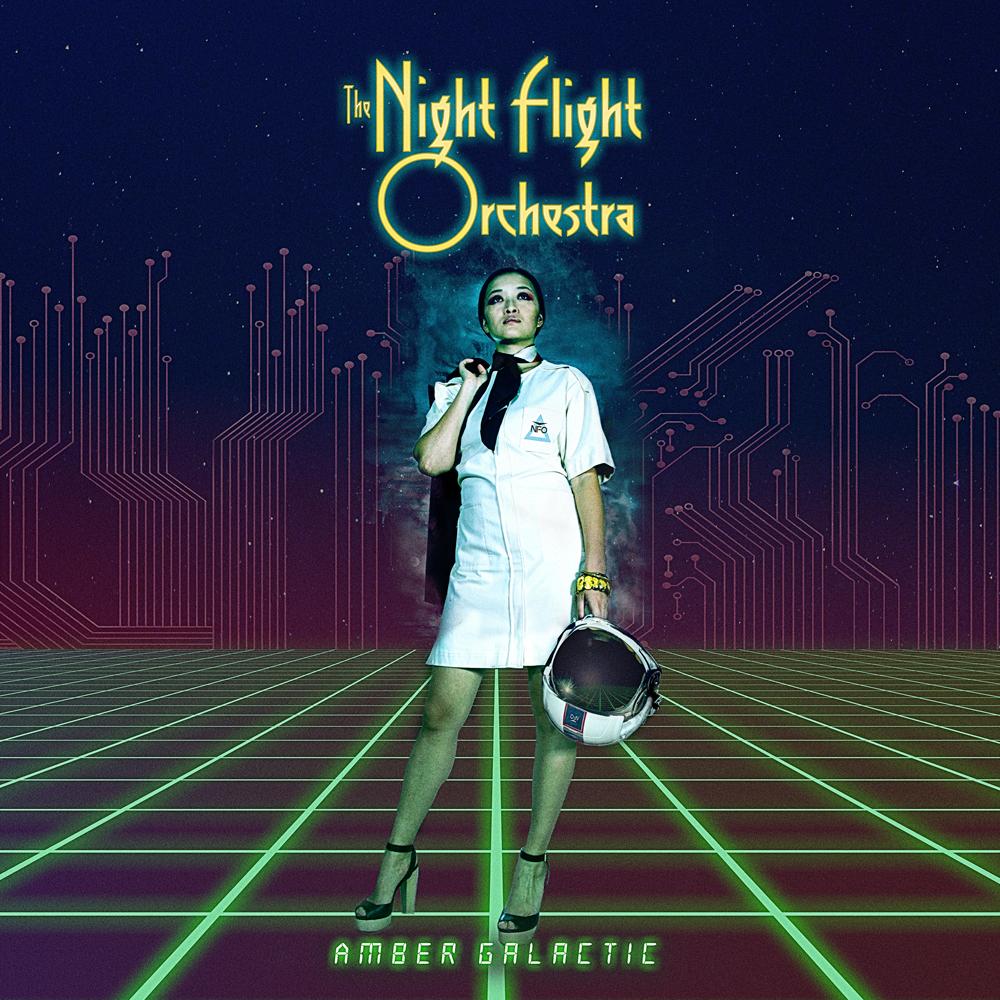 ‘Amber Galactic’ is a concept album in a way, although it doesn’t have a straight narrative. It’s more a collection of stories that take place in the same universe. ‘Amber Galactic’ is set in a future where humanity is exploring and conquering space, but all the space commanders are women, just like the leaders back on earth, and the men are  mostly concerned with providing the ground service and idolizing and falling in love with those superior women that are always slightly out of reach.

The space theme was my idea. I’ve always read a lot of sci-fi books, mostly because in science fiction, anything is possible, and the things that you never thought would happen actually do happen. And, in a way, all those classic bands and artists from the ’70s and ’80s had the same totally over-the-top approach to everything that they did that was very science fiction-like, where everything was possible and there was no self-irony or “less is more” thinking involved. Although the music industry was very different back then, and there was a lot more money, resources, and drugs involved, I still felt that it is a shame that no one does those kinds of things anymore, at least not in rock music. It’s always been a dream to do something really epic, and what can possibly be more epic than space? So we decided to have had a go at it and just try to do the most epic, outrageous album possible.

Our music is like entering a Las Vegas casino, only to find out that all the women are secret agents in evening dresses, and the free drinks contain hallucinogenic drugs. On this album, Björn wrote the lyrics for his own two songs, we collaborated on one more, and the rest is pretty much me. ‘Amber Galactic’ is actually a space opera with a feminist agenda. I’ve always dreamt about doing a space/sci-fi album, and even if it’s not a concept album in the true sense of the world, it’s based around a concept with sci-fi and futuristic overtones.

NFO songs have always been written from the melancholic and losing perspective of the male, albeit we still want it to be uplifting and sometimes humorous for the listener, no matter who she or he is. From the second record and onwards, we also started adding female voices speaking that have sort of a commentary function, which we’re doing even more on Amber Galactic.

Amber Galactic is set in a future where humanity is exploring and conquering space, but all the space commanders are women, just like the leaders back on Earth, and the men are mostly concerned with providing the ground service and idolizing and falling in love with those superior women that are always slightly out of reach. Both Jennie and Gemini are songs about female space commanders, and the animated video for Gemini is based around the same theme. So one level the album is just a classic rock sci-fi themed party album, and on another level, it’s a social commentary describing a utopian future.

Nothing changed in the recording process, we’ve always produced and recorded everything ourselves. We don’t have any formula as such; we just meet in the studio, throw up some microphones, have a few drinks and start playing. But I guess we’ve gotten better at playing to our strengths and emphasizing the elements in our music that set us apart from other bands. Though it’s nothing we’ve talked about, more like something in our collective subconscious.

We are ageing but timeless Swedes, trying to create the perfect soundtrack to being on tour, or just being on the road or in motion for whatever reason. And there’s nothing more classic than being somewhere above the clouds in the middle of the night, is there?

We’ll do an exclusive show at the Rock Hard Festival in Gelsenkirchen, Germany on the 3rd of June, and then we’ll hopefully do some sort of European tour in the fall. After that, we’ll see. It’s really fun playing live with The Night Flight Orchestra, and we’re always open for suggestions.

We’ve also started recording the follow-up to ‘Amber Galactic’. We all have busy schedules, so we try to get together in the studio for a few days here and there whenever we get the chance. From the very moment, we first started playing together, there was really special chemistry there, both on a musical as well as on a personal level, which is really rare. Whenever we get together it feels like a combination of a vacation and a party. So even if we wouldn’t have had the opportunities to do this on a slightly bigger scale, we’d still continue to create music and release it through whatever channels that would be available.

Albums that marked important moments in your creative journey: