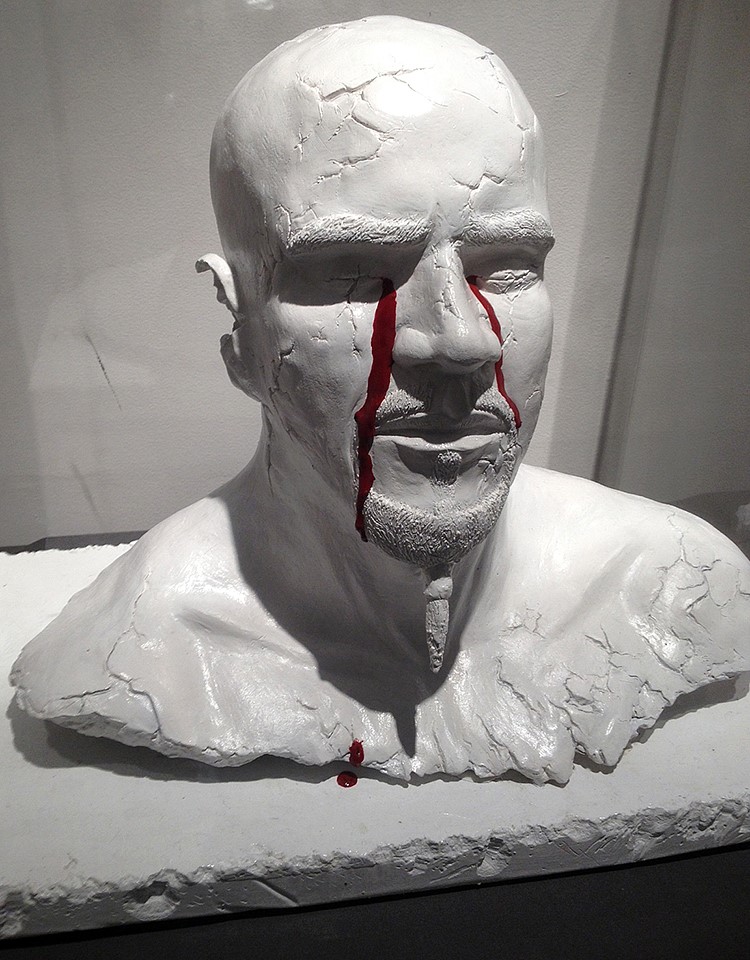 Salem Art Gallery – the headquarters and cultural center of The Satanic Temple, Salem, MA (64 Bridge St.) – is pleased to present “Sanguine Spring”, a selection of large-scale paintings, limited editions and sculpture by world renowned artist VINCENT CASTIGLIA. The exhibition is inspired by the idea that Romans viewed February as a time of purification and honoring one’s ancestors. Ritualized bloodletting, purging, and celebrations of opulent excess often accompanied observances such as Lupercalia, Parentalia and Feralia in February to expel the vestiges of winter. Castiglia’s art, created with human blood, embodies personal, emotional, and creative purification and purging oneself into one’s art.

Lucien Greaves, co-founder and spokesperson for The Satanic Temple states:

“As a long-time fan of Mr. Castiglia’s art, I’m honored that The Satanic Temple’s Salem Art Gallery will now host a selection of his original works – which deftly blend horror and wonder, disfigurement and beauty – for a limited exhibition. The scale, detail and living quality of his works must be experienced to be understood, and I feel that The Satanic Temple is the perfect environment for this uniquely unrepentant visceral aesthetic event.”

The Satanic Temple facilitates the communication and mobilization of politically aware Satanists, secularists, and advocates for individual liberty. While Castiglia’s appreciation for the occult is evident in his art, he does not identify as a Satanist, or with any other one School of esoteric or religious thought, but rather understands the aims of the Temple as a progressive ideology with a positive message and intent aimed at healing particular social ills.

Award-winning surrealist VINCENT CASTIGLIA has garnered mainstream attention throughout the last decade with his shocking, meticulously-detailed art painted in human blood. Castiglia has been featured by the likes of The National Geographic Channel (NatGeo), Fox News, CNBC, BBC, New York 1 News, The Discovery Channel, New York Post, The Huffington Post, International Business Times and countless other reputable television channels and publications – most recently as the subject of a six-minute Fox News “Good Day New York” interview which featured a visit to his studio. In addition, Castiglia has created cover art for well-known albums and films, painted pieces for entertainment legends such as Gregg Allman and Margaret Cho, and was even the first American artist to receive a solo exhibition invitation from Oscar Award-winning artistH.R. Giger in the history of the H. R. Giger Museum Gallery. Earlier last year, Castiglia also made headlines after hand-painting Slayer/Exodus guitarist Gary Holt’s signature ESP guitarwith the Holt’s own blood. The guitar made its debut at the January 2016 NAMM Show in Anaheim, CA.

In the privacy of his studio, Castiglia practices a kind of modern-day phlebotomy, siphoning the life force which contains his own psychic energy, while giving it an outlet and form. In doing so, he dissolves the barrier between artist and art in a most literal and immediate sense. Castiglia’s figures, their musculature and skin, are painted with what could be thought of as “liquid flesh”. Its tendency to quicken the subjects is likely inapproachable by any other medium—as it is actual tissue with which it is being rendered. In this way, the subject’s realism is not merely an optical illusion due to its level of detail, but rather is an actual transference of flesh and blood to each work.

“With such precise technique, his depiction of human musculature is nothing short of outstanding.”

“If the body is the temple, then the heart is the altar and the blood is the sacred flame that enlightens the shrine. Vincent is painting with holy light.” – Martin Eric Ain / Musician, Celtic Frost

“The ominous truth that his art confronts, along with the exquisiteness in which it is portrayed, provides a timeless revelation into human existence.” – Joe Sopkowics, Forensic Photographer