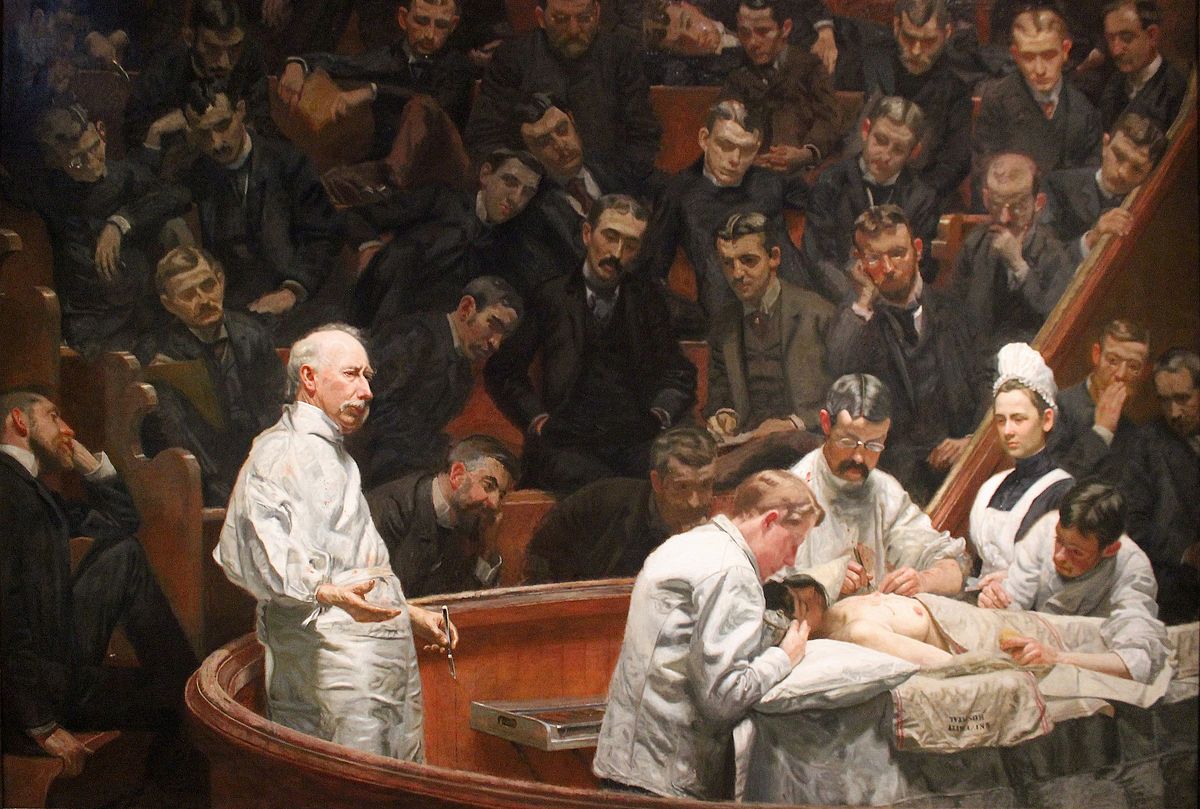 Thomas Eakins (1844-1916), painter, photographer, and teacher. Eakins, Philadelphia-born, was a painter of scientific bent, an urban provincial in the American materialist tradition, whose restricted life in an uncongenial postbellum society forced him into lonely concentration on the question of what authentic art should be. He rejected conventional painting of his time for what he considered its structural flaws and false emotion. Instead, he sought to paint the human figure in space with factual accuracy and genuine feeling. Before committing himself to art, he had considered careers in surgery and singing and never really put those options aside: his major portraits are of men of medicine and women vocalists. And his lifework consisted of profound, even obsessive, study of anatomy and perspective, two systems of nature that, properly understood and put to use, afford power to heal the body or to inspire empathetic response in an audience.

The son of a master calligrapher, Eakins grew up among intellectuals and artists, many of whom he would later paint. After a four-year stint at the École des Beaux Arts in Paris, he returned to Philadelphia for good. There, isolated from both fashionable and avant-garde art movements, burdened by psychological conflicts, and mostly unappreciated, he pressed his research into the structure of bodies through dissection and into perspective through his own system of measurements. These disciplines he taught at the Pennsylvania Academy of the Fine Arts and elsewhere. In the early 1880s, his interest in human and animal mobility led him to experiments in photography inspired by Eadweard Muybridge.

Eakins’s early studies were of his own family members in their heavily curtained drawing room. After his mother’s death, he took his bearings outdoors with meticulous studies of friends sculling and sailing on local waters. Then in 1875, he produced a work so singular that his public reputation was ruined. The Gross Clinic is a monumental work centered on a portrait of a surgeon midway through an operation. Thoughtful, even world-weary, he stands by the patient among black-coated assistants. Blood fills the incision and stains the hands of the doctor and his assistants. Various levels of interpretation suggest themselves today, but to an audience only a decade away from the surgical barbarities of the Civil War, the effect was “sickening.”

ntended for the Centennial Exposition of 1876, the painting was rejected and was hung instead in an outlying mock-up of an army hospital. In 1878, Philadelphia’s Jefferson Medical College bought it for two hundred dollars. Today it is acknowledged as one of the masterpieces of nineteenth-century art.
Eakins once wrote, “my honors are misunderstanding, persecution and neglect,” and his later work reflects both disappointment and obstinate dedication. He painted a Crucifixion, an odd subject for an artist of Quaker background. He made a number of arcadian studies of nude youths. His portraits show single figures deep in thought, posed with awkward naturalness in shadowed space. Most were rejected by the sitters as unflattering. In 1887, he painted an aged Walt Whitman. A second surgical tableau, The Agnew Clinic, though milder in spirit, was no less attacked than the first one. Only in the next generation did his work begin to win respect, first by painters of the New York Ashcan school. Robert Henri, one of that group and an influential teacher and writer, called Eakins “one of the very great men in all American art,” a judgment history accepts today.

From: Houghton Mifflin Companion to US History