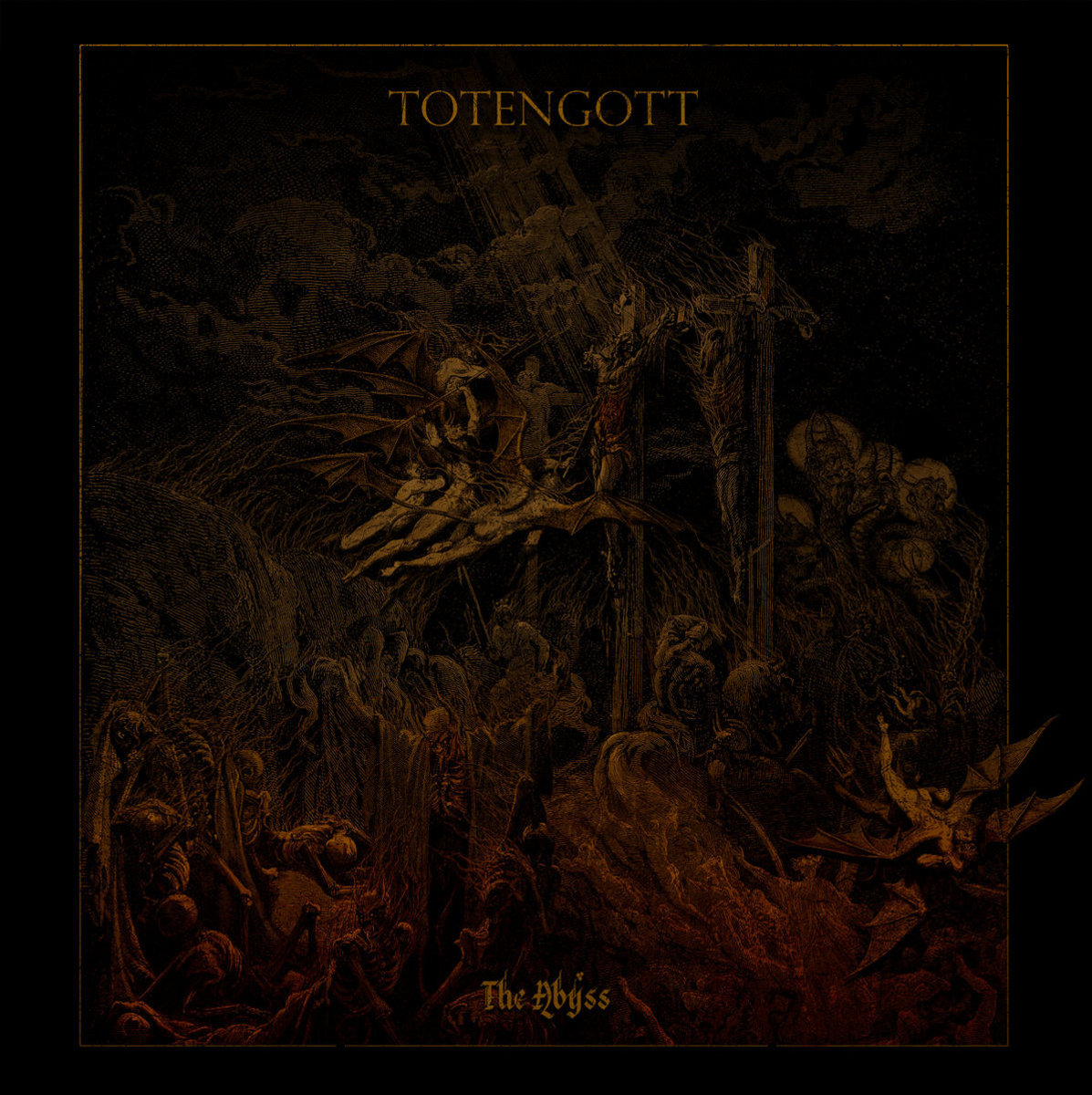 The Abyss by Jose Mora

Appearing in the middle of the currently predictable and monochrome metal scene, Totengott is formed by three experienced musicians proceeding from metal, rock and hardcore bands from Asturias (Spain) with the aim to release the darkest songs that they are able to write and to claim the importance of evil and morbidity of compositions above technique, as well as rawness above demonstration. From a musical and philosophical perspective, the band drinks from sources like the heaviest side of Celtic Frost, the raw and epic side of Bathory, the atonality of Kryzstof Penderecki, the sonic gravity of Conan and the texture experimentation of early Pink Floyd. Totengott avoids limitations in the way they understand music.

The release of ‘Doppelgänger’ in July 2017, their first album, served to place them and to introduce them to the international metal scene. After gathering many positive media reviews, the band-shaped a solid fan base in every place where they performed with their raw and visceral live shows. So far, Totengott has played live in seven different countries and has shared the stage with bands like Obituary, Inter Arma, Sodom, Suffocation, Master, Entombed AD, Minsk, Stoned Jesus, Nifelheim, Holy Moses… They also performed in festivals such as SWR Barroselas Fest (Portugal), Otero Brutal Fest (Spain), Mutant Fest (Spain), Wolfest (Spain)…

Their second album, ‘The Abyss’ was released on 16th April 2019 via Xtreem Music and Burning Wold Records in CD, vinyl and digital formats. The release of the album, considered one of the best metal releases of 2019 in several webzines and magazines, was followed with their first European tour, having the band playing in Spain, France, Germany, Netherlands, Belgium and Switzerland during the fall. ‘The Abyss’ confirms Totengott candidacy to be one of the new hidden gems in the underground European metal scene.

If we had to choose one word to define Totengott’s music, it would be “darkness”. We don’t really fit into one specific kind of metal or music genre, you will hear echoes of doom, death or black metal in our music but also influences from progressive rock, gothic, noise, ambient music… Our goal with Totengott is to write dense, dark, epic and overwhelming stuff and we don’t do it thinking about styles or scenes. That would only be barriers to our creativity and artistic process. Open-minded listeners looking for some intense experience would dig our releases.

‘The Abyss’ is our second album, released in April 2019 via Xtreem Music and Burning World Records. From our point of view, the album takes all the good stuff in our first record ‘Doppelgänger’ and brings it to a whole new level. The heavy parts are heavier, the doom stuff is denser, there is more ambience and the epic parts are more epic. Most of the album was already written when ‘Doppelgänger’ was released so we had the chance to play the songs live before recording them, arrange them as much as we wanted to and to get the best of them. A lot of the stuff in the album came pretty finished from home demos that Chou wrote at his home studio, while others as ‘The Spell’ was re-arranged and re-approached several times in the rehearsal space.

Even though ‘The Abyss’ is not intentionally a concept album, we realized that there is a bit of a general theme in the lyrical and artistic part of the record. We try to make our lyrics not too cryptic, but also not extremely obvious so they are still open to interpretation by the listeners. The “concept” that unintentionally can be found in the album lyrics is about the sense of duality: life/death, good/bad, love/hate…

Regular life stuff inspires us. Our music is part of who we are, and the bright and dark things in our life and the world that surrounds us definitely have an influence in the way that we write and perform our music.  We don’t really have a fixation, and as answered in another question, all that surrounds us, especially all the darkness and evil around us, can work as a focus of inspiration for us.