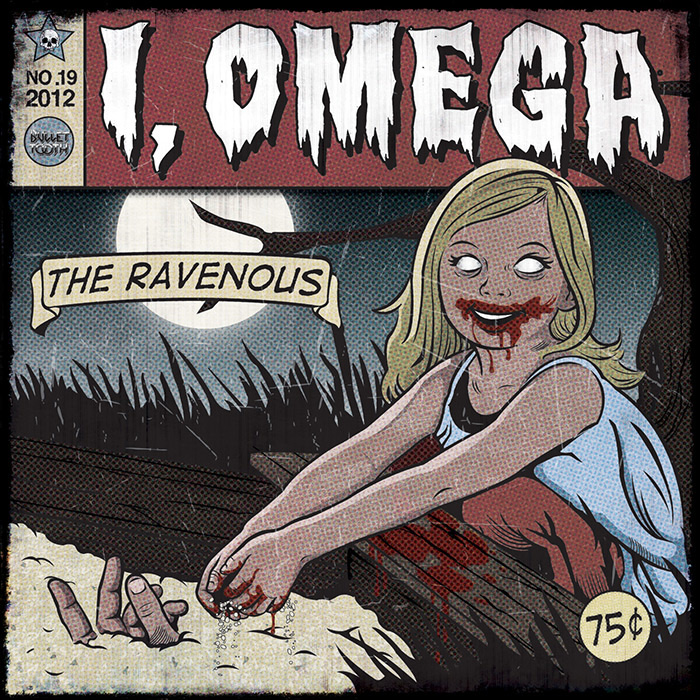 The overall concept for the cover, including the scene of the little girl with a bloody mouth came from I, Omega vocalist Clay Nevels. He wanted to illustrate the idea that any one of us can be “The Ravenous”. Passion for music, art, life etc can make someone ravenous, but so can greed, fear and jealousy. We are all consumers and often times pay little mind to the consequences of overconsumption. In terms, of visual style, that was entirely left up to the designer, Travis Roberts.

First reaction when hearing the music

I was very impressed with the musicianship upon my first listen to the record. The instrumentation is very complex and Clay’s vocals soar above everything. Musicianship and songwriting are the focus of this record, rather than simply focusing on being heavy and brutal for being brutal’s sake. Which is something many modern metal bands unfortunately fall into. So I wasn’t concerned with making the artwork overly dark or foreboding.

I’ve always been influenced by horror comics from decades ago like Tales from the Crypt and Chamber of Chills. It’s a style that’s fairly underutilized when it comes to metal art. The music on this album was unique, so I wanted something that would help it stand out. This was my chance to explore that style.

The lyrics of “The Ravenous” deal with what makes you hungry in life. It could be a passion for a craft, one’s family, or life itself. But people can also be made hungry by money, greed, hate, and jealousy. This can easily be interpreted as a commentary of our consumer culture and how we constantly crave more and more, whether it be energy, money, entertainment, food, etc.

“I wrote this song while gnawing on the bones of my heroes flossing my teeth with their locks wearing their skin as robes.”

These lyrics can be referencing that craving and how we are unconcerned with its consequences, trampling our heroes to get what we want. The idea behind the cover is that anyone can be “The Ravenous” no matter how young or old, it all depends on what drives that hunger within.

The original concept was for the cover to be photorealistic, utilizing actual photos and textures. However, after some initial rough drafts, this style didn’t seem to be working, both as a concept, as well as relating to the music. After some research, it was agreed that designing the cover in the style of an old 1950’s pulp horror comic would fit the gruesome lyrics without taking things too seriously. Using this style for the cover would also lay down the concept for the lyrics, liner notes, band photo, and tray card. It would all be presented as a comic book from cover to cover.

Once a few rough sketches for the comic book style cover were shown to the band and management, they were immediately on board and everything easily fell into place rather quickly. From an artist’s perspective, I, Omega was a joy to work with.

The record was released as both CD and digital formats. The horror comic concept was kept for both, as the cover, lyrics, band photo, liner notes and track list were presented as a comic book from front cover to back cover.

www.punkworldviews.com/i-omega-the-ravenous-album-review – a review of the album, track by track