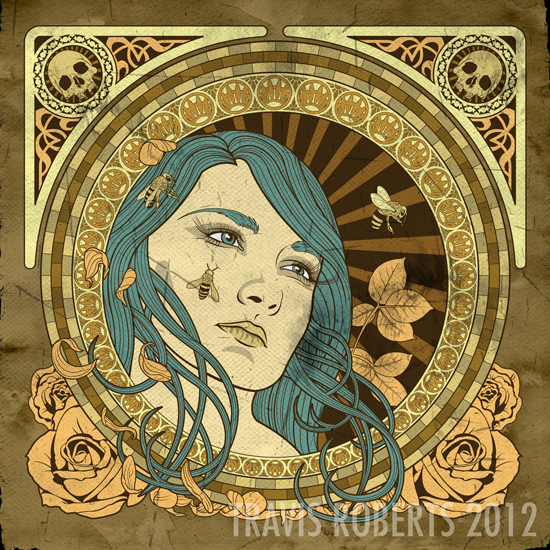 Travis Roberts: Between the beautiful and the grotesque

I’ve been drawing since as far back as I can remember, redrawing comic book panels, horror movie posters, and record covers to show my friends and family. My parents met in art school in NYC so art was something I grew up with. My formal education came from Rowan University in Glassboro, NJ, where I received my Bachelor of Art degree in 2009. After graduating, I began interning at Trustkill Records in Tinton Falls, NJ. I started out doing animated banners and small web ads, and eventually worked my way up to doing record covers and merch designs for them on a freelance basis.

My technique varies, depending on what I’m designing for. However, every project begins with tons of research in order to get inspired and find a style and subject matter that fits. Most of the time I’ll do some rough sketching and also do some quick mock ups in Photoshop. I have a small studio set up in my apartment that includes an iMac, Wacom tablet and drawing board. I also have charcoals, acrylic paints, colored pencils, and a variety of art pens on hand should inspiration strike. On my computer I mainly stick with Adobe Photoshop & Illustrator as my go-to programs.

Some bands will give me complete control to do pretty much whatever I want, and some will have a precise concept that they just need executed and aren’t willing to compromise. I usually find the best result comes when both the band and I collaborate equally. For example they come up with a general concept and allow me, as the artist, to bring it to life in the most fitting way possible.

I guess my philosophy all comes down to balance. I like the idea of presenting the macabre in a beautiful way and vice versa. Creating that contrast between the beautiful and the grotesque makes each aspect more visually striking, and also creates a balance that makes the overall piece more interesting. Visual art and music go hand in hand, as one can easily inspire the other. Whenever I design, I always listen to music, as it helps me feel more creative. You simply can’t have one without the other.

Symbolism is a huge part of my work. Almost all of the imagery I use has some sort of symbolic meaning to me however precise or vague it may be. Although I sometimes try to give different meaning to what something is commonly symbolic of. Skulls and bones don’t always represent death to me, for example. They could represent an idea in its most basic form, the end of a chapter or the beginning of another. But at the end of the day it’s for the viewer to decide what it means to them.

As a huge fan of metal, I’m constantly being inspired by the cover art of the records I’m listening. Metal record covers are one of the reasons I became an artist in the first place. So just being a fan of metal is research in and of itself. I’m able to see what genres utilize certain styles of art and what trends are popular among bands these days. That being said, it is important to keep some degree of originality and not just follow those trends.

In terms of styles of art, I’ve always been influenced by art nouveau. But I also am hugely inspired by music (namely heavy metal of course), horror films, tattoo art, old pulp horror comics, and the works of H.P. Lovecraft, to name a few. It’s not quite a metal record, but ‘Fight With Your Fists’ by Kid Liberty is probably my favorite cover I’ve done so far. It more or less depicts a bar fight, but because of the colors and the clean line work, there is a definite light heartedness as well. It fits the musical style of the band really well I think; heavy riffs mixed with fun, catchy choruses.