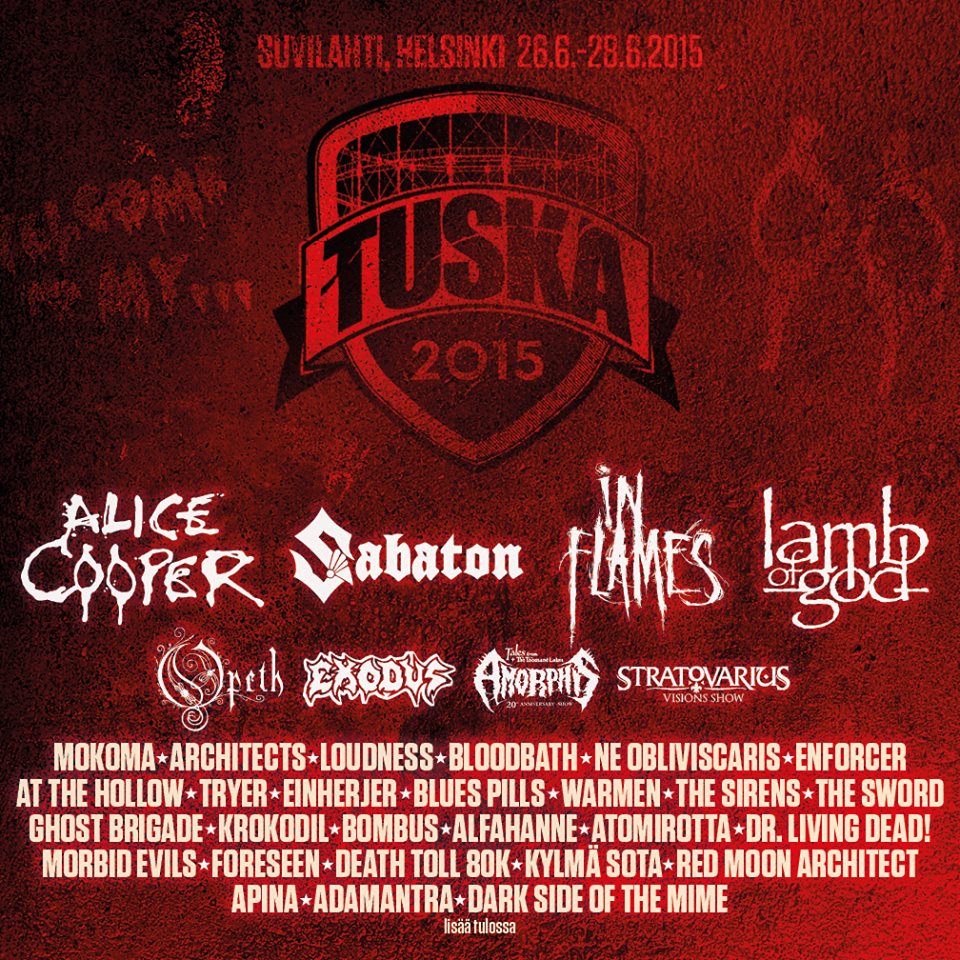 It took a little preparation but now I was armed and ready to enter the gates of Tuska (translated ‘pain’, ‘agony’) Open Air Metal Festival once again in Helsinki, Finland. Like last year there were masses of metalheads showing off their best outfits and makeups. Bands like Abbath gathered many corpsepainted human gargoyles out of their nests to throw devil horns high up in the air. This year Tuska offered a bit more variety in their band list than last time. For example Swedish blues-rock-oriented Blues Pills which was really amazing but a bit off their league to entertain metal maniacs in pure daylight. There were also two rap metal bands who probably gained a few fans more based on their performance. Other bands included Alfahanne, Sotajumala, Dr. Living Dead!, Krokodil, Loudness, The Sirens, Warmen, Enforcer and many more. Altogether 42 bands. Main acts for each day were Sabaton, In Flames and Alice Cooper. Quite remarkable variety of bands so it is almost impossible to check out every single act. On the other hand it is more reasonable to pick your favourites and create your own festival timetable. There was over 25 000 metalhead attendance throughout the whole weekend so Tuska still holds the position of being one of the biggest fests in Northern Europe.

Friday’s first main act was Architects who delivered a fresh performance despite their early slot. Band is probably not that well known in Finland but still they gathered a great audience. Their complicated metal- and mathcore was a great wake up call for people and you could see song by song more and more fists pumping in the air. Then it was time to slow down a bit and check out Blues Pills psychedelic rock act. The magnificent singer Elin Larsson really can hit a variety of scales and her sound has more depth than a fiery hole in Hell. After a pint (or two) it was time to see a band who was already three years late on stage. Lamb of God had to cancel their Tuska-performance 2012 because of the unfortunate happenings in Prague and singer Randy Blythe’s lawsuit. Now the band was ready to kick ass demons from the past. They played amazing set with full throttle and remembered to apologize their missed show even though you can’t blame the band for it. Lamb of God even succeeded to create a huge pit in front of the stage. Thumbs up and thank you LoG!

Mighty and bonded by blood Exodus was up next. Steve Souza is back and giving new boost which was seen in bands performance. Their setlist included “Bonded by Blood”, “Piranha”, my personal favourite “Blacklist” and “Strike of the Beast” as an ending song. Exodus threw extremely thrashy performance and it was great to witness how the band is still in very sharp shape. Then it was time again for some Swedish stuff. Europe’s “Final Countdown” was blasting through speakers so you were sure what’s coming next. Based on audience reactions all over the venue Sabaton played like they have never played before. This was the first, but I can guarantee not the last, time I’m gonna see this band live. Their stage presence with an actual tank and army outfits combined with blasting fire effects and fireworks guarantees no one will leave the area unsatisfied. Sabaton truly were responsible for the best performance of the day and it was great to end my Friday and head back home.

Unfortunately I couldn’t attend on Saturday yet I collected some feedback from my friends during the day. Amorphis played their classic album “Tales from Thousand Lakes” and indeed it still sounds as fresh as before. Other mentioned performances were from Bloodbath, Loudness, Abbath, Sotajumala and Saturdays main act In Flames. Sunday bloody Sunday. This time really sunny, warm and filled with great bands. I just got the venue to witness Warmen’s last war hymns. Another Finland’s finest was up next in a form of Mokoma who plays Finnish thrash with a hinch of radio friendly sounds combined. No harm done and Mokoma proved why they have had a few no. 1 chart positions in Finland.

Up next was some true beauty and harmony when The Sirens entered the stage. Anneke van Giersbergen, Liv Kristine and Kari Rueslåtten sang like real sirens from ancient mythology. I was afraid I would get lured and ripped apart but that would been the most pleasant way to end my Tuska festival. Luckily I survived and was able to witness Opeth’s show that was up next. They probably had the most boring beginning of a show I have ever seen but otherwise they proved their talent and skills of great performance. A reminder for me: listen to more Opeth. In a year 1997 I was 18 and while singing Alice Cooper’s “I’m Eighteen” I also listened to Finnish power metal band Stratovarius (this was also 18th Tuska festival and I drank 18 beers during the weekend, visited toilet 18 times per day, saw 18 dreams about The Sirens… talking about numbers and meanings…). It was a year when their cornerstone album “Visions” was released and tonight it was played in its entirety. Band gave mighty performance and Timo Kotipelto is still in a very good shape to deliver all the notes. “Black Diamond” was the perfect ending to Stratovarius concert.

Alice Cooper was the highlight for Sunday. I had my doubts how his voice can still hold older songs but Alice had no problems. Alice and co. played really tight and the atmosphere throughout the show was marvellous. Alice played all the hits and some cover songs from The Who and Beatles. Over 20 songs was enough to keep everyone happy and as known Alice Cooper’s stage show has strong visual elements. Too bad there is absolutely zero chance to scare anyone anymore in 2015 but Alice’s act is still very enjoyable. Even Michael Monroe shared the stage with him which was a nice surprise. A perfect way to end this perfect weekend!

Unlike last year the weather was nice and sunny. Not particularly hot but it didn’t snow either. I gotta say it is not necessarily bad thing to have gloomy weather when bands like Alice Cooper and Abbath are performing. All the sun and light really takes an essence away from the act. But if it would’ve rained, I would bitch about that too. Talking about being never satisfied. Tuska is very well organized and the press area was inside this year, thumbs up for that. I didn’t see any metallic disruptions and all the bouncers of the area probably had an easy task to maintain order. I’ve understood there has never been any bigger troubles in Tuska festival. Metalheads are scary but well-behaving people. Beer was too expensive (of course) but lets not get to that. There was a good food variety even though the kebab I ate was not the best one. Next year I’ll go to Black Dining restaurant. This year there was also a possibility to go to a sauna which held like 30 persons at time. Great idea and next year I’ll pay a visit there too. It was great so see such variety of people attending to shows. From little kids to grandma’s! This is what metal is all about. Togetherness, acceptance, tolerance and friendship. Happenings like Tuska will maintain the power and meaning of metal and make the world a bit better place. Thank you and see you next year!

I would like to dedicate this article to honour a metal friend Tasos Laurentiadis who passed away during Tuska weekend. I will never forget you. We Are One. RIP m/