Twitch of The Death Nerve 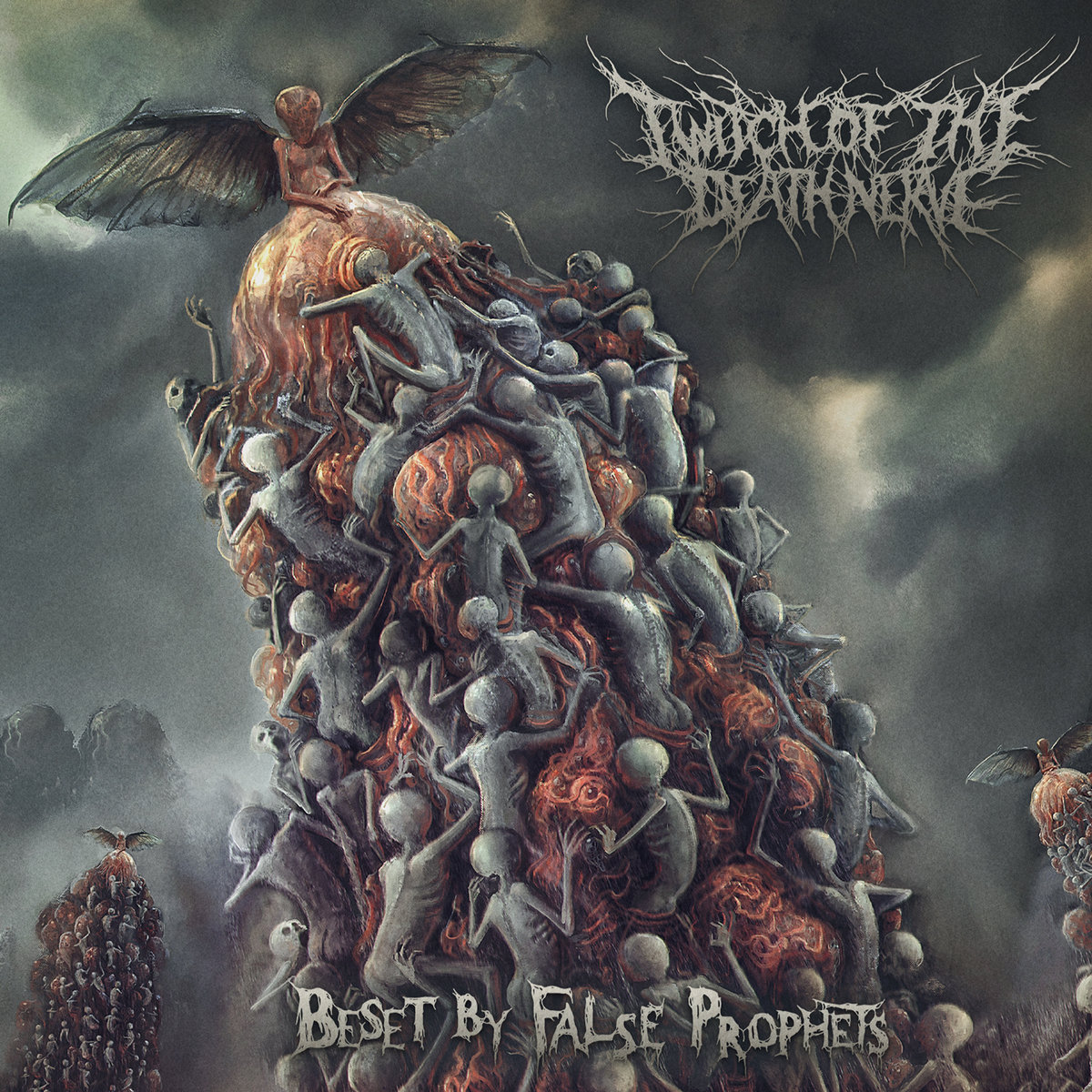 ‘Beset by False Prophets’ was born during the first lockdown period in the UK for Covid. We had just released our first album with the new line-up, and suddenly all of the gigs we had planned were being cancelled. We decided to make the best of the downtime, so we started working on the EP. The creative process was a little different from usual as Mauro had some drum patterns that he’d worked on for another abandoned project, and we decided to use them and write tracks around them. We’d written a couple of tracks around improvised drum parts before but never for a whole release. It was a cool change of direction for an EP, and some stuff came out that we probably wouldn’t have written otherwise.

In the past, I struggled with lyrics. I treated them as necessary and generally found them a chore to write. However, I found my style in recent years and started to enjoy working on them as another aspect of the creative process. I wanted to steer clear of writing extreme or offensive lyrics for the sake of it and make sure that everything is a true reflection of my worldview, albeit at a heightened level. The general themes are around nihilism towards the human individual and the corruption of society as a whole. Often there will be a personal resonance for me, mixed in with a wider theme, but I like to make sure the lyrics are abstract enough so that they aren’t that clear to the reader. I’m writing them for myself. ‘Beset by False Prophets’ has a theme running through all the tracks about institutions or individuals who spread falsehood.

Each record has had a very different approach, to be honest. The band began as a side project, and so we pieced together the tracks for our debut album over several years before recording them. Once Mauro joined the band, and it became a full line-up, we wanted to put something out as soon as possible, so we wrote ‘A Resting Place for the Wrathful’ pretty quickly to show people we were back in business. As I mentioned above, ‘Beset by False Prophets’ had a different approach again in writing around Mauro’s drum parts. We’ve already started working on the next album, but I think this will be a longer process, as we want to take the time to make sure we can top people’s expectations the next time around. We write with an album in mind, so there will be a conscious effort to write tracks with different tempos and create breaks for the listener to avoid boredom setting in.

The music is a reflection of my philosophy. It’s an expression of my pessimism about the human race and the injustice, corruption and exploitation in society. Although I’d like to think I’m tolerant and respectful of people’s personal beliefs, I am very much anti-religion and see it as a harmful force in the world. I’m not sure if scientism implies a fanatical approach to science, but I definitely believe scientific and statistical analysis should unpin the decisions we make as a society. I understand science to be the pursuit of truth and understanding through evidence, whereas the things I stand against – religion, pseudoscience, conspiracy theories – are about refusing to look at any new evidence once you’ve found a narrative that you like the idea of.

I don’t remember a particular life-changing event but a slippery slope that kept descending towards the more extreme. The first bands I was obsessed with as a kids were Guns N’ Roses and Iron Maiden. From there, I got into heavier bands like Slayer, Pantera and Sepultura before finding death and black metal and feeling like I found the pinnacle of extremity. In the days pre-internet, the big milestones would be finding a new window into the genre, like discovering Metal Hammer magazine for the first time and finding dozens of new bands and subgenres to check out. I remember finding an Earache sampler in a record store and discovering Brutal Truth, Bolt Thrower, Entombed and Carcass all in one go. Later on, I had a similar experience finding a zine called Vaginal Vomit with a tape that had Devourment, Vomit Remnants, Vile and Scattered Remnants on, all of which remain favourites to this day.

Music is definitely a huge part of my life, to the extent where I feel like it’s woven into my sense of self. As a cynic and a rationalist, I guess the things in my life that get closest to a spiritual experience would be music, art and film. I think you can demonstrate how important it is for the world by seeing how many people rush to spend their free time indulging their passion for music the moment they are freed from their work and responsibilities.