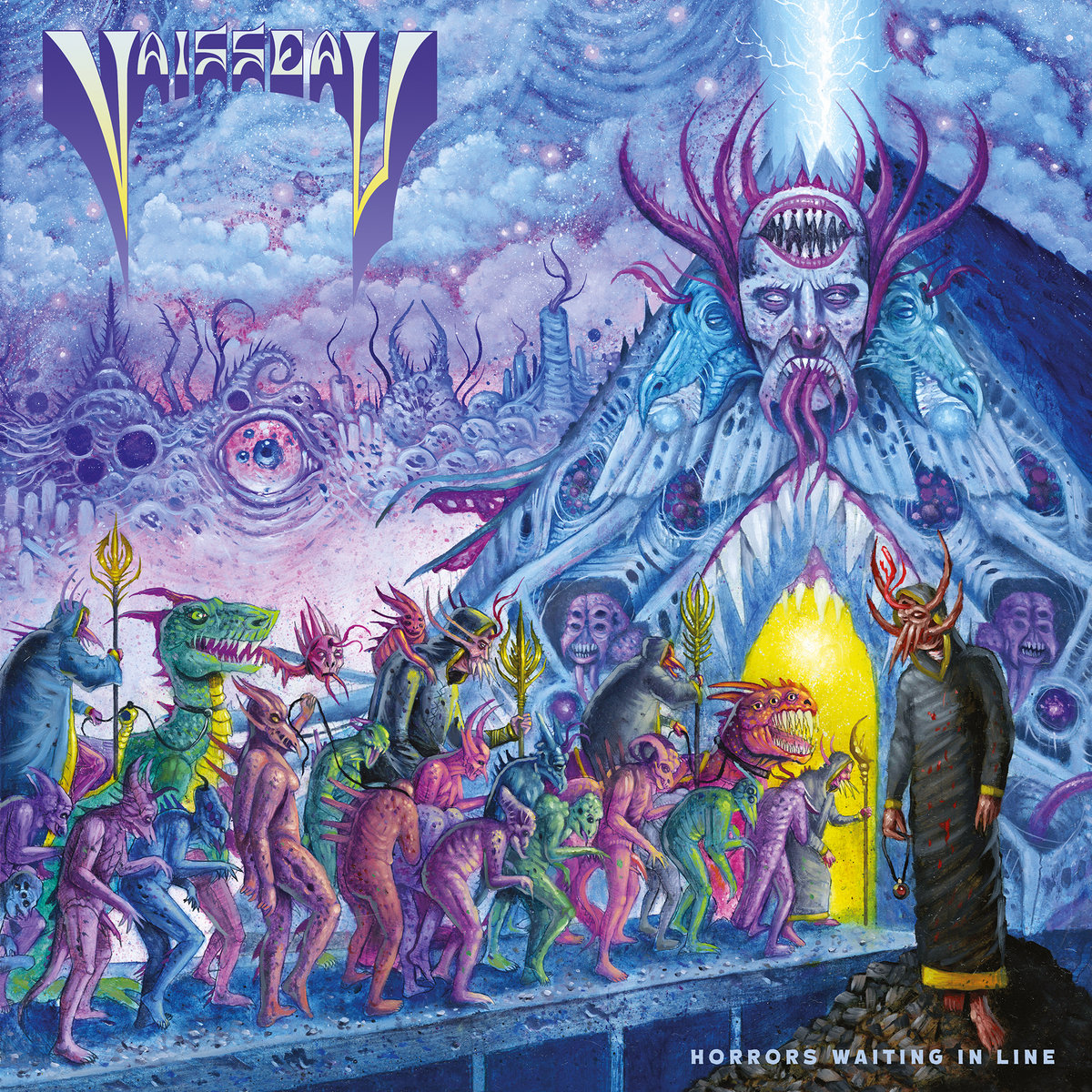 Vaisseau craft their very own sonic way out, both distraught and intense. The French duo confidently matches doom and krautrock, laying their haunting synths at the centre of the action. Tangerine Dream outrageously flirting with Black Sabbath and satisfying any fiend of dark, proto-prog soundscapes. Vaisseau doesn’t need guitars, only slow, obsessing loops that will take your mind to a chaotic sci-fi universe. The unwavering drums-machine duo has created a genre of its own, that we will most aptly name “synth doom”. Vaisseau’s debut album ‘Horrors Waiting In Line’ is set for release on March 17th via Totem Cat Records (Dopethrone, Sons Of Otis, Fistula). The artwork by Jason Barnett (Fistula, Power Trip, Ghostmane) depicts the daily struggles one learns to apprehend and overcome. Another subtle reference to escapism that floats atop the whole album reaches peaks thanks to its majestic pyramids. This symbolic vessel guides lost souls towards the light.

Vaisseau is the french word for Spaceship. Cyril and I were smoking weed and messing around with a couple of names and finally came up with Vaisseau. It started as a joke, but we both realised quite fast it would be a perfect match for this project. The title ‘Horrors Waiting In Line’ is a simple metaphor about the endless trials we face during our lives.

We listen to a lot of stuff, but for this album, Cyril was heavily inspired by the Berlin school and early electronic music, Tangerine Dream, some more recent stuff like Zombi, and my drumming was inspired a bit by Saint Vitus. We also listened to a lot of Hawkwind & Blue Öyster Cult at the time so it must have impacted us somehow.

We felt we didn’t belong to any genre in particular. We haven’t invented anything, but the synth doom tag is more like how we approached the making of the album. This shouldn’t be taken too seriously, even though we were inspired by electronic music and doom metal a lot. It’s a key to the comprehension of the album, nothing more.

There are no vocals/lyrics in Vaisseau. The titles were important if we wanted to convey at least some sort of ideas to the listeners. But then again, it’s instrumental music, and you can interpret things as you like.

The painting for ‘Horrors Waiting In Line’ was done by Jason Barnett. It’s a literal interpretation of the title, and it depicts a procession of monsters waiting in line to get inside the spaceship. We wanted something a bit different, Jason is well known for his Power Trip logo, and did many metal covers throughout the years. We wanted something scary and trippy at the same time, and I think he did it right. When he started working on it, he told us he was listening to a lot of Zeuhl and weird prog stuff to get in the mood.