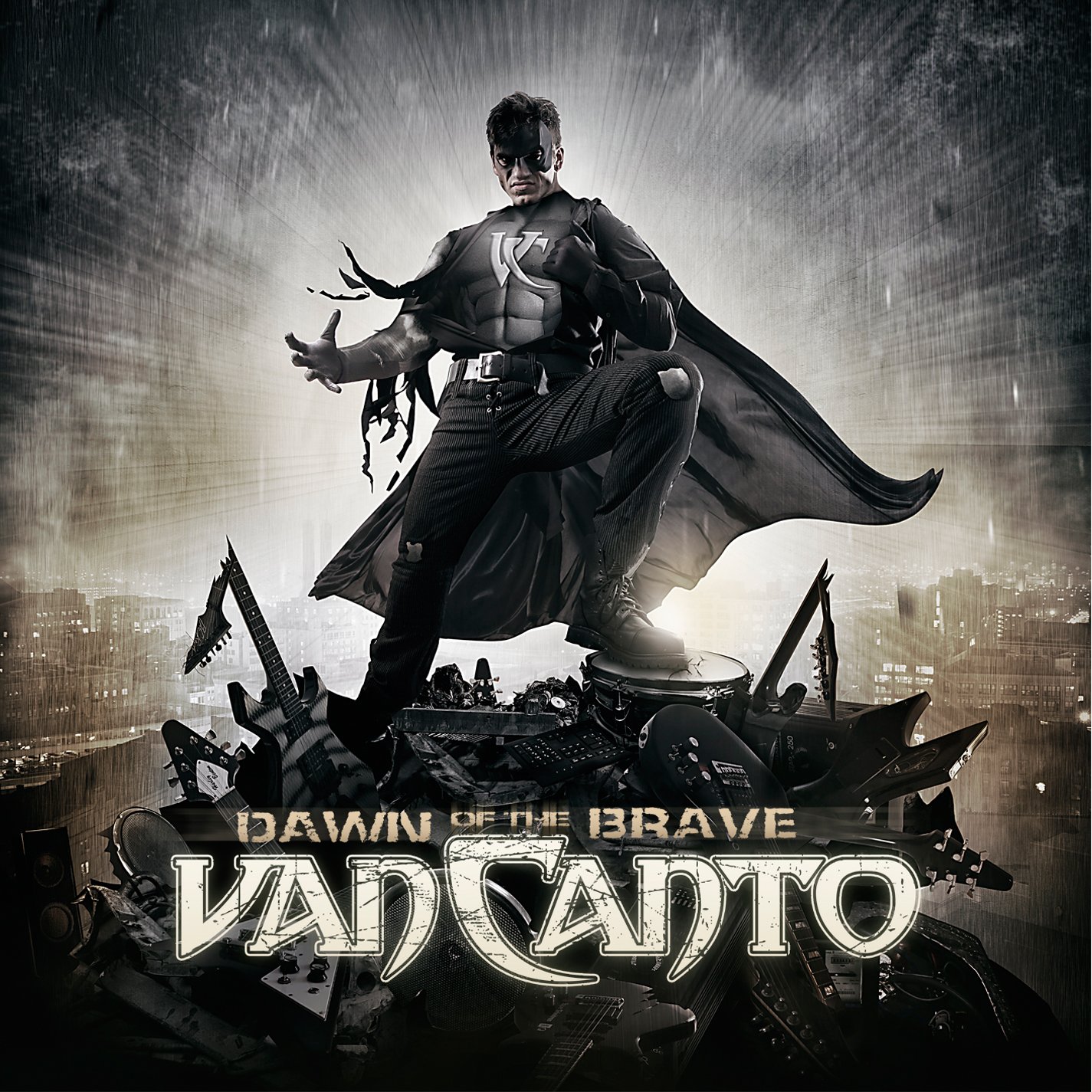 Interview with Superheroes of metal a cappella

Take five singers and a drummer and set up a power metal band. Not an easy task to do yet this German quintet Van Canto has become a pioneer of what they call “hero metal a cappella”. A new sub-genre is born to the already pretty full field of heavy metal. HeavyMetalArtwork.com decided to find out how this all happened and is there still room for one sub-genre.

HMA: First of all I would like to thank you on behalf of the metal community to create something new to the genre. By combining a cappella and heavy metal you have something pretty unique in your hands. For those who do not know yet, how did the idea came up?

Stefan: Thank you! After the split of my former band, I wanted to do something vocal oriented. I asked some friends, we tried some things in the studio and it turned out to become the world’s first metal a cappella band.

HMA: Do you guys have any specific training in using your voice? Or any academic sort of background?

Stefan: No academic background and the only thing to train is not to breathe at all. This is the most important thing when imitating guitars, is that you have to keep the breathing gaps very short to have this constant and continuous feeling of a guitar sound.

Ross: It’s a lot of sport, but you just got to make sure that you take a big, deep breath at the very beginning of the note and don’t let it out until the notes finished, but that just takes years of practice. There’s no special training involved.

Stefan: Someday it works better and someday it doesn’t because if it’s too hot in the club then even we have to breathe from time to time.

HMA: Would you say that you’re kind of developing your own technique as you go along?

Stefan: Yeah. There are not so many vocal coaches around telling you how to sound like a guitar so we have to do it on our own.

HMA: Surely you must have artists which serve as an inspiration to what you do. Not necessarily in the metal world.

Ross: The singers, as such. Not the style that we sing.

Stefan: Not necessarily because I think the most important thing concerning inspiration is more about songwriting or about the metal style itself and not about the a cappella arrangement because there’s no metal a cappella band around so we have to do it on our own. But if you take a look at the bands and songs we are covering, then you have a good idea about the bands that are also an inspiration for the way of writing songs and arranging songs.

Ross: The way that we sing the songs or perform the songs, there’s no inspiration there because there’s no one that we can compare what we do too.

HMA: Because most of the guys in the band are all vocalists, except for the drummer, are there any parts of your music that you feel like it requires more training or more practice to work together as well?

Stefan: It’s hard to tell because we’ve been doing this for eight years now and it’s the fifth album.

Ross: The first three years we were practising quite often. That was necessary, I suppose because that was the initialization of the entire concept. It’s become more of a habit now.

Stefan: There also have been big changes from the first to the second record, but right now we know what we’re doing. There aren’t big changes anymore. Feels more natural to do it.

HMA: Would you say that you use your voice as instruments?

Ross: On stage we do, definitely.

Stefan: Of course, if you asked the lead singers they would tell a different story, but for Ross, and me we definitely think like playing the guitar and then sing it.

Ross: I have it in my mind as well when I’m playing a chord; I’ve got this image of me standing there.

HMA: You also both play some sort of instrument.

Stefan: We are both guitar players. It makes it a lot easier to play the notes. I never managed to play solos as fast as I’m able to sing them. Finally, I became…

Ross: The solo guitarist you always wanted to be.

Stefan: Yeah. You can put it that way.

HMA: Do you use any specific type of microphone? Something that is sort of a more sensitive microphone or a microphone that is more specific to what you do?

Stefan: Well it’s less sensitive so it’s more feedback resistant. Because as soon as you have five singers on stage, everything is amplified through the microphones again and again. We have microphones that only capture the sound that comes right from in front of the microphone.

Stefan: And not from the side. This is a regular vocal microphone, it’s nothing special.

Stefan: No, no. It’s a dynamic microphones.

HMA: Even for recording?

Stefan: No, for recording we have regular studio microphones because then we only play with headphones on and we record every singer after each other so we don’t have any feedback problems.

HMA: Okay. You also do your own background vocals.

Ross: Or we call 200 fans and let them do the background vocals as well. On our last album, we just asked for a few fans to turn up and there were 200. We thought that’s cool.

HMA: And all good singers?

Stefan: There were good singers among them but it was more like shout choirs, like “fight” or “badaboom. They all need to be loud and we expected about 30 people and then 200 people showed up. We had a gig on the same day. A lot of them were in the crowd as well and they were singing along but not on the stage.

HMA: I would like to ask about the covers. I like most of them. The one from Bonnie Tyler, how did you choose that?

Stefan: This is the one that it fits into the album concept. We did a lot of metal covers and we wanted to expand a little bit and do some hard rock covers as well, so we thought Final Countdown and Bonnie Tyler would be good choices. Metalize some hard rock songs.

HMA: I don’t like the original so much, but somehow you made a pop song into a cool metal song. (laughter) You know what I mean? It was a contrast of emotions. It works.

Stefan: You don’t have to like it at all because it’s just an offer from us to show people what a cappella can be like. It’s easier to understand a cappella if you at least know the song and you only have to get used to the new sound. So that’s the idea behind the covers.

HMA: Would you say that doing covers serves as an introduction to metal fans to your kind of style?

Ross: Battery was the main song, right at the very beginning, that got most recognized and people actually thought we were a cover band although there was only one cover on the entire CD.

Stefan: What people often tell us is that they have the covers that they get to know Van Canto and they come back again for the original songs. So that’s a good thing for us, we have covers to say ‘hey this is metal a cappella’. Then we have our own songs to tell ‘hey we’re songwriters as well’. It works quite well.

HMA: It works in both ways. Obviously, you also write your own music compositions?

HMA: You must have some kind of training.

Stefan: Of course, the training of composing is writing songs.

Stefan: I’ve been writing songs since I’m 13 or so. At the beginning of Van Canto, I wrote most songs on piano or guitar and then translated them into metal a cappella. Right now we are even able to write songs just directly by singing them.

Ross: Break the Silence was written life, so to say, it was recorded live as well because we went in the studio and we didn’t really have any idea what we were going to sing. We got there, tried a few vocal techniques and it worked.

Stefan: We arranged the songs while being on tour, so there were a lot of voices arranging just by doing it and not by thinking too much.

Stefan: And we had more time to work it out. We didn’t have so many live gigs while recording.

HMA: The theme for this, your current album, is heroes.

Stefan: Superheroes… And to make the listener feel like as a superhero.

HMA: Do you have any favourite superhero that you aspire to? Not necessarily in the comic book world, but in life in general.

Ross: My mom and dad. I would suppose because they’ve been through a lot and I wouldn’t be here without their endless help, to be quite honest, or this far. I do see my parents as heroes, definitely. But in the fantasy world, it’s Spiderman.

Stefan: I really think, for me, heroes are those people that always have done what they wanted to do. Especially when talking about musicians, there have been many musicians playing metal or hard rock even if 99% of the bands were supposed to play grunge. So my heroes are all those bands that stick to their kind of music just because they loved it. We have to do the same because there are many people around telling us that metal a cappella is not worth listening to or anything so we like what we’re doing, we love it!

Ross: But then we go to concerts and see that the place is full and we go, “We don’t care what they say.”

HMA: It’s definitely unique and I love it. Last question… about your artwork. Stefan Heilemann did your last cover. He’s incredible. Did you give any direction?

Stefan: Yeah, we had the idea of the superhero concept so he came up with a style. He did everything from the photo shoot and the front cover and the booklet artwork. He did a great job.

Ross: Came up with the idea of the broken instruments with the guys standing on top of them.