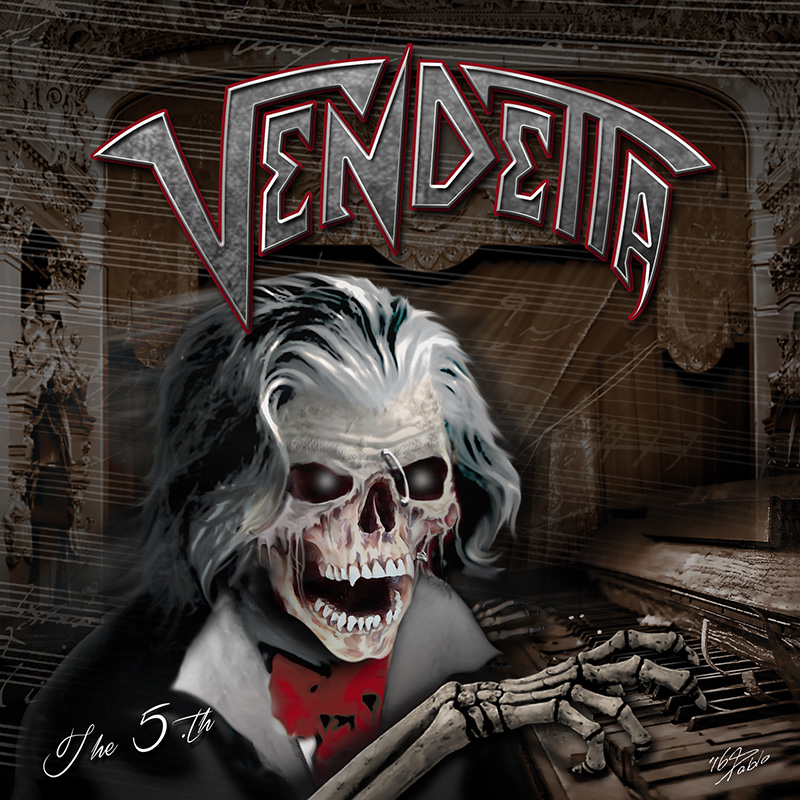 Back to the roots

Founded in 1984, and after the release of two self-recorded demos, “System Of Death” (1985) and “Suicidal Lunacy” (1986), the band’s debut “Go And Live… Stay And Die” followed in 1987. A year later, the second album “Brain Damage” was released and distributed by Noise International. In 1990 the band split up, but reunited in 2000 and recorded the demo ‘Dead People Are Cool’ in 2003. In 2010, Vendetta entered the studio to record their 4th album ‘Feed The Extermination’, which was mixed and mastered by none other than Dan Swanö at Unisound Studio in Örebro, Sweden. The band signed with Massacre Records and released the album in 2011. Now, in 2017, Vendetta is back with a brand new album called “The 5th”! It is, indeed, the band’s 5th studio album – and it’s time for uncompromising, mind-blowing thrash metal!

Musically, Vendetta go back to their roots: The songwriting is more aggressive again. But you’ll also find many progressive guitar riffs and a lot of kick-ass guitar soli. The lyrics once again have a socio-cultural theme, and a few of the seven deadly sins – like envy, pride, wrath, greed or gluttony – will play a role. You can expect catchy songs like “The Prophecy”, fast thrash songs like “Let ‘er Rip” or hymns like “Religion Is A Killer”.

“The new album is more like going “back to the roots”. All songs written, composed and recorded (Bass & Rhythm guitar) by Klaus “Heiner” Ullrich, all Lead guitars recorded by Frank Heller and Michael Opfermann, except ‘Nevermind’ and ‘The Search’ has been written, composed and recorded by Frank Heller. Drums as always by Thomas “Lubber “ Krämer. After changing the line-up (Frank Heller is back and “Opf” joined the band) we were able to work with two guitar players. But it took time after Frank Schölch has left the band. By the way, it was the first album fully generated or formed in the studio, but now we`re glad to throw it out and Frank Heller is also doing lead vocals on ‘Nevermind’! After the last 3 albums, I think the fans will recognize directly at first sight.

The album cover was an idea by Heiner and Pablo, they do all the shirts, slips, banners and cover artwork while talking about the new album. It’s our fifth so it grew up by that theme and the guy`s face is similar to the ‘Feed the extermination’ cover and the ‘Hate’ album. No direction, It just happened.

We always want to use brand new themes in our lyrics, from today, from life, social critics, and things that could happen to everyone. Some of the lyrics are by Achim “Daxx” Hömerlein again, and some are by myself.”