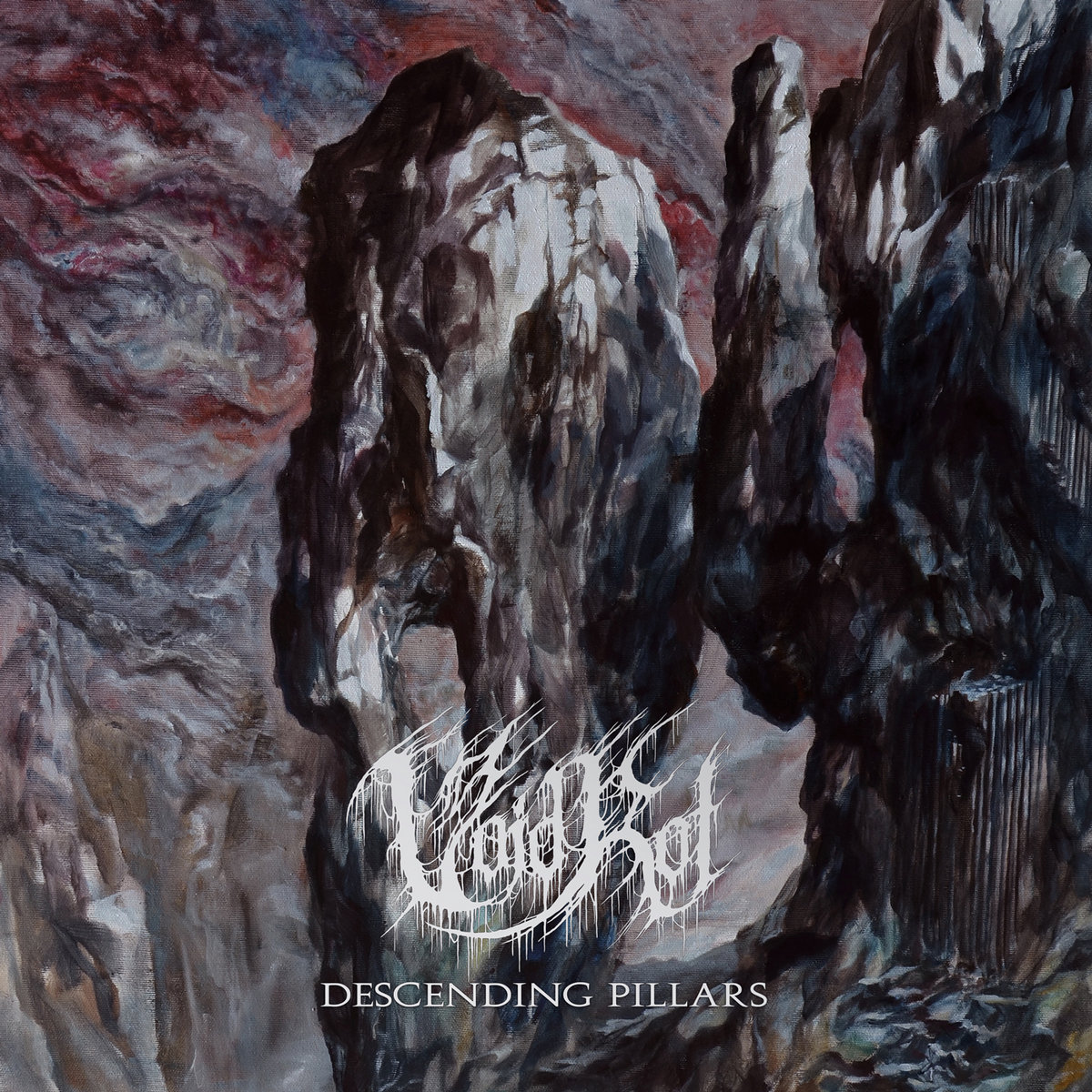 Void Rot from Minneapolis, USA, formed in 2017 with influences from the glorious progenitors of majestic, atmospheric and slow-moving death metal like Winter, Rippikoulu and diSEMBOWELMENT, as well as newer entries within the genre such as Krypts, Spectral Voice and Sempiternal Dusk. Void Rot weave light and darkness seamlessly and with unseen mastery, evoking atmospheres of the unparalleled vastness that alternate majestically between sidereal and contemplative psychedelia and visceral and bludgeoning heaviness.

With ‘Descending Pillars’, the album’s goal, it being our debut full length, was to define what Void Rot is about – the sound, the feel, the atmosphere. We already had a good foundation built up through our EP and split, so really refining those elements and picking apart the death metal, the doom metal, the atmosphere, and putting it all together as an experience. I think we approached this more as writing a book or a story as opposed to writing riffs. There’s probably more drone or long-form black metal influence here than standard death metal, to be honest. Letting the passages dwell, mutate, and grow organically was important. Overall I think we achieved it, and the response has shown that.

I wanted the closing song on the album to act as a bookend to the opener (the title track, ‘Descending Pillars’). I am, again, approaching the album as more of an experience than a collection of songs or riffs. Monolith (‘Descending Pillars’ pt II) musically actually takes the outro of the title track and expounds on that motif – it’s simple but heavy and foreboding and allows for a lot of room to use atmosphere and ambience to drive home the album. I also wanted to flip the perspective to this point; it’s all death, destruction, sci-fi in ‘Monolith’ we see through the lens of this great entity that has caused all this chaos. With that mindset, I wanted lyrics to be quite sparse—something for the listener to hear and perhaps reflect while being exposed to the bulk of the song. “I have tasted the flesh of the earth, I have consumed creation… humanity a putrid bolus… astral chasm swallows whole”. I’m proud of that song in particular, not only because I wrote a 7-minute long song using just two chords, but the lyrics I think convey that Lovecraftian horror, humanity and the earth to this ancient entity is absolutely nothing; it’s insignificant.

Even though this is our debut album, we’ve recorded both an EP and half of a full-length split (with French death/doom band Atavisma) previously. But that was only ~15 minutes worth of material each time. We’re still a relatively new band, so for the most part, the performance aspect of everything was the main focus. Sound-wise, we’ve worked with Adam Tucker (of Signaturetone Recording) and Damian Herring (of Horrendous, Subterranean Watchtower Studios) on our prior releases, so we weren’t concerned with getting the sound right – we trusted both of them to deliver on that front (and they did!) which allowed us to focus on nailing the parts. We rehearsed 3-4 times a week in the month and a half leading up to recording to have a relaxed session and think that all combined to create a very organic sound and feel to the album.

I’m always a few releases out in the future, ha. Even as we were writing the ‘Descending Pillars’ material and finishing it up, there were riffs or motifs, or ideas that came up that I thought “, OK next release, we need to revisit this” or “what about a 15-minute epic long single song at some point” or maybe a purely ambient EP of some kind. Writing for album #2 is already underway, so in five years, hopefully, that is released into the world, and we’ve been able to regain a sense of normalcy. Having a very clean break from playing shows or fests or tours has been refreshing. I write the best when an idea organically comes into my head, and I can run with it. Even not rehearsing as a band weekly has been good to re-set and let inspiration come and run with it. Before the pandemic, we played Total Death Over Mexico in March of 2020 and were on the slate to play Killtown Deathfest in September of 2020. It’s been humbling to play (be invited) to these huge fests, and what’s more fun than touring, to be honest.

I think the concept of a “scene” is dead. And that’s a good thing. The internet has made finding new music so much more accessible than ever, so all these bands worldwide can take influence from both the 90’s Finnish death/doom scene, and the 2000’s Quebec black metal scenes create something unique. You don’t have to rely on whoever you’re “stuck” with as your only sources of inspiration. Now you see bands like Assumption from Italy, who released an incredible EP (Three Appearances) that’s pure 90s Finndeath, or the concept of USBM that has pockets of bands throughout a very large geographical area. To me, that’s cool and creates more and more diverse bands doing new things and creating something unique.