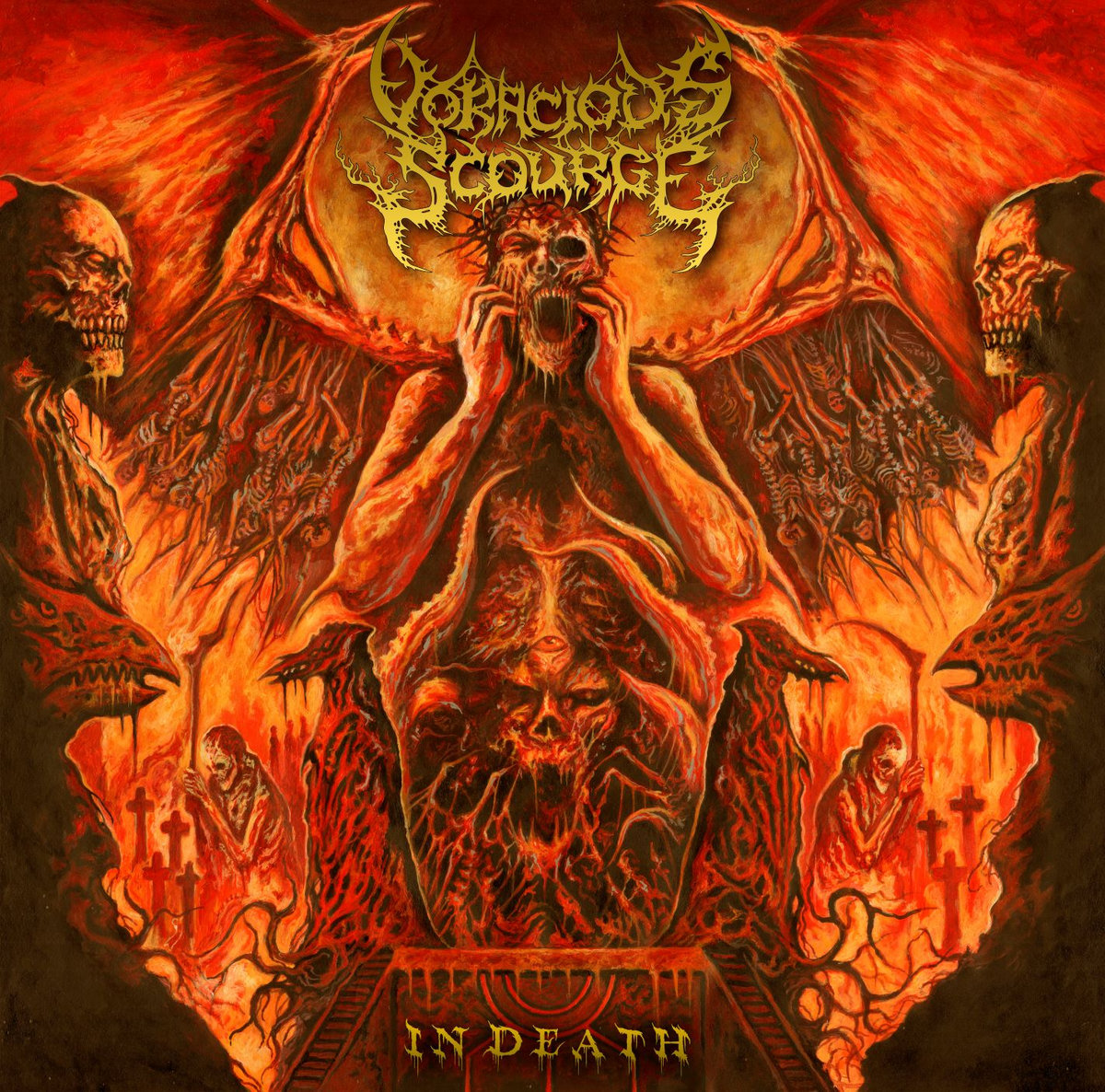 In Death by Jason McIntyre

Voracious Scourge is an old school death metal project founded in 2017 by Jason McIntyre of Louisiana Death metal act Suture. Joining him are vocalist Adrie Kloosterwaard of Dutch death metal legends Sinister. On Drums, Mike Smith ex-member of the mighty NYBDM band Suffocation, On Bass, Tony Choy, ex-member of Florida tech death metal masters Atheist and Pestilence. Rounding out the line up is Billy Richard from Cranial Sledge on guitar. Voracious Scourge released their debut four-song EP ‘Our Demise’ in the early beginnings of 2018 through Immortal Souls Records. Later that same year, the act would sign a recording contract with Massacre Records in Germany for their full-length album ‘In Death’, released in October of 2020.

We have a new album out, ‘In Death’, released by Massacre Records on October 20th, 2020. A godforsaken year that will live in infamy for multiple reasons. This new album contains eight original compositions and a cover version of ‘Born Dead’ originally written and recorded by Death. The album starts with a dark foreboding intro, ‘Retribution of the Damned’, composed by Dame Tomoski and from there dives headfirst into death metal mayhem. In short, ‘In Death’ is a celebration of death metal from the early 90s. A tribute to all the great and legendary bands and the ground-breaking albums they released during that period.  Having some of those very musicians as a part of VS is humbling and mind-blowing at the same time for me. I do not take this opportunity for granted and look forward to the next album we create together in the future.

There are several highlights I would point out if I had to review our albums. One would be the crushing production, courtesy of Jorg Uken of Soundlodge Studios, as well as, in my opinion, a great old school death metal approach to songwriting that includes a mixture of melodies, brutal riffing, guttural vocals, and a small amount of tech-inspired moments to catch the listener off guard. Other highlights would be the performances by everyone involved. They were executed with extreme professionalism and care to provide the songs with what they need instead of a chaotic free for all. There is nothing I would avoid discussing our releases because I am extremely proud of them both, from the music to the cover art to the total packing. I love creating music; it’s my passion, has been ever since I was a teen. So, no regrets and no negative feelings.

I was introduced to Death Metal early on in 1989 by Pestilence’s now classic and brutal album ‘Consuming Impulse’. It was the most extreme and vicious thing I had ever heard, and I wanted to be a part of that. After I heard that, something changed in me, and I went from wanting to play thrash metal to wanting to play Death Metal. Other albums of note are Death- Human, Deicide-self titled, Entombed- Left Hand Path, Suffocation- Effigy of the Forgotten and Sinister- Diabolical Summoning.

Voracious Scourge’s lyrics deal with all sorts of topics. Some are a little more abstract than others so that the listener can interpret the lyrics. Others are straight to the point. Some of our lyrical content deals with the dangers of religion and the rise of false prophets. The rabid lust of government to control and enslave humanity through lies fed to us by the media. Turning brother on brother, keeping the masses riled up and fighting amongst each other as they slowly take away our rights and freedoms, all in the name of greed and power.  Other topics deal with Loss and despair that eats away at your soul until there is nothing left but a hollow shell of what you used to be. Then there’s the token gore metal lyrics about an execution dealt out by a 60-ton tank. Just to name a few topics. If I were transmitting anything with the lyrical content of our albums, it’s that life is not fair, life is not easy, life is brutal, but it’s the only life we got to live it.