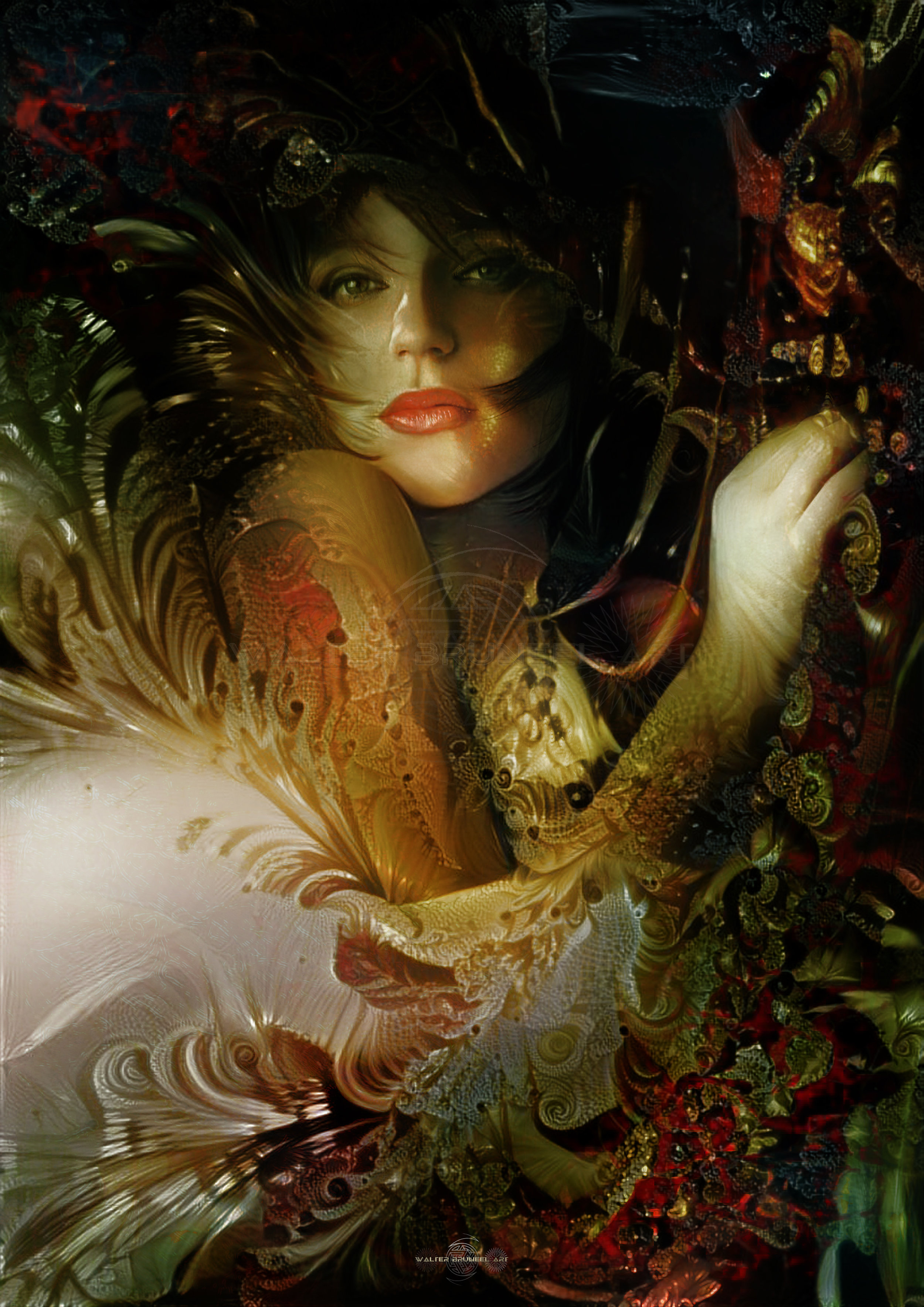 I actually started out, as far as higher education is concerned, as a student animation. I was mainly concerned then with character design and backgrounds, more than animation itself. Gradually, I noticed I had an eye for texture and light/dark opposition. Ultimately, I dropped out, and started pursuing a career that was more artistic; as that proved to be challenging as well. This was kind of the crossover period between the traditional era and the digitized way of working. I took the step to a digital animation studio, which was my baptism of fire into the digital realm. I had a convincing portfolio in terms of drawings and painting and projects, but they wanted to see if I could pull it off in a computerized environment. So I was challenged with learning Photoshop, (MetaCreations-Fractal design) Painter and 3DS Max in a sparse 2 weeks. Eventually this resulted in being the main artist and art director of a company. This company was more of a publicity, ad-driven company, doing mock-ups and packages and campaigns of food-sector products.

This really got me into the typical Photoshop stuff of retouching and enhancing imagery but also logo design, brands and generally being aware of a lot of practical things. It wasn’t glamorous, but it was a good learning school anyway. Metal has always been influenced by Fantasy and vice versa. Speaking of influence, at one point, I had made a visual, a design that would be sort of a focal point for a band composing their album. They had it hung up on the wall, near the drums.They never actually landed the contract, but I did see at one point a very similar design popping up on the cover of a then upcoming (and to be famous) thrash metal band. I inquired with the guitar player of the first band, who got talking with one of the guitar players of the other band. Apparently, they had seen the design in the rehearsal room, and decided they liked it, nicked it and just transposed the idea to their record label, that had it made according to their specifications. Now I can laugh at the whole thing, but that’s how it goes sometimes. Not to mention that aside from blatant copying, sometimes you just happen to have the same ideas. And we all get our inspiration somewhere.

The different angles and stories behind a character are also worthwhile – if you look at the evolution of the imagery of Priest, or Megadeth Repka’s Vic / Rattlehead, or Randy Berrett’s Murray (the Dio Demon), then Barry Jackson’s Last in Line and then Steve Huston’s Dream Evil – the different approaches to both album and character – Derek Rigg’s Eddie, some of the NWOBHM bands, there’s continuity. That interests me as well. A great deal of 70’ies artwork triggered me, like the Meatloaf ones and material by Rodney Matthews. So many covers really hit home hard. Motörhead has some good, iconic ones, strong logo, instant ka-boom.

It’s not just about getting the lettering as funky and dangerous-looking as possible and throw in an upside down cross for good measure. Sometimes less is more. The same with airbrush – it can kill artwork that would have been great in a more “raw” phase. Look at Frazetta. He’s got movement going, and power, and juice – and it’s not overly sophisticated, but it grabs you.

If I’d have to produce a top 5 of artists or artwork that gave me a push, there’s so many. I admire painters with a sense of the mystic or esoteric like Jean Delville – I soon enough discovered “The Treasures of Satan” and his dramatic use of dark and light, Morbid Angel picked up on that one with ‘Blessed are the Sick’ I think I must have been looking at Mikhail Vrubel’s “The Seated Demon” for an hour when I first saw that one – and Sidney Sime. He was a brilliant draftsman and excellent at light and dark, he illustrated Lord Dunsany’s tales. One of Humble Pie’s covers comes to mind with Beardsley’s work. And Maxfield Parrish. Ron Cobb, Roger Dean, Rodney Matthews, Hildebrandt brothers, Jef Bertels “Ayreon” artwork. Covers that caught my attention on the metal front ‘Somewhere in time’ and ‘Killers’ by Iron Maiden. Disturbed ‘Immortalized’ the pulp fiction mood of Five Finger Death Punch ‘Got your six’, Ghost ‘Meliora’ now this one has a very strong comic book-graphic novel feel. Opeth ‘Blackwater Park’, Dimmu Borgir ‘Death Cult Armageddon’ I like the sci-fi realism of that one.

When I was painting with traditional media, I started out with a black canvas, then defining the light and from that, the volumes evolve, and then the lines. I spend some time getting the lines defined, especially lines that suggest movement, but the heavy lifting is done on light, dark and color. I also tend to look for optimisation, see how dark I can get a part of the painting without it loosing its shape, and enhancing that by adding a glow or rim of light – (laughs) now this gets really technical and sometimes I count my blessings working digitally, as this enables me to tweak all this, sometimes saving different stages because there’s one where the hues were perfect but the other got the lines right.

I used to look hard at how guys like Frazetta and Vallejo and the Hildebrandt brothers did things – the fantasy godfathers. The rule of thumb: cold light, warm shadows, warm light , cold shadows, is one that applies but you can take artistic liberty with that once you understand the mechanics of it. Just like music – know the rules, then break them. I’m a texture nut; I have been working extensively on things like fabric and sheen and glistening, velvety, metallic, ornamental, leathery, rusty, you name it, textures.

Music is obviously a major inspiration to me. Aside from metal, I listen to a lot of other music, whatever inspires me. That could be Lisa Gerrard or Sheila Chandra or the soundtrack from From Hell, the Ninth Gate, Hellbound, The Fountain, just naming a few that come to mind. I like eerie atmospheres, with a fun aspect – there’s Johnny Hollow, and Paul Roland, who has made a career out of singing about Victorian and Gothic subjects. I have an array of playlists that set a mood, and this is work in progress as the lists keep expanding and I’m in dire need of extra Terabytes (laughs). There’s a werewolf list, a full moon list, a vampire one… Dark carnival, sinister double… I gave them movie-like titles.

Symbolism is part of my life, so it goes without saying that it is the core of my artwork. However, I can very easily tune into a subject, and get to terms with the essence of it. The Western Mystery Tradition is dear to me. I have been a teacher energy work for 25 years now, and I have no doubt whatsoever about the reality of the so-called other realms and their denizens. The only thing is, at a certain point, you tend to outgrow the dichotomy of good and evil and you integrate both.

Some of the names like gods, angels, demons, spirits. They are labels, that very much depend on the frame of mind and point of view of the one applying them. Lon Milo DuQuette has a good quote, where he says: “it’s all in your head, but you have no idea how big your head is”. In terms of Spirits, I do not tend to consider them as dissociated energies, like, psychological by-products, but as autonomous beings with likes and dislikes. All deserve respect. There is a tremendous Renaissance of Grimoire Traditions, Solomonic Magic, Sorcery, and new angles to all that. There is a Magick revival going on now for some time, with a lot of cross-breeding with other traditions, hoodoo, conjure, rootwork, African traditions, Balkan- sorcery, Roman Gipsy spells – you name it. My main frame of this kind of work is related to the Tree of Life.

I love Jim Butcher’s The Dresden files, and used to read a lot of fantasy and sci-fi, Clive Barker, James Herbert, Bradbury – but now mainly books on the occult and grimoire tradition or related. I have a deep interest in the whole exo-politics scene as well, alien races, interdimensional travel, topics like the Montauk timegate, mind control, the Philadelphia experiment, hollow earth, and all the fantastic stories of otherworldly beings like Springheel Jack and Tmirror worlds, alternate realities.